For most people summer is synonymous with pool parties, cold beverages, music festivals, and slip-n-slides. However, in the fantasy football community, it signifies the start of the Scott Fish Bowl, a massive charity-based tournament that usually kicks off around July 4th.

This year’s SFB12 will feature 2,400–3,000 fantasy football enthusiasts comprised of industry professionals, fanalysts, and folks who just love to play fantasy football. There are even some celebrities in the form of actors, musicians, and professional athletes. The tournament has grown from its humble beginnings over the past decade, but the charity component, masterful scoring configuration created by Fish, and healthy competition are still a massive part of this cherished community event.

SFB12 is set up in a way for so many different approaches to be successful, but I will provide some insight into this macro-tournament based on the scoring structure for 2022’s version.

Editor's Note: This year's SFB Podathon will donate proceeds of their fundraiser to the Fantasy Cares Toys for Tots drive. Donate here to help a worthy cause.

Getting familiar with a league’s format and scoring system is imperative when starting any fantasy football draft, and SFB12 is certainly no exception. Rolling in with your normal cheat sheets will not serve you well here.

There are no defenses, no trading, and weekly waivers are done via blind bid with a $100 budget for the season. One note of significance is the return of the third-round reversal, meaning the direction of the snake draft reverses at the end of the second round, so the team in the 12th spot selects again to begin Round 3. The draft then continues to snake with no further reversals. 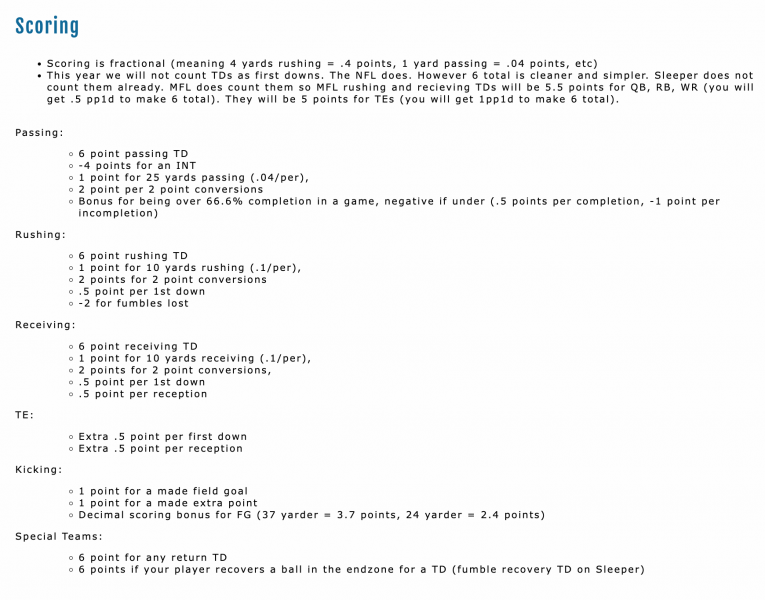 If you played in last year’s tournament you’ll see that the scoring remains mostly the same, with a few tweaks of course since it is a league created by Fish. For QBs, there is now a bonus for being over 66.6% completion in a game, negative if under (.5 points per completion, -1 point per incompletion), and there is no longer a one-point penalty for sacks.

We still have half-point scoring for first downs and receptions for running backs and wide receivers, with a full point granted for tight ends in both of those categories.

Kickers no longer receive negative scoring for missed field goals and extra points and get a point for making a field goal on top of decimal scoring. We still have a player’s ability to score points for a return touchdown or a recovery in the end zone for a touchdown.

Let’s get into some of the biggest beneficiaries and losers in this scoring format compared to regular half-PPR scoring. We used John Paulsen’s season-long projections, tweaking them for SFB-specific scoring.

Aaron Rodgers benefits the most of any signal-caller, due to his high projected completion percentage, and his 390.0 points are projected to be the QB2 in SFB scoring after only Josh Allen’s 417.7. Mac Jones spikes up six positional spots from QB24 up to the 18th highest-scoring QB, while both Jared Goff and Davis Mills get advantages in this format and bump up five QB spots each.

The discrepancy at RB isn’t too significant, but the beneficiaries here are the backs who aren’t as involved in the passing game, since they make up the gap with projected first downs. Rookie Ken Walker moves up four positional spots into fantasy RB3 territory, while Michael Carter, Tyler Allgeier, Nick Chubb, and Dalvin Cook all get slight spikes due to the SFB-specific format.

At wideout, rookie Alec Pierce gains the most from SFB scoring, as he’s projected to post 33.6 first downs in 2022 in an offense where he could slide right into WR2 work behind Michael Pittman. Kadarius Toney shares that six-spot spike, becoming a WR4 in this format. Jarvis Landry, Robert Woods, and Brandin Cooks all move up three positional spots, with receiving first down projections of 38.0, 42.5, and 52.2, respectively. New Titan WR Woods is also slotted for 5.9 rushing first downs in 2022.

As usual, TE doesn’t provide much excitement or movement, even in the SFB format. Mike Gesicki gets a small three-positional spot jump from TE17 up to a fringe fantasy TE1 territory. With an extra .5 point for first downs and receptions, he leapfrogs Robert Tonyan, Cole Kmet, and Pat Freiermuth due to his higher projections in both categories (58 catches, 35 first downs). Relative to other positions, however, tight ends get a huge bump due to the tight end premium format.

More QBs take a hit in value than reap the benefits in this scoring format. Jalen Hurts falls down 10 spots to a fantasy QB2, while Trey Lance, Justin Fields, and Jameis Winston all dive down to lower-QB2 territory. Zach Wilson finds himself as a QB3 in SFB points, all most likely due to the negative points for a low completion percentage on a weekly basis.

There isn’t too much movement at the RB position, with the most relevant guys—Saquon Barkley, Kareem Hunt, and Darrell Henderson—all sliding down two positional spots in this format. It seems you can draft RBs similarly to the way you’d approach them in regular half-PPR leagues.

John Metchie has been a late-round dart throw in best ball formats throughout the summer, but it appears you can leave him for the waiver wire in SFB as he falls a whopping 26 WR spots in Fish’s scoring. 2022’s polarizing wideout Gabriel Davis also falls in this format, along with Keenan Allen and Terry McLaurin who may lack the first down volume to produce as expected in other leagues.

As I mentioned above, some TEs fall in SFB due to lower projections in both receptions and first downs in 2022. Dawson Knox still remains a fantasy TE1 with his two-spot slide, while Pat Freiermuth and Robert Tonyan both fall a little deeper into the TE2 zone.

It wouldn’t be an article written by me without some sort of kicker love so here it is. Without negative points for missing field goals or extra points, legs get a boost this season and should be highly considered when filling out your 22-man roster.

Here is where kickers start to make their way into projections so you can get an idea of when to contemplate taking them.

Draft Strategy
How to Not Lose Your Fantasy Football League in the First Round
by Pranav Rajaram · Aug 08, 2022
Related Articles