This year, I’ve typically been implementing a combination of strategies that include Hero RB, Stud TE, and Late-Round QB. It will usually begin with a running back in the first round, but there are Hero RB candidates available in the second and third rounds this season.

I went into great detail on a position-by-position basis in my annual Draft Day Strategery article, but now I’m going to go round-by-round and highlight some targets, strategies, and “shy-away” players to avoid.

Note: I’ll include Underdog ADP and positional ADP ranks to provide an idea of the availability of each player in any given round. Underdog ADP is pretty sharp, so managers in a typical friends and family league should be able to wait a round longer on most of these players, especially in the middle and later rounds. These draft targets assume a half-PPR scoring format, though small adjustments can be made for full-PPR.

If I’m drafting in a position where I don’t think I’ll be able to get a stud tight end in the second round then I’ll pivot to receiver in the first round–assuming Jonathan Taylor and Christian McCaffrey are off the board–and then draft a running back in the second round.

Austin Ekeler (ADP 6, RB3) and Derrick Henry (ADP 8, RB4) are excellent Hero RB candidates sometimes available in the mid-to-late-first round. Dalvin Cook (ADP 9, RB5) is also a possibility, though his history of shoulder injuries worries me a bit.

Whether I draft a receiver or a running back in the first round, I’m typically targeting Travis Kelce (ADP 13, TE1) or Mark Andrews (ADP 22, TE2) in the second round to lock up a major advantage at the tight end position.

Davante Adams (ADP 11, WR5), Stefon Diggs (ADP 8, WR4), or CeeDee Lamb (ADP 14, WR6) are solid picks near the 1st/2nd turn as well. Once they are off the board, I’ll typically ignore receiver until the third round.

Shy-Away (Update 8/27): I'm no longer avoiding Alvin Kamara (ADP 18, RB11), but I am worried about his overall workload with Mark Ingram in the mix. Last year, he averaged 24.4 touches per game without Ingram but just 16.8 touches per game in four games with a healthy Ingram. (The same thing happened in 2017-2018; Kamara saw 14.3 touches in 27 games with Ingram versus 22.8 touches in four games with Ingram sidelined.) That still yielded 16.5 half-PPR points per game, which is typically good enough for Top-7 type numbers. The Saints are also pretty loaded at receiver with Michael Thomas back and both Jarvis Landry and Chris Olave added to the receiving corps, so Kamara's target share may take a hit as well. I'm not too worried about his legal trouble, though there's a small chance that there's a surprise (i.e. the video of the incident is leaked) that forces the league's hand in 2022. I've bumped Kamara up a bit since he looked good in the preseason and I'm bullish about this New Orleans offense as a whole, but I wouldn't target him ahead of ADP.

Here are Kamara's splits. His games with a healthy Mark Ingram are on the left. 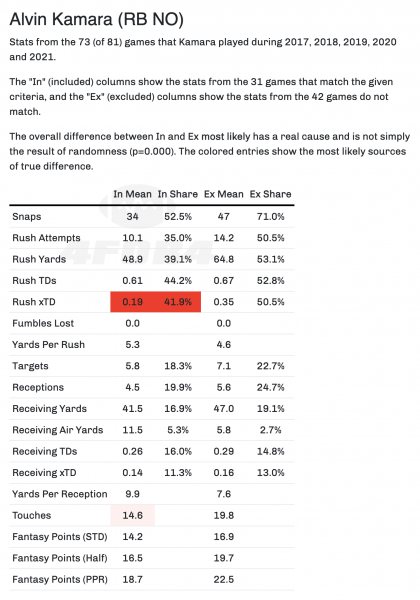 I’m typically avoiding second-round receivers Deebo Samuel, Mike Evans, and Tyreek Hill, though they could very well return value and I’d be happy to nab any of them if they slipped into the third round.