We have joined forces once again to bring subscribers Draft Hero, an incredible tool designed to optimize your fantasy team at every pick. It conveniently comes pre-loaded with 4for4’s award-winning player projections for all formats, including standard and PPR, and now features a brand new home page with the latest player news and more. In real-time, Draft Hero provides a color-coded, top-down view of your entire draft, displaying pick recommendations, player value rankings, customized draft plans, fantasy rosters, NFL depth charts, and much more. This season's version is easier, faster, and includes a more intuitive layout and features!

This article will outline the process of setting up a league and highlight some of the key features the software has to offer. I recommend that you open Draft Hero in a separate window in order to get the most out of this tutorial.

For those who want to get right to it, follow these easy steps.

NOTE: If you are a Classic Subscriber, you do not have access to league import (Step 4) nor live draft sync. To add a league, you must click on "Add My League" and select on of the many site template choices. Then you can go straight to Step 5. To access league import and draft sync to all league sites, you must upgrade to the Pro plan.

For a more detailed description of DH's useful features and how to set up your league to take advantage of them, keep on reading.

Editor's Note: Click Here for an In-Depth Video on the League Sync Feature

Setting Up Your League

Under tools on the 4for4 site, head to the Draft Hero landing page and click on the “Launch Draft Hero” button. On the top left of the page, you’ll see an “add league” button. Once clicking the button, you are given the option to automatically synch your league using the new chrome extension, or manually add a league using one of a variety of site templates. There's a helpful video under "Getting Started" that goes over live syncing or manually adding leagues.

Once you’ve created your league, all the settings options will appear in the center section, be sure to double-check league specifications. This allows you to choose the type of draft you’re participating in (snake, straight, third-round reversal, etc.), the number of rounds, team names and spots, roster and starter requirements, and sync info, when applicable. There will be an edit button on the left side of each category, along with a save button once inside each specific section. There is also a sync button at the bottom of each category, as well.

NOTE: If you are importing an existing league from Yahoo, ESPN, NFL, and the like, your league settings should automatically appear under both general setting and scoring rules. Double-check that they are indeed correct and be sure to select your team name and draft spot so that the app knows who it’s recommending picks for.

Once all the settings are in and your league is set up, select the "Draft App" button on the left side.

If you want to be super familiar with the software on draft day, a mock draft is an excellent way to play around and get comfortable. Once your league and draft are set up, simply click on the "start mock draft" button on the top right of Draft Hero. Once started, there are buttons directly to the right offering to undo the last pick, auto pick, or restart the whole draft. Mocks are run using ADP with some degree of randomness, so all mock drafts will be different. Playing around with mocks is a solid way to explore different draft strategies until you find the one that’s right for your league and your particular draft spot.

If you have the Pro version, this is when you want to double-check that your league is synched with the Draft Hero. For classic subscribers, be sure your league imported manually during set up above.

Once launched, you’ll see recommended picks and watchlist on the left, the center which houses rankings, draft boards and both fantasy and NFL rosters, and then the draft list as it happens live on the far right.

The gear icon on the far right is where you are able to add some of the pro options that were found in previous versions of this tool, get answers to FAQ and also ask for help. Pro options include selecting to show a summary of the draft grid at the top which shows the first two rounds.

You can also add a draft plan to the right side which suggests optimal picks as the draft proceeds, including a button to avoid certain players if desirable.

The far-right shows the status of the draft, with all picks taken over the last round, plus the ability to toggle between rounds. Also under the gear icon you can choose a draft strategy by position. The default on this is to optimize by core starters (QB, RB, WR, TE, plus a backup RB and WR), however, you can choose to optimize the entire team or customize, which allows you to weight each position differently based on your preferences. There is also the ability to hide or show stretch picks, which are players above their average draft position (ADP). Be sure to click save changes at the bottom when you are finished.

The far-left pane features a “Recommended” picks button, and when clicked you’ll find a list of the five best players on the board, along with their ADP and 4for4's projected fantasy points. You’ll also see “ARV” here, which is also shown as value above replacement. This refers to the value of a player compared to the player in front of him. For example, if comparing Saquon Barkley to James Conner, Barkley is projected for 204 points to Conner's 200. Their “ARVs” are +64 and +60, a difference of four, which signifies that Barkely is projected two points above Conner.

Below the “Recommended” button which showcases the optimal players, use the dropdown box to filter by specific position if you want to see the top five options at QB, RB, etc.

The center pane includes four highlighted tabs (five if you added the draft plan from the pro gear icon):

This shows overall rankings by ADP in the far left column, then position-by-position across the board. You can select your draft pick from this list and research ahead for your next several draft choices. Some helpful data for each player can be found here, including ADP, bye week, projected fantasy points, and ARV score if you're chosen that option from the gear icon.

Here you will find the draft board live as it progresses in an easy-to-read format. The bottom slides across to accommodate all teams in your league.

This keeps track of your league’s rosters in real-time as they are being drafted round by round. The chart is conveniently color-coded by position, similar to everything we see in Draft Hero. Starters are located on the top half, with bench players listed on the lower portion of the screen.

Pretty self-explanatory, this section shows each NFL team’s roster in vertical columns. You have the ability to sort the teams alphabetically, or by offensive rank. Players are highlighted with their positional color once they are off the draft board. 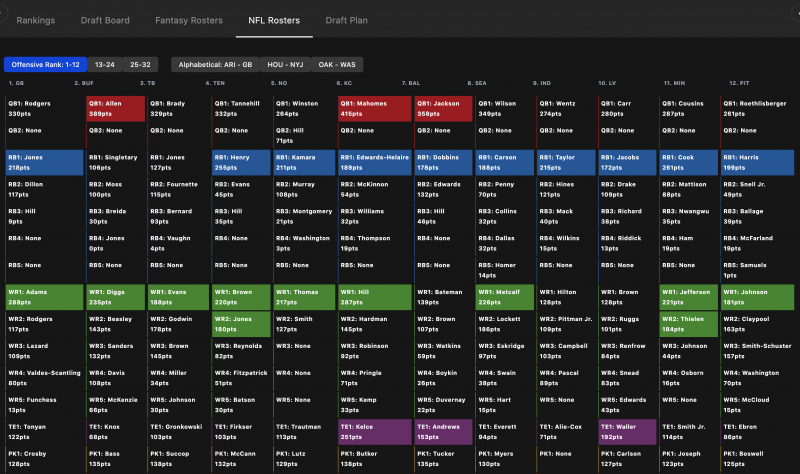 If you chose to include a draft plan from the gear icon at the start, this tab will offer an optimal pick for you round-by-round with suggestions at each position. Once your player has been drafted, they will be listed in order and as always color-coded by position. Here you can also go in and select "avoid" for specific players you do not want to be suggested.

Draft Hero is a game-changer and we feel that you will love using the software once you are comfortable with its features and distinct advantages.

The basic software is free with your 4for4 classic subscription, and 4for4 Pro and DFS subscribers also receive full access to unlimited live sync and league importer, which allows you to automatically import all of your league's settings and the ability to sync with your draft as it happens (it will auto-cross players off). This normally costs $46, but it is included for free in your 4for4 subscription

Kick back, relax, slip into your comfiest loungewear, and take some time to familiarize yourself with this amazing software tool. Your fantasy team would thank you if it could.