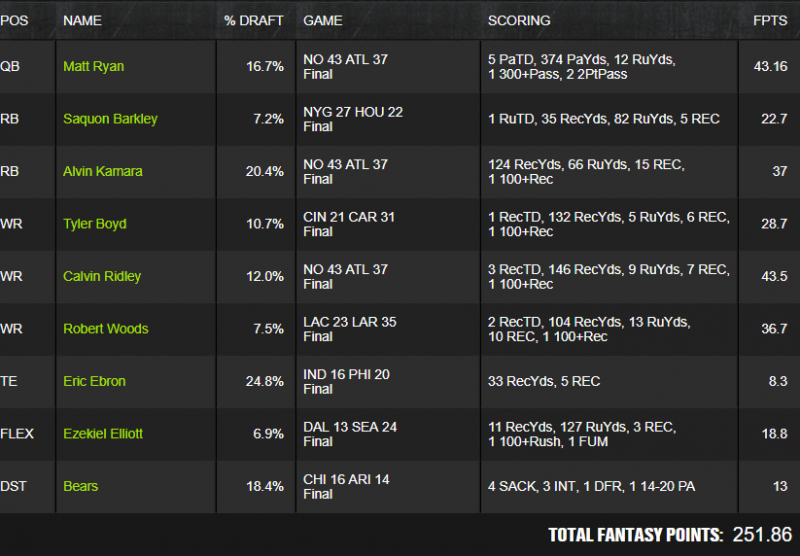 With just three entries in the Week 3 Millionaire, TheHodgesFactor paired one the most popular quarterbacks of the week with his secondary receiver. Julio Jones drew ownership nearly three times that of Calvin Ridley but the QB/WR2 correlation is the second-strongest player combo. To leverage both offenses in a game with a massive over/under, TheHodgesFactor added Alvin Kamara for a classic game stack.

Unlike the first two weeks, Week 3’s Millionaire winner stopped at a 3-man game stack, instead of going with a full onslaught, and focused on a trio of low-owned players that had underperformed relative to their volume.

Week 3 was a great reminder that, even in short time periods, fantasy scoring usually reverts to volume-based expectation. Going into the week, Ezekiel Elliott and Saquon Barkley ranked one and two respectively, in percentage of team touches among active players. While their fantasy output had been good, their production was also overshadowed by monster starts by players like Alvin Kamara and Todd Gurley. Volume gives any running back tournament-winning upside, even when their teams don’t have massive scoring projections. Elliott and Barkley popped in last week’s leverage scores and were highlighted as running backs to target in my weekly slate breakdown.

Along with volume, air yards have proven to be a reliable predictor of production for receivers. Each week, Josh Hermsmeyer writes a free column highlighting players that are due for big weeks based on their air yards and usage. Robert Woods showed up in Josh’s model in consecutive weeks and Woods’ volume finally turned into a massive game. If you missed Josh’s article last week, the Rams passing game was one that I was targeting in tournaments. 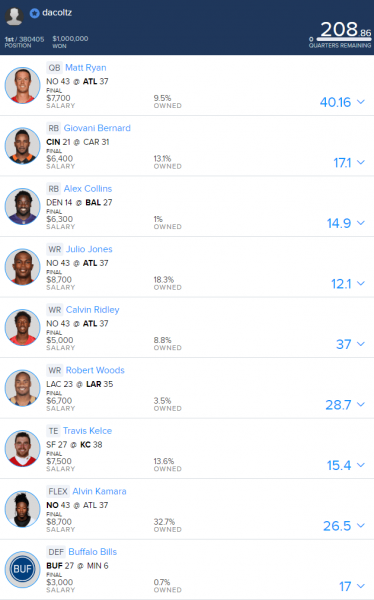 dacoltz was slightly more aggressive with his ATL/NO game stack compared to DraftKings’ million dollar winner, adding Julio Jones to the mix. While Julio put up mediocre results, this lineup is a reminder that zeroing in on the right game can take down a major tournament even if one of those players underperforms. Having some exposure to the high-powered Chiefs offense remained a must and with heavy ownership on Eric Ebron and similar price points for Travis Kelce and Zach Ertz, Kelce’s ownership stayed in check.

Alex Collins hasn’t been the workhorse that most fantasy owners expected, but we’ve seen players win DFS tournaments before with decent performances from a running back in a timeshare—Phillip Lindsay was a great example in Week 2. Baltimore was a significant home favorite and game script allowed enough volume for both Collins and Buck Allen to turn in respectable performances.

The only argument for the Bills defense is that they were opposite a defense that was going to push 20 percent ownership, a massive number for any team defense. Though there were no indicators that this was the spot to go contrarian, this is a nod to the fact that defensive scoring is the highest variance of all roster spots and there should be differentiation in any lineup portfolio.

Seeing players like Zeke and Robert Woods pop in winning lineups is a warning against ignoring volume and a reminder to keep player performance in context. One way to do that—besides looking at raw volume—is to consider touch shares. Specifically, I look at percentage of team targets for pass catchers and percentage of backfield, and total team touches for running backs.

A running back who accounts for a huge portion of his team’s touches but is stuck in a mediocre offense, for example, could go overlooked in a week where his team might suddenly find themselves in a favorable game script.

Use the following touch shares as a guide to possibly uncover some of Week 4’s hidden gems:

Tournaments
The Top DFS Running Back and Defense Stacks: Week 4