Picking at the turn in fantasy drafts is always an interesting spot, and this year is no exception. Because of the level of control you have with back-to-back picks, there are several different ways in which you could go about assembling your team. In this draft, I’m going to be experimenting with the Zero-RB draft strategy. This type of drafting involves loading up on receivers, tight ends, and quarterbacks in the earlier rounds, largely ignoring the running back position. Then, after filling out those positions, you can take a lot of shots at running backs in the later rounds. The strategy was created to help fantasy managers take advantage of the increasingly pass-heavy NFL, and avoid injury risk with elite running backs.

One of the obvious advantages of deploying this strategy is the immense depth and strength you will have at all the positions besides running back. With this being said, the downside is that if the shots you take at running back don’t pan out, you might be scrambling to find starting-caliber players during the season. If you do choose to use such a strategy in your drafts, the most important thing to keep in mind is always be flexible. While you might have decided to only take a running back late in drafts, if someone elite falls to you that wasn’t expected to drop that much, then please take that player. 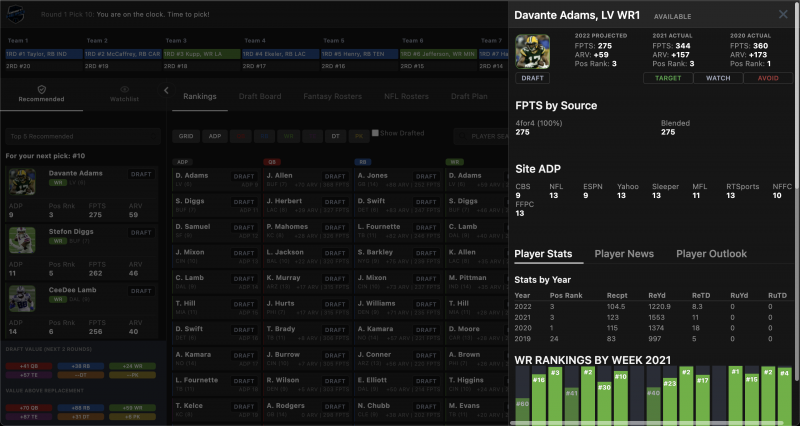 What better way to start off our Zero-RB draft than with arguably the best wide receiver in the NFL. While Adams is apart from Aaron Rodgers for the first time in his career, he still should be great for fantasy. He’s the clear top receiving threat in the Raiders offense and has an established connection with Derek Carr (the two were college teammates). It is possible he sees a little less volume due to competition from guys like Darren Waller and Hunter Renfrow, but Davante will still get more than enough targets to be a rock-solid WR1 for our team.

If you aren’t trying out Zero-RB and want to take a running back, Adams’ former teammate Aaron Jones or Lions back D’Andre Swift are great picks here. They are both RB1s on their team and excellent pass-catchers, giving them a valuable floor-ceiling combo.