The seventh spot in a 10-Team league is one of the most flexible spots for fantasy managers this season. There are several different ways in which you can start off your draft that would lead to many different styles of teams. One advantage of picking seventh is that it is your pick will always come in the middle-third of the round, making you less susceptible to suffering from long positional runs. At the same time, you might find yourself in draft pick purgatory, never being able to get the most elite players in each round.

In this article, I will walk through a perfect draft with the seventh pick in a 10-team ESPN PPR league. Each pick was optimized using projections and value-based rankings from the 4for4 Draft Hero tool. 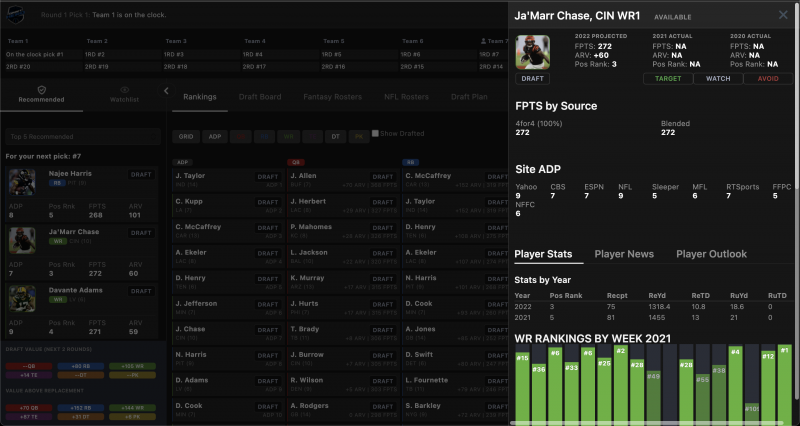 With four running backs (Jonathan Taylor, Christian McCaffrey, Austin Ekeler, Derrick Henry) and two wide receivers (Cooper Kupp and Justin Jefferson) going off the board in the first six picks, I’ll take the best receiver available in Ja'Marr Chase. Chase had one of, if not the greatest rookie WR seasons of all time, tallying over 1,400 yards and 13 touchdowns en route to a WR5 finish. While it’s possible Chase is due for some touchdown regression, he has the talent and will see enough volume to still be an elite option. His inconsistency might be a little frustrating, but his boom weeks will make this pick well worth it.

Here's a table that shows the top rookie receiving seasons since 2000. As we can see, all but one of these players improved on their rookie yardage total. This is a great sign for Chase, who could realistically lead the NFL in receiving yards this year.

If you’d like to go with a running back in the first round, the Draft Hero has two great suggestions in Najee Harris and Dalvin Cook. Both Harris and Cook are three-down backs that should be among the top of the league in touches if healthy. They will be dependable RB1s for your team week in and week out.