The ninth spot in fantasy football drafts this year might be one of the most confusing places to pick from. There is a wide number of different ways in which you could go about building your team, leading to some questions on which strategies would be the most optimal. One advantage to picking ninth is that there is a little more control than if you were picking in the middle of the round, as you’ll have selections that are just seven picks apart. With this being said, there is also a long, 17-pick turn, which could leave you as a victim of positional runs.

In this article, I will walk through a perfect draft with the ninth pick in a 12-team ESPN PPR league. Each pick was optimized using projections and value-based rankings from the 4for4 Draft Hero tool. 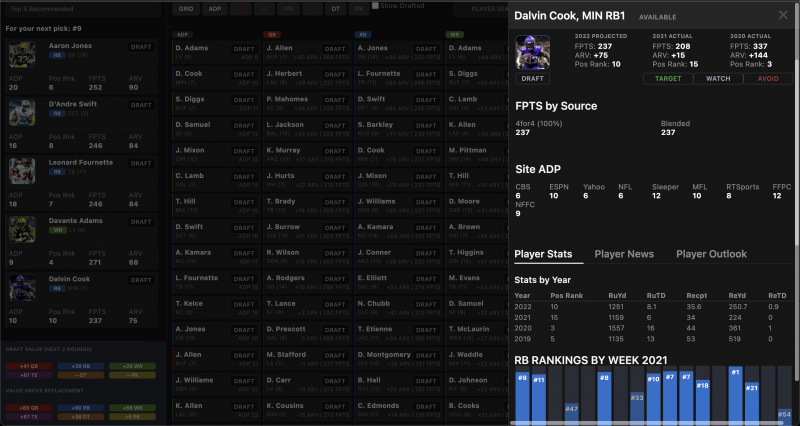 With five running backs and three receivers going off the board in the first eight picks, I’ll take the best player on the board in Dalvin Cook. Dalvin was a little bit of a disappointment last season, only finishing as the RB15. However, his situation and talent still warrant him being drafted this high. He is the clear #1 back in Minnesota and is locked into a large number of touches. He’s also a solid pass-catcher, with the ninth most targets amongst all running backs since 2019. Throw in the fact that he’ll be in a modernized system under new head coach Kevin O’Connell that should improve the Vikings offense as a whole, and Dalvin has a great floor-ceiling combo which we want in an RB1.

The Draft Hero suggested three other running backs, but I think that they are in a tier below Dalvin. If you’d like to start your draft with a receiver, Davante Adams or Stefon Diggs are probably the best bets in the back of the first as they will see plenty of targets and are attached to good quarterbacks.