Being in the front of a Superflex draft guarantees you’ll get an elite QB and if desired, another starter in Round 2 since not all drafters will be gunning for signal callers. I prefer to draft my QBs early in this format, as playing chicken with the position can be risky, and has certainly burned me in the past. The downside to the first draft spot is that you can fall victim to positional runs later on and may be chasing certain players, but there’s always the chance to start long runs as well.

In this article, I will walk through a perfect draft with the No. 1 pick in a 12-team superflex PPR league. Each pick was optimized using projections and value-based rankings from the 4for4 Draft Hero tool. 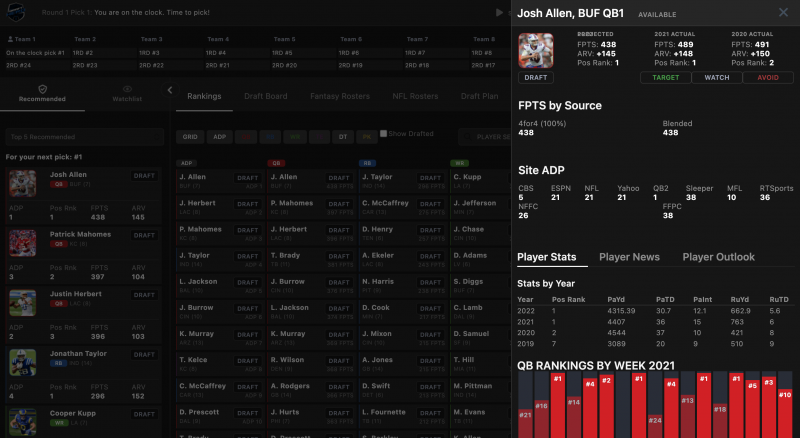 This is a no-brainer selection for me as Josh Allen is the clear top choice at QB and should post the most fantasy points in 2022. As mentioned above, I really like securing two top QBs in superflex formats, as it’s tough to beat elite QB play week in and week out.

The Draft Hero agrees with my choice here, as Allen’s 438 projected points is the highest among all players, and over 40 estimated points higher than both Patrick Mahomes and Justin Herbert, the next two QBs in line. If you wanted to wait on a QB and go with another position, Jonathan Taylor would be the one to take here, and he’s the software’s fourth choice after all signal callers.