The sixth pick in fantasy drafts this season is a very interesting one. Depending on how the top of the first round goes, there is a multitude of different possibilities for how your team will look. For example, you could take running backs in the first two rounds and then hammer receivers in the middle, or take receivers early and punt on the RB position. This flexibility makes the six spot one of the most fun and dynamic places to draft this year. One downside, however, is that there is a chance of getting stuck in draft pick purgatory. Because you will be picking in the dead center of every round, there’s very little control between selections, and you could fall victim to long positional runs.

In this article, I will walk through a perfect draft with the sixth pick in a 12-team ESPN PPR league. Each pick was optimized using projections and value-based rankings from the 4for4 Draft Hero tool. 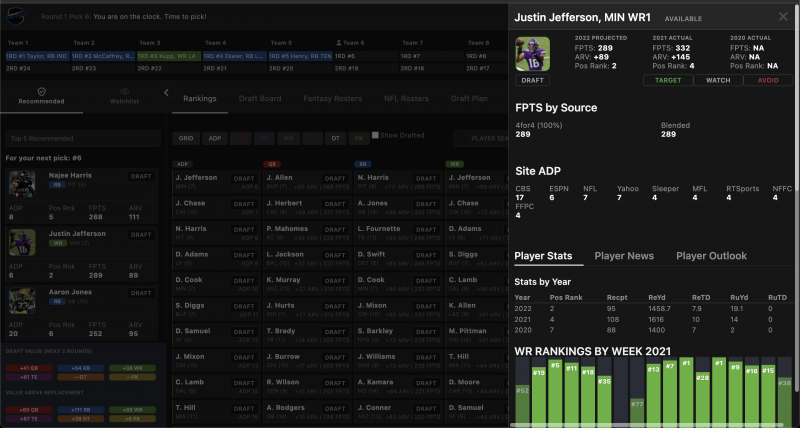 With four running backs (Jonathan Taylor, Christian McCaffrey, Austin Ekeler, Derrick Henry) and one receiver (Cooper Kupp) going off the board in the first five picks, I think Jefferson is a phenomenal way to start off our draft. The former LSU superstar has had the greatest start to a career for a wide receiver in NFL history, with back-to-back seasons of over 1,400 receiving yards. Add in the fact that Jefferson will be in a much more modern offense with Rams offensive coordinator Kevin O’Connell coming to town, and Jefferson should only see more volume and opportunities. There’s a real chance we just drafted the overall WR1 for this season, especially in a PPR format.

The Draft Hero suggested taking running back Najee Harris over Jefferson. Najee is also a great first-round pick, as he is the betting favorite to lead the NFL in touches. However, the offense that he is in is far worse than Jefferson’s, so Najee might not have the same upside. If you do want to take an RB here though, Najee would be the optimal pick over someone like Dalvin Cook. Some of the other options at receiver include Ja’Marr Chase and Davante Adams, but I prefer Jefferson over both.