The Breakout Receiver Model returns for the final week of the regular season, and we’re going out with a bang, as the model posted one of its best weeks of the entire season in Week 17. 45% of all listed players met or exceeded expectations, and listed player scores were, on average, within 10% of expectations. The model clearly isn’t hampered by late-season playing time and personnel changes, an impressive feat within itself. With this being the last breakout receiver article of the season, let’s touch on some hits and misses from last week, hand out a few season’s end superlatives, and then dig into the week ahead.

The 4for4 data science team, in conjunction with our award-winning projections expert John Paulsen, have recalibrated and reconfigured the receiver "buy-low" model from years past in order to better identify under-performing wide receivers and tight ends who might be on the verge of a breakout performance. For the uninitiated, the breakout receiver model utilizes historical data and recent player performance to help determine players who have received opportunity that is typically more valuable than their recent production would indicate. This particular model's features include air yards and routes-run data as a means of determining opportunity. It also utilizes a proprietary efficiency metric that looks back at the past 10 weeks of individual player performance, all to better help predict the likelihood of a bounce-back in a player's future production. The model most heavily weights the last three weeks of data. 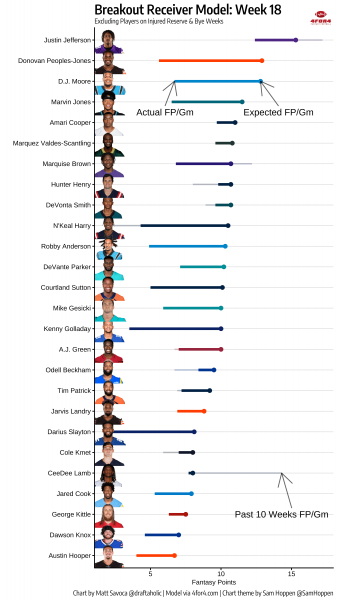 While we usually pull a few nuggets about this week's chart within this section, we'll hand out a few end-of-season awards, as determined by the model.

Team with the Most Breakout Candidates: Baltimore Ravens (24)

Tight End with the Most Breakout Model Appearances: Cole Kmet (11)

More from Matt Savoca
Most Popular