The Breakout Receiver Model returns for Week 14. There are a ton of intriguing breakout recommendations to dig into this week.

Tyler Lockett and Michael Pittman are the standout performances of the bunch from last week. Lockett just barely made last week’s list after a quality Week 12 against Washington and followed it up with seven catches for 68 yards and a score, good for his best fantasy output in four weeks. Pittman caught six of his eight looks, and even earned 33 rush yards on two carries. Odell Beckham didn’t have the most productive day, earning fewer than 30 yards through the air, but saved his day with a touchdown catch, helping him come within 0.2 fantasy points of expectation.

Chase Claypool was a massive disappointment compared to expectations in Week 13. Claypool was blanketed by Ravens’ cornerback Anthony Averett and earned just three targets, a season-low. Marvin Jones tied at his season-low with three targets as well, and is the only other receiver besides the injured Corey Davis who is 9.0 or more points below their rolling three-week expectations. After a 100-yard game in Week 6, Jones has failed to reach 50 yards receiving in all but one game, and hasn’t scored in six weeks. A hand injury may have had something to do with it, but Taysom Hill’s insertion into the New Orleans offense didn’t help Marquez Callaway or Tre’Quan Smith, as Deonte Harris gobbled up the majority of the limited passing volume in the Saints’ loss to Dallas last Thursday night. 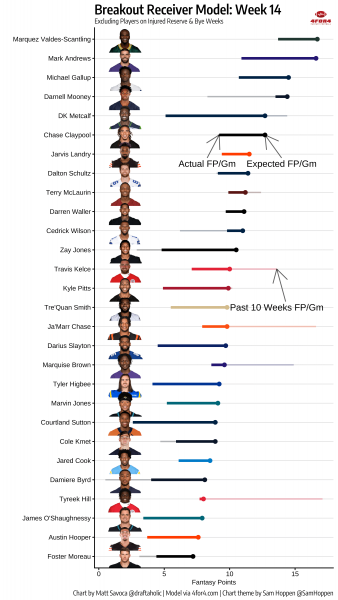 We split the breakout candidates into two categories. The first is the primary model results, also visualized in the graph above, which highlight players who are under-performing their expected fantasy point value by more than five percent. Next, we'll offer some dart-throw plays for DFS players and for season-long teams struggling with injuries who need a last-minute replacement. Use this in conjunction with John Paulsen's sneaky starts column each week.

Season-Long
Gearing Up for the Fantasy Playoffs: Week 14