The Breakout Receiver Model returns for Week 16. We had another 30%-plus hit rate week in Week 15, and players in the model, on average, scored 98% of their expected fantasy points. That’s the second straight week we’ve seen that rate top 90%, a strong indicator the model is improving with more in-season data. Let’s touch on some hits and misses from last week, and then dig into the week ahead.

Note: Click the image to view it in a higher resolution. 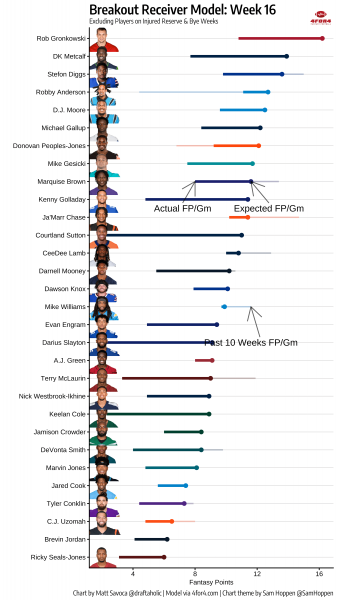 We split the breakout candidates into two categories. The first is the primary model results, also visualized in the graph above, which highlight players who are under-performing their expected fantasy point value by more than five percent. Next, we'll offer some dart-throw plays for DFS players and for season-long teams struggling with injuries who need a last-minute replacement. Use this in conjunction with John Paulsen's sneaky starts column each week.

More from Matt Savoca
Most Popular