Lawrence had a very solid outing on Sunday. He took advantage of a soft matchup versus the Titans, posting over 250 yards and two touchdowns en route to finishing as a top-10 QB on the week for fantasy. Lawrence has made his impact on the run game pronounced the past two weeks, scoring twice through the ground. He’s shown that he can be a matchup-dependent streamer moving forward, but nothing more than that.

Wilson was once again uninspiring as a quarterback, having the worst fantasy performance of the rookie QBs. The Jets offense has very little talent, and Wilson contributes almost nothing in the running game. These two factors combine to make Wilson largely irrelevant for fantasy purposes.

In his first game as a starter, Lance was decent. He certainly looked like a rookie at times and threw for under 200 yards. However, it’s encouraging to see that he had 16 carries for 89 yards on the ground. If Lance can keep up this excellence with his legs, he’ll be a startable fantasy quarterback.

Fields, who after the game said he played with a hyperextended knee, was a disappointing fantasy option this week. While the Bears did defeat the Raiders, Fields’ stat-line was bland. Despite the rushing talent that he displayed in college, Fields has seen just nine carries in the past three weeks combined, severely hindering his fantasy upside. He should be on the benches of teams in most league formats.

Jones was once again solid on the football field, but ineffective for fantasy this week. He has essentially zero rushing baseline, and the Patriots' offense isn’t good enough for Mac to rely on loads of passing touchdowns. He’s not worth rostering in most league formats due to a complete lack of upside.

Mills shocked the NFL world on Sunday, having a career day against Bill Belichick and the Patriots. He threw for over 300 yards and three touchdowns and was the QB6 on the week. Mills still likely isn’t worth picking up because of the general talent shortage in Houston, but it’s nice to see that he can be fantasy-relevant if things align.

Najee continued his streak of excellent fantasy performances, rumbling for over 100 yards and finishing as the RB11 on the week. The former Alabama superstar might be locked into the most amount of touches in the entire NFL—After 33 and 22 opportunities in weeks 3 and 4, Najee had 25 this week. He should be locked and loaded into your RB1 spot.

I’ve written in the past editions of the Rookie Report that Javonte Williams has essentially had the same fantasy performance each week, and that continued on Sunday. Williams had 11 touches, putting up efficient numbers but not seeing enough volume to be great. Continue to roster him and FLEX him if necessary.

Sermon saw just two snaps during Sunday’s game, getting just one carry. As long as Elijah Mitchell is healthy, Sermon isn’t close to being startable and is a handcuff for fantasy purposes.

Carter had a decent fantasy performance after falling into the end zone against the Falcons and led the Jets running backs in touches. If one of his fellow running backs Ty Johnson and Tevin Coleman is forced to miss time, Carter might have some FLEX appeal. For now, though, he’s a deep-bench stash.

After an RB1 finish in Week 4, Gainwell fell back down to earth this week. He had just two carries and looked like the clear number two running back behind Miles Sanders. Keep him rostered for the time being, but Gainwell likely is only startable in deep PPR leagues.

Mitchell returned from injury and assumed the “1a” role in the 49ers crowded backfield. He led the running backs in carries (but was 2nd on the team behind Lance) and looked like the best runner. However, there are probably too many options in the San Francisco running back room for any of them to be dependable starters. Mitchell should be on the bench on most teams.

Death, taxes, and long Ja’Marr Chase touchdowns. After not scoring versus Jacksonville in Week 4, Chase got back to his explosive ways, accumulating a whopping 159 receiving yards on 10 targets. He has a mind-meld with Joe Burrow and has easily proven himself as the WR1 in the offense. Continue to start him with confidence moving forward.

Waddle was a disappointment this week. Although Will Fuller and DeVante Parker both missed the game due to injury, Waddle failed to take advantage of the opportunity against the Bucs. The Dolphins offense is downright terrible with Jacoby Brissett under center, so Waddle isn’t startable in most leagues.

Smith was once again solid for fantasy, putting up 77 yards on eight targets. He likely doesn’t have the week-winning upside that fantasy managers crave, but Smith is a consistent option that can be comfortably started in most leagues, especially in PPR.

Moore was decent for fantasy this week, having 97 scrimmage yards on nine opportunities (six targets, three carries). The Cardinals’ #2 receiver behind DeAndre Hopkins remains an open competition between Moore, AJ Green, and Christian Kirk, meaning that it’s usually feast or famine for each of those players. Keep Moore on your bench until he proves himself as the clear number two in Arizona.

After seeing the first real opportunity of his career in Week 4, Toney set the fantasy world on fire versus the Cowboys this week. The 1st round pick had a whopping 189 receiving yards on 13 targets, looking like the best receiver the Giants have had since prime Odell Beckham. Along with injuries to receivers Darius Slayton and Sterling Shepard, running back Saquon Barkley was banged up and is expected to miss at least a week. This means that Toney—who saw a whopping 35.1% target share in Week 5—should continue to see a boatload of opportunity, and is FLEX-able in fantasy. 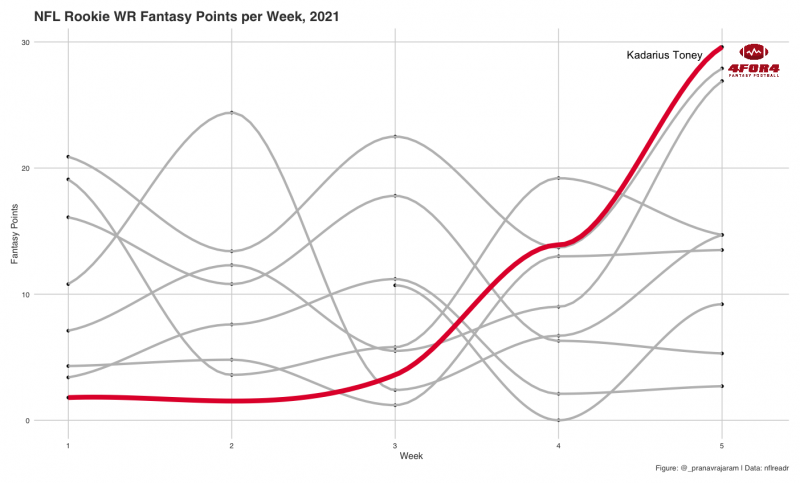 Another encouraging sign for Toney is that he has improved his fantasy output each and every week. While he obviously won't be able to keep this rate up, it's good to see that he is getting better as he gets more and more accustomed to the NFL.

Fantasy managers who held on to Kyle Pitts were finally rewarded this week, as the 4th overall pick of this year’s draft had the first breakout performance of his career. Pitts feasted on the Jets' defense, putting up 119 receiving yards and a touchdown. He’s one of the most talented players at the position and should be confidently started in fantasy given the wasteland at tight end.