The NFL has been a passing league for a number of years now, and we’ve seen it reflected in fantasy scoring for quarterbacks. This trend isn’t reserved only for the league’s most talented passers, though. In recent seasons, we’ve seen plenty of big time weekly and seasonal scores from mid-tier quarterbacks (not to mention occasional outbursts from fringe starters and second-stringers).

With more passing points coming our way than ever, often from unpredictable sources, it’s become difficult to differentiate between individual quarterbacks in fantasy. Over the course of a season, we can identify a small selection of true difference makers, but there aren’t enough of those outliers for everyone in a 12-team league. And even if you pay up for someone like Patrick Mahomes or Aaron Rodgers, the opportunity cost associated with drafting those players could negate any value you hope to get through differentiation at the quarterback position.

Even if you manage to land a stud signal-caller for a season, what do you really gain on a week-to-week basis? In the 13 fantasy-relevant weeks they both played last season (don’t at me, Week 17 truthers), Mitchell Trubisky outscored Patrick Mahomes four times, and they finished within two points of each other in a fifth week. Mahomes was the guy you wanted on your team, no doubt, but Trubisky returned his fair share of value and did so from a cheaper price.

So how often are players delivering elite weekly production? How about plain old startable production? I crunched the numbers on weekly scoring and finishes for quarterbacks between 2012 and 2018 to calculate some benchmarks for the position. Once those baselines were established, I was able to determine expected weekly finishes based on actual weekly scoring. Let’s dive in.

The process for setting the baselines was pretty simple. I started by looking at every QB1 weekly finish from 2012 to 2018 (excluding Week 17s) and calculating both the average and median finish for those top weekly scorers. Then I did the same thing for every other weekly finish, from QB2 all the way down to QB40. 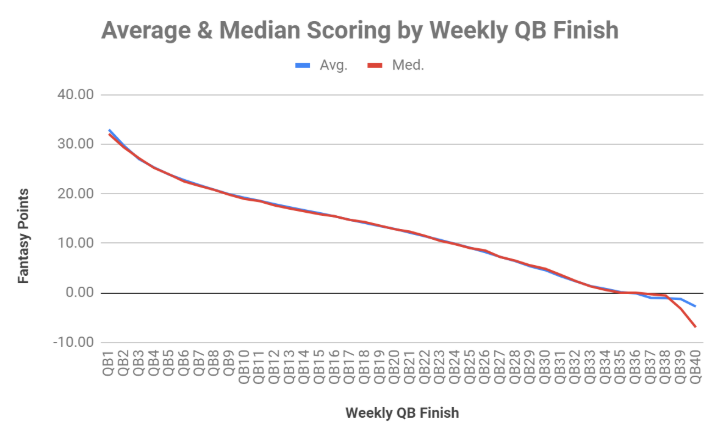 As you can see, there isn’t much of a difference between the averages and medians, so I’m going to focus only on the median data in this article. I’ll also largely ignore all data below QB30 because byes create weeks where only 26, 28, or 30 teams play, and because the data gets too noisy when looking at train wreck finishes in the QB30 to QB40 range.

The median scores graphed above for each specific weekly finish will be important in calculating expected finishes later. Before we get there, however, let’s separate the data into tiers.

As expected, there’s a big drop-off in median scoring between the top five passers each week and the next group of five, nearly seven points. The decline after that is much less steep, with only about three points separating QB6-10 from QB11-15, then a similar drop of about three points down to QB16-20. This confirms the biggest weekly differentiation comes from the high end of quarterbacks, but how often can we expect individual players to reach those heights? Here are the results for field generals who played at least eight games 2018:

Comparing ADP to the top-5 finish results, it turns out we’re not hyper-accurate when it comes to identifying the best sources of explosive weeks. Sure, of the first 12 quarterbacks drafted, only Carson Wentz, Matthew Stafford, and the injured Jimmy Garoppolo (not listed above) failed to deliver three top-5 finishes. But an additional seven passers who were drafted outside of the top-12 gave us at least three top-5 weeks. Furthermore, half of the six quarterbacks who posted five or more top-5 weeks were drafted outside the top-15 at the position. And if we look further back at quarterbacks who led the league in top-5 fantasy finishes, we see a lot of variance from year to year:

A number of prominent signal-callers rank highly in multiple years above, but it’s rare for any quarterback to repeat with five or more top-5 finishes in consecutive seasons. Variance typically knocks them back to the pack of quarterbacks with three or four top-5 finishes. So while the higher-priced options offer some amount of safety in terms of bankable blow-up weeks, lower-priced guys will often match or exceed the studs’ amount of elite production and therefore offer better value relative to draft cost.

Further complications arise from the fact that not all top-5 finishes are created equal. The median score for a QB5 finish between 2012 and 2018 was 23.93 fantasy points. But in Week 15 of last season, Trubisky finished as the QB5 with only 19.00 points. I’m cherry-picking a specific example, but this sort of thing happens all the time. Scores that are incongruous with actual finishes are the primary problem with studying weekly finish data. Arbitrary endpoints shave away context.

In an attempt to normalize the data, I used some simple linear interpolation to fill in the blanks between the median weekly finish data graphed above. Referring back to Trubisky’s outing in Week 15 of 2018, his score of 19.00 points actually falls between the baseline numbers for a QB9 finish (19.82) and a QB10 finish (18.96). By connecting the proverbial dots between those two median data points, we can interpolate Trubisky’s actual score of 19.00 fantasy points to an expected finish of QB9.95. The Bears’ young signal-caller ended up as the QB5 that week, but the median data says he should have been closer to the QB10.

I should note that for the mythical QB0 datapoint, I used the highest single-week score posted by a quarterback since 2012, which was 46.28 points by Peyton Manning in Week 1 of 2013. Believe it or not, Trubisky came closest to that mark in 2018, with 43.46 points in Week 4, good for an expected finish of QB0.20.

Who else overperformed expectations in 2018? Who underperformed them? Here are the top 32 quarterbacks from last season, ranked by average weekly finish, along with their average expected weekly finish:

First, note how every passer except Lamar Jackson had expected averages better than their actual averages. The average difference between expected and actual was -1.00. Russell Wilson posted an average weekly finish of 11.93 and an expected value of 10.77, so his difference of -1.16 was fairly typical. He wasn’t particularly unlucky compared to other quarterbacks within the context of 2018, even though his actual average fell below his expected average.

Andy Dalton and Carson Wentz, on the other hand, did not receive the weekly finishes they probably deserved based on how many points they scored. Both fell at least two spots short of their expected finishes in seven of 11 games. On top of that widespread underperformance, Dalton finished more than four spots below expectations in four individual weeks. Meanwhile, Wentz took one of the season’s toughest beats in Week 4, when his 20.72 fantasy points could only manage a QB15 finish despite an expected finish around QB8. Assuming health for Wentz and job security for Dalton, both are primed for bounce-backs in 2019.

On the other end of the spectrum, the biggest overperformers were Deshaun Watson, Mitchell Trubisky, Baker Mayfield, Dak Prescott, Jameis Winston, Derek Carr, Marcus Mariota, and Lamar Jackson. Based on these outcomes, instinct might drive you to wave the biggest and brightest red flags for Carr and Mariota, who weren’t remotely good and still managed to outkick their coverages so to speak. But because they were so disappointing, their 2019 draft costs have adjusted. Carr is QB25 in BestBall10 ADP for April, and Mariota is QB30.

Meanwhile, Trubisky was quite good in 2018, and Prescott was solid. Despite outperforming expectations, however, any regression signaled by the data above is already baked into their current ADPs (QB19 and QB20, respectively). More concerning are the actual vs. expected results for Mayfield and Winston because their stocks have risen this offseason.

While it’s fair to project growth for Mayfield after such a promising debut season, this study takes some of the luster off his rookie production. The Browns’ addition of Odell Beckham offsets some of my concern, but not enough to justify Mayfield’s top-five ADP. His price is simply too high compared to equally competent quarterbacks available later. Ditto for Watson, whose average expected finish was worse than Cam Newton and Russell Wilson, both of whom can be drafted more than a round later on average.

Similarly, if we accept that Winston got lucky last season while still finishing behind Roethlisberger, Rivers, Trubisky, Cousins, Brady, Wentz, and Prescott in both actual and expected average weekly finish, it’s difficult to justify drafting Winston ahead of that entire group now. But that’s currently the case according to ADP. Tampa Bay’s move at head coach to self-appointed “quarterback whisperer” Bruce Arians is providing the helium, but there isn’t much room to inflate the Buccaneers’ offense beyond the 625 pass attempts they posted last season (fourth-most among all teams) and their league-leading mark of 5125 passing yards.

That leaves Jackson, last year’s most egregious overperformer according to the data. As the only quarterback to post a better expected average finish than actual average finish, my skepticism was engaged, so I took a more granular survey of his week-to-week data. I discovered Jackson’s seasonal average was skewed heavily by his Week 9 performance. At that point, Joe Flacco was still the Ravens’ starter, but Jackson saw some gadget action in the game and posted 1.48 fantasy points for a QB26 finish. His expected finish for that score was much lower, QB32.84. And as I noted earlier, the data for low-end finishes can be noisy and fickle, in part because of strange cases like this with non-starters.

If we consider only Jackson’s time as a starter, from Week 11 to Week 16, he falls back to the pack with an average weekly finish of QB12.83 and an expected average of QB12.69 (a difference of -0.14). It turns out he was, in fact, the luckiest quarterback by these metrics last season, but his good fortune wasn’t as prominent as the season-long data suggests (a difference of +0.60). It’s somewhat fitting that Jackson is going back-to-back in ADP with 2018’s second-luckiest passer, Trubisky. Both players are young enough to project growth, though, so their prices at QB18 and QB19 aren’t so steep to outright avoid.

The Value of Variance

While I’ve tried to uncover some potential recency bias pitfalls with this study, what it really illustrates is the amount of variance present in fantasy football. Each season, week, game, and individual performance is subject to a plethora of contextual forces. Those forces warp outcomes relative to expectations and keep us guessing. As frustrating as that can be sometimes, I encourage you to embrace the chaos because, let’s face it, the game wouldn’t be any fun if we could easily figure everything out.

Greg Smith is an engineer and an enthusiast in the strategy and design of variance-based games. When it comes to fantasy football, he prefers the added complexity and emphasis on quarterbacks in 2QB and Superflex leagues, but Greg enjoys formats of all types. He co-founded TwoQBs in 2016 and finished 11th in FantasyPros' in-season rankings accuracy in 2017.

More from Greg Smith
Most Popular