The study, to this point, has focused on each of the broad categories typically observed in poor weather games. From an anecdotal perspective, rain doesn’t generally cause much concern. Part 1 supported the casual approach to games in this condition. Reductions of less than five percent were calculated for all metrics of interest (e.g. Vegas totals, passing volume etc.). Snow games exhibited more extreme behavior. Offensive plays significantly shift away from passing. Tight ends and running backs see more targets. The game essentially changes for these two conditions, but the wind has a different effect.

Part 1 looked at league-wide trends associated with deep passing. Here, we look at the possible reasons for the drop in deep passes. Throws of this nature have the longest time of flight where the pass can be affected. The common metric the football community points back to is the passer’s throwing velocity. With the available data, quarterback deep passing since 2009 has been parsed for both attempts and completions as compared to the league. Personnel has been included for context, but the primary interest is if a signal caller’s velocity, or lack thereof, has a noticeable effect on deep passing in high wind conditions.

Within the context of this study, filtering game data by wind produces the most varying results due to its lack of constraints. Think about it. Was last year’s blizzard game played in Tampa Bay or Buffalo? Who’s surprised a game with torrential downpour was played in Miami? Stadium locations can give rise to the worst downpour conditions that heavily swing games, but again, what about wind? It affects games everywhere. Only playing in the safe haven of a dome negates its effects. Coincidentally (or not), these locations typically house offenses we often like to target.

The remaining teams and their respective signal callers are at the mercy of the elements. Depending on the forecast, even the slightest of adjustments will need to be made in order to hit the tiny windows allotted to them on a per-throw basis. Here’s where understanding the physics behind passing a football can be of some use.

Surprisingly enough, for as much as we know (or may not know about the game) not much is known about what happens to the ball once it leaves the quarterback’s hand. A tight spiral always looks better than a wobbly floater, but the spiral isn't what fuels the pass.

Well, to a point.

Forward passes have both a linear and rotational kinetic energy component. The linear portion is obvious to us based on the depth of the pass. Here’s where metrics such as arm strength and velocity become interesting. The NFL Combine tests QB velocity during the on-field drills of the event. While only a single data point, it does point towards the maximum linear velocity a passer can put on the ball. In ideal conditions, this shouldn’t be a concern, but windy conditions change everything. Angular or rotational energy helps the football maintain its spheroid shape throughout the full trajectory. While important, the more energy converted to rotational reduces the amount of kinetic as all energy must be conserved or converted to other forms. Less kinetic energy. Less downfield travel. Shorter pass.

But, make no mistake. While the linear component ensures the ball can make the distance, the rotational component plays a critical role. A consistent shape means the air resistance force also remains consistent making it easier to predict the true path of the ball. Less rotational energy gives rise to the wobbly 'duck' passes shown in defensive highlight reels. The inconsistent shape exposes different surfaces of the football to the air resistance force changing its direction over time. In essence, a tight spiral increases the confidence interval in which a pass will hit its intended mark.

Based on the above discussion, it stands to reason that wind along the direction of the intended pass could easily be adjusted to by the quarterback. Think about it. A strong headwind would force a quarterback to increase the exit velocity on the pass to match the depth required. The opposite would be true for a wind from behind. In both scenarios, no additional surfaces of the football would be subjected to the aerodynamic forces while the ball is in flight changing its course. Crosswinds, which are much more likely, change everything.

Aerodynamic simulations allow us to gain a realistic image of what happens as wind flows through a stadium. While the actual pattern is indeterminant without instrumentation, the patterns suggest multiple vectors for the aerodynamic forces. Not just one. This makes it less likely a simple adjustment to wind can be made. It’s also supported by experimental testing. 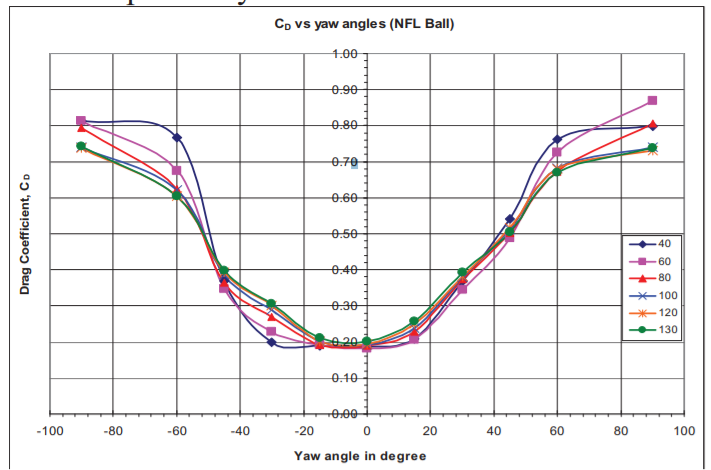 Results show that drag forces increase with yaw degree (angle) in which the wind impacts the ball. So not only will the ball fall short, it’ll fall short in a completely different location than the intended target. This phenomenon would be the most likely cause for the added conservatism in the passing game depending on the team. Most importantly, if quarterbacks are limited in their maximum capable velocity (or kinetic energy) they can place on a ball, they would be inherently limited in adjusting to high wind conditions.

Passing in the Wind

As previously mentioned, the ideal situation is where the direction of the wind is in line with the trajectory of the pass. Adapting to the weather becomes a function of the energy applied to the pass making the process more intuitive. The full system can be broken down into three main elements:

Quarterbacks don’t just generate velocity from their arm. It’s a full-body motion. Footwork, shoulder position, and grip (i.e. hand size) all contribute to the throw regardless of type. The Combine drills highlight the necessary mechanics required for a high-velocity throw. Results are not indicative of career success, but lesser values can be a concern.

The direction the stadium points combined with the direction of the wind allows us to determine how much the quarterback will have to adjust. For example, if a stadium points North-South and the wind is coming from the South, the situation is more ideal than a cross breeze from the West. 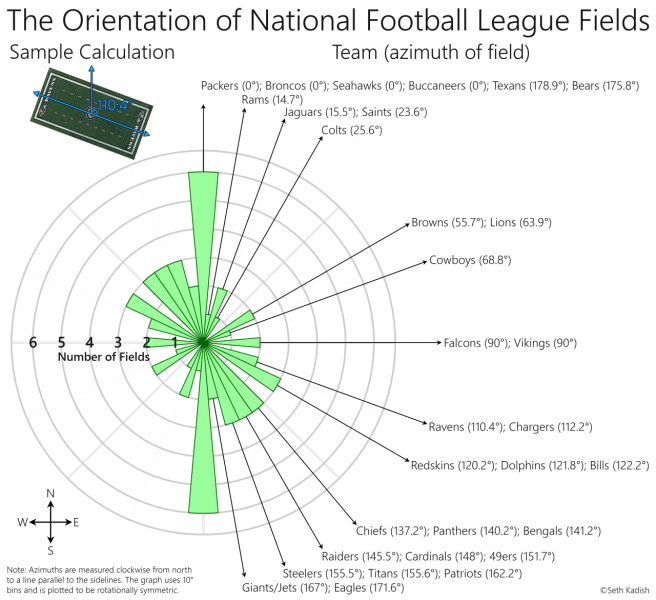 The above chart displays the directions for which all NFL stadiums are positioned. Once both the speed and direction of the wind is determined, the amount of in-game adjustment can be gauged. Remember, vortices created can shift aerodynamic forces in a myriad of directions. But, the general flow pattern can at least paint a more accurate picture of what can be expected.

Data sources for quarterbacks and their velocity measurements are here:

Full results were tabulated as shown below.

The quantitative difference in the groups (26 to 16) hampers any definitive conclusions that can be drawn. In addition, the increased prevalence of quarterbacks with a less than 54-mph velocity drafted in 2017 means there are fewer records on their throws.

The NFL draft community has generally accepted anything greater than 54 mph. Prospects below this have always been treated with an extra level of scrutiny. From the list, it’s not hard to see why this assertion isn’t more frequently challenged. But again, one data point does not make a career. Let’s look at the game by game metrics for quantitative conclusions.

A league-wide test was initially conducted to determine if there was any bias on the number of deep attempts made by quarterbacks independent of the weather. A significant correlation between the two variables would adversely affect the validity of studying completions once the weather is introduced into the dataset. In order words, fewer overall attempts by quarterbacks with lesser velocities would lend itself to fewer completions barring hyper-efficiency.

Before you ask, the sample by itself on the left is Deshaun Watson.

The results were a positive sign. The low R^2 value across the population coupled with no obvious increase in attempts for quarterbacks with a +54-mph velocity provided sufficient evidence for the analysis to proceed. The greatest number of deep attempts in a single game by a quarterback with a velocity less than 54 mph is 17 compared to 19 for all others. Only an 11.7% difference, but worth noting given the narrative surrounding both types of quarterbacks. It at least indicates there are no constraints on quarterbacks with respect to offensive play calling and deep passing plays. So now we can filter for weather.

Game conditions were pulled from Pro-Football-Reference that provides wind speed at the start of the game. Baseline conditions (0–4 mph) were first considered. However, completions were the metric of interest with an eye on context as a completion can be affected by several variables (e.g. QB touch and accuracy, receiver separation, defender). But again, if no observable difference could be identified then the final filter could be applied. 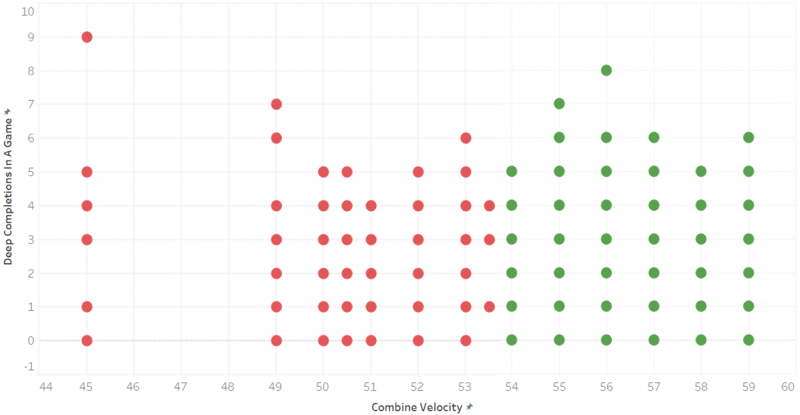 Another positive sign. Completion numbers across the dataset didn’t point towards any outlier passing efficiency skewing the data towards either group. Watson (at 45 mph) still stands out with the most deep-ball completions in a single game beating out both categories. Regardless, the amount of variation within the less than and greater than 54 mph data sets are relatively equal allowing wind filters to be applied (both 1.59).

Qualitatively, a noticeable change appears. Completions from quarterbacks that threw for 50 mph or less at the Combine become nearly non-existent. In addition, an upward trend in completed passes can be observed as the data transitions between categories. At first glance, the narrative appears to have some truth to it. 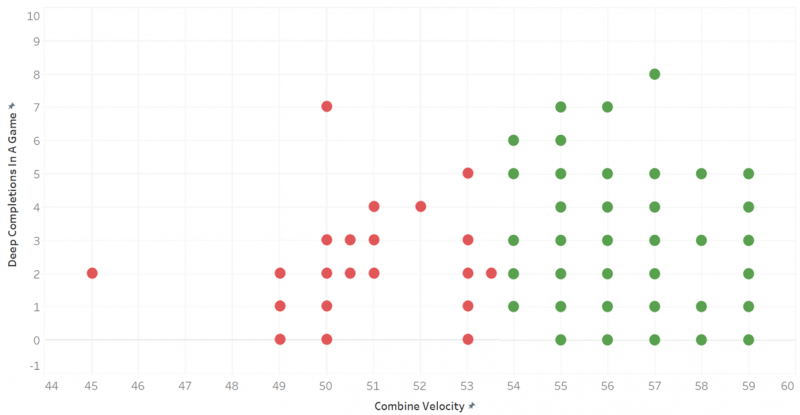 However, the number of completions doesn’t tell the full story. Quarterback efficiency on deep throws for quarterbacks with an acceptable velocity was 62.6%. The weak arm guys? 61.8%. Attempts are down across the board, but there is no evidence to suggest a connection between throwing velocity and wind speed.

Throwing velocity, in theory, should influence the football’s trajectory. The lack of initial linear energy limits increases the time of flight exposing the ball’s surface to the nearly infinite number of airflow vortices present on the field.

However, there’s more to football than just physics.

Pass completions are a combined effort between both quarterback and receiver. Quarterbacks require the strength, accuracy, and touch to get the ball there. Receivers must be able to adjust to the pass and/or separate to make that catch. Or, just make a play.

Deshaun Watson’s 45-mph velocity is the lowest of any quarterback over the nine-year dataset. Of all the quarterbacks, one would assume he’d be affected the most. His deep ball completion rate is 71.4% in high wind conditions (60.1% under baseline conditions). Having talent like DeAndre Hopkins and Will Fuller on the other end of the passes helps. That’s as positive a situation for a quarterback with that low of a velocity could find. Some of the other quarterbacks under 54 mph were not as lucky.

There’s much more to understanding throwing velocity than the single value we get from pre-draft drills. The proper approach to games with high wind speeds would be to assess the offensive personnel for their deep passing ability prior to adjusting your roster. Unless the conditions are severe, the majority of quarterbacks are unaffected creating an edge within your roster construction process.