Wide receivers should be a large part of our draft strategy in best-ball formats simply because we need more of them to win leagues. Back in my roster construction article, just one build used more running backs than receivers and had just a 2.3% win rate. But needing more doesn't mean we can acquire them at any point in the draft. Like any other position, receivers selected early give you production that's difficult to find elsewhere in the draft. However, there are ways we can identify such players who can give that fantasy output.

With receivers having different roles in their offense, it's important to understand what usage matters and how it translates to fantasy success. I looked over last year's Top 12 wide receivers, included the players from 2019, and teased out some opportunity profiles we can target for 2021. Recency bias and touchdown variance may push us towards a specific player, but having a path to significant targets and scoring opportunities is what we need for fantasy purposes.

After a wild season, there shouldn’t be any surprise as to who made the Top 12. However, if there’s any takeaway, it should come from the different types of receivers that we came to rely on over the course of the season. Prototypical alphas like Adams and Hill got their due. But slot guys (Crowder and Lamb) were mainstays of many championship rosters. The differing usage profiles allowed drafters to take their shots on receivers early, often, and throughout the draft. As a result, you could land on a Top-12 receiver at almost any point in the draft. 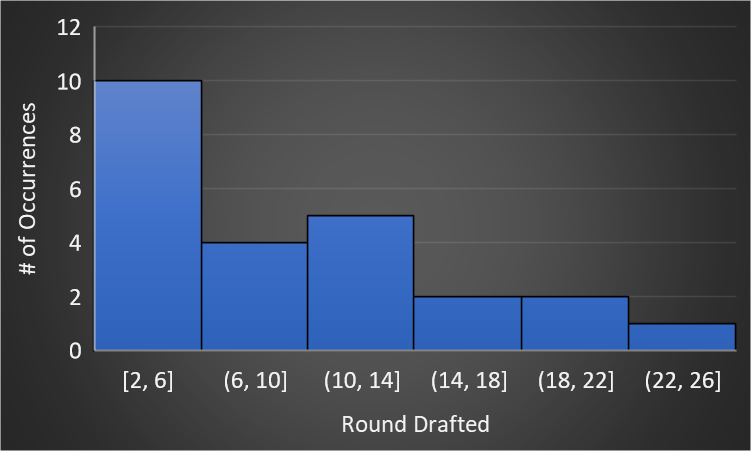 Now, don’t get me wrong. The early rounds are still the best time to draft a receiver. Over the last two years, the Top 12 has had 10 receivers come from the first six rounds. But with the rising popularity of early running back builds, it’s good to know we still have access to productive receivers without the excessive opportunity cost. We can even capitalize on a late-round dart throw. Let’s break down the usage profiles to see who we should be targeting for each phase of the draft.

The easy descriptors here are ‘alphas’ or ‘elite’. Players that wind up with the most opportunity on their team. But DeAndre Hopkins amassed more yards than Hill and he didn’t make the cut. Keenan Allen had a larger target share than Metcalf or Ridley. Overall volume can’t be the only measure of success. We’ll need to break it down a bit further.

Not all targets are valued equally. A pass caught in between the 20s isn’t as important as those from within the red zone. But, our early-round receivers need them all. So, let’s revisit our list of alphas from before.

Even in the red zone, the elite players continue to dominate. While all of them earned scoring opportunities from deeper areas of the field, they were still significantly involved once the team got within the 20-yard line. Usage like this adds to their ability to be a deep threat and emphasizes their ability to separate even when the field of play is condensed. But I needed a way to compare these values across multiple players. To simplify the data, I added the two values together to form a composite opportunity rate. With a single value, I could compare their ADP to their opportunity as a means to contrast the Top-12 players to their brethren with similar draft costs. 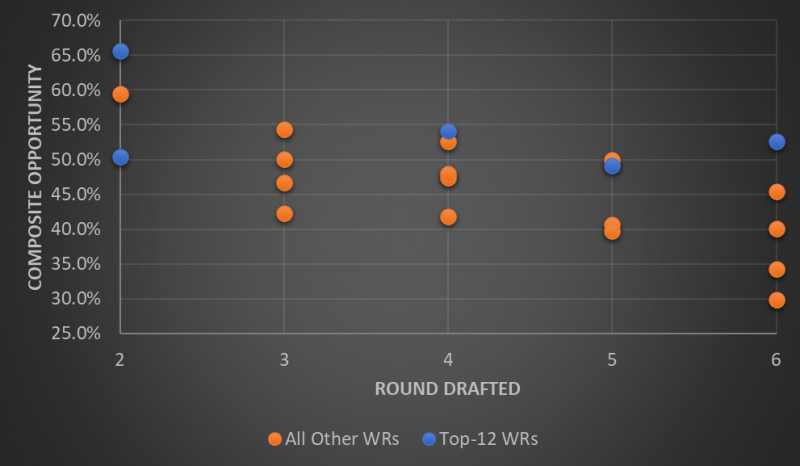 Scoring opportunities, and the receiver’s ability to turn those chances into touchdowns, were the determining factor. Early-round wide receivers have averaged a composite opportunity share of 54.5% over the last two years. In fact, the difference in the averages for the two seasons was just 0.3% indicating some level of stability despite the two-year sample. Additionally, the receivers came from above-average offenses. Six of the last 10 receivers were on offenses that were Top 10 or higher in neutral passing rate. All but Allen Robinson in 2019 were on teams that were above average in Offensive Yards Per Drive. We try and supplement volume for a player’s poor situation, but the opportunity cost is too high to mitigate that risk in the early rounds.

Of course, not every receiver with a similar opportunity will make the Top 12. Think of Allen Robinson or DeAndre Hopkins. The difference between those guys and the receivers in the Top 12 at similar ADP? Touchdowns. Or, in other words, capitalizing on their scoring opportunities. So if a receiver projects for similar opportunity in 2021, then betting on touchdown variance working in their favor would be a reasonable stance to take. Regardless, the usage has to be their first in order to make that assessment.

Early-round receivers need to hit all of the facets of fantasy football to be valuable. A combination of talent, opportunity and a positive situation must be assessed prior to drafting a wide receiver. Touchdown variance can shift results, but our process to identify the optimal receiver shouldn’t waiver from season to season. Here are a few of my targets before we look at the middle rounds of the draft.

You can tell just by looking at the names that the receiver archetype to target opens up in the middle rounds. We’re not constrained to finding true alphas here. But identifying either a primary or secondary receiver in an offense is an optimal approach. Let’s break down the Top-12 receivers over the last two seasons from an opportunity perspective using the same method that we applied to the early-round players.

Jefferson is a clear outlier given his meteoric rise and current ADP. However, the opportunity profile we’re looking for is similar across the board. A separate takeaway is a relaxed requirement to be a part of a high-powered offense. Look back at the list and you’ll see Crowder twice. Even after being attached to the Jets who were 32nd in both Offensive Yards per Drive and Points per Drive two consecutive years Crowder made it into the Top 12 on volume. But volume is key.

Every Top-12 receiver from the middle rounds over the past two seasons has accrued a minimum of 22.2% of their team’s yards. Additionally, 66.7% of the receivers saw at least 10 red-zone targets over the course of the season. However, finding receivers with these types of workloads can be subjective. As such, it can be advantageous to acquire multiple receivers during this part of the draft. 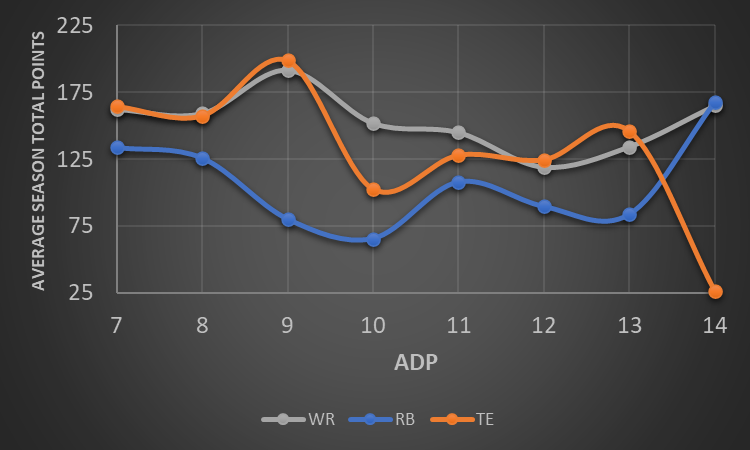 Rounds 3-6 are considered the ‘RB Dead Zone’, but the decline in expected output from running backs extends into the middle rounds. Here’s where we can capitalize on value. On average, mid-round receivers outproduced running backs by an average of 46.9 points over the course of a full season (2.9 PPG). So while other drafters continue to clamor for running backs, hammering wide receivers in this phase of the draft continues to be the optimal approach.

Corey Davis was the lone late-round receiver to make it into the Top 12. As such, we can tease out some conclusions pretty quickly. Again, the quality of offense isn’t critical. Tennessee was 13th and 12th in Offensive Yards per Drive and Points per Drive. Their offense was 30th in neutral passing rate. So again, we turn to volume as being the key factor in Davis’ ascension. To compare, we’ll look at the 2019 dart throws, too.

Their composite scores rival many of the players discussed in the middle rounds. But their role in their respective offenses is clear. Each operated as either the primary receiver or the 1B to their team’s 1A. Every receiver ended the season with a minimum target share of 19.2%. While slightly below the average alpha receiver’s share, this type of volume so late in the draft is difficult to identify. You’ll notice that two of the players are rookies which likely obscured their roles heading into the season. Regardless, walking yourself through the mental exercise of what needs to happen in order for a receiver to earn this type of volume would significantly improve your chances of landing a late-round value in 2021.

In 2020, we shied away from the incoming prospects due to the lack of an offseason. With less time to work with their new teammates and quarterbacks, their path to targets was unclear. As a result, the earliest we saw a rookie receiver come off the board was CeeDee Lamb at the 10.08. Now, the market has overcorrected.

I’m not saying I’d rather have the veteran over the rookie every time I draft. However, it’s a decision many drafters are finding themselves in this offseason. You can make a case for the choices in the latter part of the middle rounds, but the opportunity cost to select a rookie incurs additional risk given their unknown situation. If the receivers I’ve listed don’t sway you, think of the quarterbacks or tight ends with similar ADPs.

But five rookie receivers have made it into the Top 12 since 2019. We just watched Justin Jefferson break the Vikings’ rookie record and fall 73 yards short of the all-time record. But at a much lesser cost in drafts. Collectively, the 2020 rookie wide receiver class had an ADP of 17.02 (194th overall). The 2019 class was slightly worse at an overall ADP of 21.06 (246th overall). The current class sits at an overall ADP of 14.02 (158th overall). As a result of the class being valued higher, it’s not just their projected opportunity we need to consider now. We’ll also need to look at the cost to acquire them in drafts as they pose some risk to our rosters.

A way to mitigate this risk is by incorporating the receivers into team stacks. The QB-WR correlation used in DFS directly applies to the season-long bet being placed in a best-ball league. The benefits of stacking are already well-documented and taking a stance on an entire offense would position you to win your league should the rookie’s projections become reality.

Raw volume (e.g., target share) by itself can’t be the only metric for evaluating receivers. Breaking down their opportunities into their yardage and scoring opportunities presents a better way of comparing them throughout the draft.

Early-round wide receivers have averaged a composite opportunity share of 54.5% over the last two years.

Every Top-12 receiver from the middle rounds over the past two seasons has accrued a minimum of 22.2% of their team’s yards.

Late-round receivers benefit from the obscure situations during the offseason either due to being a rookie or an ancillary receiver in the offense.

Rookies have been able to instantly contribute to our fantasy squads in the past, but at a reduced cost.