Underdog: How to Handle a Slow Draft If You Get Sniped

I’m a structural-based drafter through and through. Roster construction gives me a framework for positional allocation, and I use historical trends to pinpoint player archetypes to target. Simply put, I go into drafts with a plan. But it goes sideways more often than I care to admit.

It happens. With 11 other drafters in the room, it likely will happen. Someone will draft a player well ahead of ADP. Or, you’ll set your sights on a player, forget your plan, and take someone else. My personal favorite is going on the clock after a late night and then timing out while still asleep. Regardless, I’ve collected some workarounds.

Reaching is a natural inclination to losing a player. It’s the frustration of adjusting your targets and a hint of hubris. It’s mostly hubris for me. In any case, we have time on our side, providing a chance to rework our intentions. A reach injects more volatility into your roster than you might think. So, double-check player values before making a pick instead of firing from the hip. 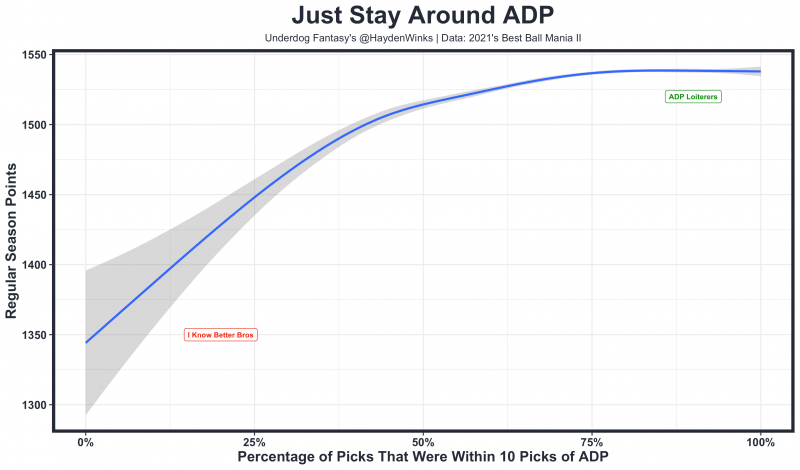 Some work from Hayden Winks emphasizes the dangers of getting too aggressive with ADP. You’re not only taking on the risk by selecting a player early, but you’re also allowing value to fall to other teams. Drafters ignoring this danger saw their regular-season point totals fall short of the ‘ADP Loiterers’. However, we can still take stances on players using ranks and projections. Slight reaches to secure a correlative pick are fine, too. Nevertheless, we should be mindful of the associated opportunity cost as timing can affect our forecasted results. 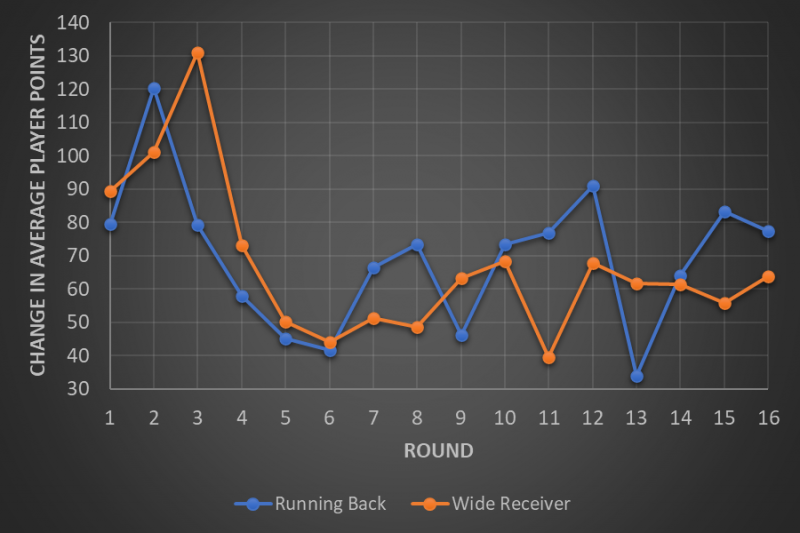 Using 4for4's Advance Rate Explorer tool, I calculated the change in average player points from the top of each round to 10 picks past ADP. Additionally, I focused on the running back and wide receiver positions to avoid sampling issues. Results show an average difference of 100.1 total points (5.9 PPG) if you reach for a player in the first three rounds. Intuitively, this jives with conventional wisdom. There are other potential top-12 or top-24 players in this range. Bypassing them adds volatility to your squad. Luckily, the impact wanes as the rounds progress.

I like to look ahead and gauge which players will be available at my pick. I’ll even start queuing up players for my subsequent selections based on the guy I’ve already mentally drafted. My idea is foolproof, and my roster will look immaculate afterward. Then, this happens.

Positional runs are the biggest trigger for ADP reaches. In fast drafts, it’s comedic and terrifying to watch your queue list dwindle as the board updates. The slower format only increases the anxiety levels as you have to wait longer for the same inevitable outcome. There’s a pull to get the next-best guy as a tier begins to dry up. Except, there’s more than one set of tiers to monitor.

Switching to another position avoids the potential of reaching, and we’ve already walked through its importance. So, risk avoidance is one benefit. Capturing value is another. In the above example, the player selected after the receiver run was J.K. Dobbins. He slid 2-3 picks according to his ADP. It’s not a league-winning selection by any means. However, we can qualitatively measure the value of the pick when DeVonta Smith went at 59th overall (ADP: 69.6).

Look for Backups – Lean into Uncertainty

At this point in the offseason, we’re drafting with the least amount of information. We can logically project depth charts for rookies and veterans based on beat-writer reports and draft capital. But those can change in an instant. Suspensions are likely still on the way, too. A player’s ADP doesn’t always reflect the chance of a potential role change or missed games. And yet, most go along with the market.

If you lose one of your draft targets, look for their backup. Looking for backups comes with similar benefits to switching positions. You’re likely to consider another skill group at your current pick to help avoid reaching. Plus, the ADP associated with the backup can generate value with their on-field production. I found some examples scrolling through 4for4's Underdog ADP tool.

We’ll likely see each of these backups get work during the season. Total volume is the only question. However, the uncertainty in each situation is worth a minimum six-round discount. Over half of these backfields reside on teams with a top-12 quarterback. Taking a cheap piece of a productive offense can also pay dividends if not for the ambiguity alone.

Stacking has nearly become a requirement for every roster. I tend to queue up every player associated with my quarterback after adding them to my roster. According to TJ Hernandez, only one of the finals teams in the last two Best Ball Mania tournaments didn’t have at least two players from the same team on their roster. Attempting to correlate my roster becomes my top priority if I lose a player.

However, the primary stacks are challenging to complete without getting aggressive at ADP in some cases. Plus, it’s likely drafters have duplicated those player combinations. We need uniqueness with reduced risk. Again, the later rounds offer some assistance. To help, I found one viable late-round option per team.

Your stack’s matchup in Week 17 (or throughout the playoffs in general) also becomes a consideration. Additionally, it increases the number of options you’ll have for correlation. Regardless, the guidelines remain the same regarding ADP and handling positional tiers as the draft unfolds.