Roster construction isn’t a primary consideration heading into drafts. We see player names, or our draft slot. A ‘3-7-8-4-3-3’ build typically isn’t on our mind when making our first pick. But it’s a guiding principle to building optimal teams worth reviewing every year. It’s not that there are only 12 ways to construct a winning squad. However, the builds and the strategies applied during each phase can be lessons learned as we head into the lobbies. I’ll start with winning trends from 2021 and use the last three years to set up strategies to apply for drafts this offseason.

For me, it’s hard to take away anything from a single season. Sure, drafting just three quarterbacks was optimal, or taking three or four tight-ends was the best path. But selecting the right one or two players could have swayed your entire season. However, I doubt it’d happen three years in a row.

No, I didn’t just copy and paste the same numbers three times. The top-ranked roster construction has been the same since 2019. And the runner-up isn’t much different.

We look for certainty in players, and ambiguous situations cause doubt and drive down the market value. But we have a sense of stability for roster construction at the top. Plus, it’s another way to measure opportunity cost when deciding between two players. We can see how win rate rises or falls as we go past the roster limits for each position. We can also see how viable experimental builds are in the aggregate.

I’ve seen the notion of pushing past the traditional three-quarterback build in this new NFL era. I see its merits. We have the extra week, short-term injured reserve gives teams more flexibility, and the expanded playoffs are an incentive to keep competing through Week 17. But we’re cycling through more passers now than in previous seasons. As a result, we get duds at the QB4 slot. Plus, a player’s seasonal projection isn’t the only metric to consider.

Draft cost is critical to the entire draft process. Answering not just ‘who’ you pick but ‘when’ you select them informs your later decisions. Let’s start in the early rounds to find the winning trends and how to apply them in 2022.

From the 2021 data alone, a balanced approach was optimal. Ten of the 12 builds allocated picks to at least three of the four positions typically considered by the sixth round. Just two strategies featured more than half of the selections assigned to one position. It makes methods like ‘ZeroRB’ or ‘HeroRB’ harder to justify, but how often drafters employ the strategy is key here. Regardless, there’s another trend at play. 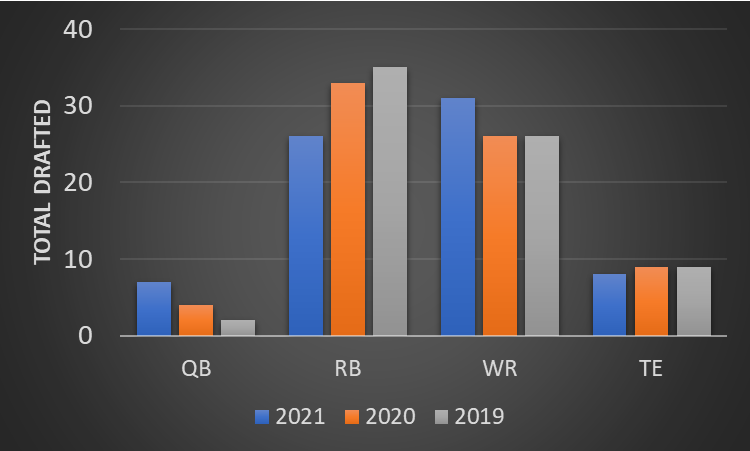 I only used the top 12 early-round builds since 2019, but the trend extends to the top 25. We’re prioritizing passing games now more than ever. The number of quarterbacks in the early-round Top 12 has steadily risen over the last three years. Wide receivers bumped up last year, too. As a result, running backs have taken a step back. But not all of them.

I collected the top-3 most common running backs in roster rate from the early rounds, and you can discern a clear archetype from the list. When to draft at least one also seems clear. However, the main takeaway is we have an idea of how the market will behave, which we can leverage.

Players and acquiring talent are the main focus in the early rounds, and pockets of opportunity can open up. If your league mates devalue running backs, one is likely to slip. Runs at wide receiver can lead to a quarterback dropping past their ADP. Regardless, planning out your mid-round strategy or applying a balanced approach will set you up for your picks at the start of the seventh round.

We can use the first six rounds to devise a plan for our roster. We implement it in the middle rounds. Every position becomes a consideration through the 15th round. If you bypassed the early-round quarterbacks, at least two should be on your radar. Expectations for running back may drop off, but ambiguous backfields are worth targeting. In any case, complementing our roster is the top priority. But it’s everyone else’s priority, too.

The fallout from a drop in early running backs is a spike in the middle rounds. Their roster rate in the ninth and 10th has increased since 2019. Wide receivers are up nearly across the board. So while we’re drafting more, the answer isn’t necessarily to take whoever happens to be available. We need to isolate what profiles to identify.

As a baseline, I isolated the Top 3 in roster rate from the last three seasons. Last season was a clear shift for running backs. Traditional RB2s were still viable, but a path to a top-12 workload on a productive offense was the differentiator. Wide receivers require a bit more projection year over year. Due to their team or projected role within their offense, their ambiguity causes their draft cost to fall. However, their ceiling is unmatched, which should help them stand out from their peers at similar value. But it’s a bit different for the onesie positions.

We still have top-12 options at the position, but the archetype changes. Pocket passers become the focal point of the middle rounds. Our tight-end options have weekly upside, but lack sustained success across a full season. Josh Allen, Lamar Jackson, and Rob Gronkowski are somewhat outliers, but the rest bolster my point. Plus, they give some insight into how to view the middle rounds.

We typically try to find players that will top the end-of-season ranks. However, our chances diminish with each round. Instead of focusing on the whole season, mid-round players are gap fillers. Their scores over short stretches of the season will cover our earlier picks with a chance at becoming our starters. Our targets should be players with paths to more work, but their stand-alone value is critical.

The late rounds start with a heavy dose of special teams, with kickers leading the way. Drafters will gravitate towards the popular defensive units, but they’ve been hard to hit over the last few years.

Clearly, we’re not experts at evaluating team defenses. There’s less risk in taking one as opposed to an earlier round, but looking at other positions is still an option. While even harder to project, we’ve hit on solid contributors late in the draft.

The wide receivers were wagers on talent or situation. In hindsight, all are easy to see but unproductive in prior years or rookies. Every running back was a handcuff heading into the season. Only the tight-ends had middling roles in their offenses the year prior. But, given their offense, they were an ancillary option in the passing game.