Drafting quarterbacks has become an arms race over the last couple of seasons. Top options come with significant opportunity costs. Meanwhile, the pool of late-round selections has nearly dried up. Securing just one legitimate passer is a roster balancing act, and three are typically optimal. Using win rate data from last year from FantasyMojo, I’ll walk through how much has changed in the quarterback landscape and how we can adjust our strategy for 2022.

If you looked at the list and it made sense at first glance, look at it again. I can explain.

Using roster win rate can help paint the big picture but in broad strokes. We’d expect players like Justin Herbert and Tom Brady to be the driving forces for many drafted teams, but a single passer’s total score isn’t the only factor to consider since we roster multiple. Timing, when the spike weeks come, is also at play.

FFPC leagues last until Week 17. Even though there isn’t an official playoff window, those final few weeks are the most important. Think about your team by Week 14. Injuries, changes in situation, and complete whiffs on projections riddle every roster. Any production to hold an early-season lead is welcome. A late-season spike can seal a victory.

We look for passers that will carry us the entire season, but each week matters. Jared Goff hit QB8 in Week 15, and Zach Wilson was QB4 the following week. Josh Allen is the only quarterback the duo didn’t outscore on the list over those two weeks. Mac Jones averaged fewer points per game than Taylor Heinicke throughout the season and still made the list. Why? Jones’s best week came in Week 17 (QB6 against Jacksonville).

So, the late-round darts still have value. But, you’ll still need the early and mid-round options to do the heavy lifting. Let’s break down each phase, see how drafters fared last year, and apply our knowledge to this season.

Drafting quarterbacks early is an annual debate. The perception of 'set it and forget it' brings people back every year. And the results emphasize why it’s a popular approach.

Early-round passers dominated the weekly rankings with 11 finishes at first overall. Their peaks were the best in the league, and their valleys were Top 1 throughout 30.9% of the season. Six players accounted for nearly a third of the QB1 discussion. It’s a statement that sounds impactful on its own. However, they didn’t impact our rosters in the same way.

The market shift for quarterbacks has pushed more into the early rounds without a similar bump in win rate. Since 2019, We’ve tripled the number of passers taken before the seventh round but only double the amount have made it into the Top 12. It’s a more significant hit when you consider the players at other positions given up to draft the quarterback. You’ll need more than just one pick to make quarterback a strength on your team.

I used our roster construction tool to see if waiting on a second quarterback was valuable. The data is from Underdog, but I used the sixth round as an early cutoff. As shown, teams were more likely to wait until the rounds 10 or 11 to take another passer. However, squads that double-dipped in Rounds 7 through 9 averaged more points. In other words, make your strength stronger. Look to the start of the middle rounds for another passer, as you’ll need more than just one option to buoy your team throughout the year.

My favorite strategy has been to wait until the middle rounds to draft my first quarterback. I’d have high-end options at each skill position by this point and would then have a shot at a top-6 quarterback. It was a solid approach, but not a unique one. 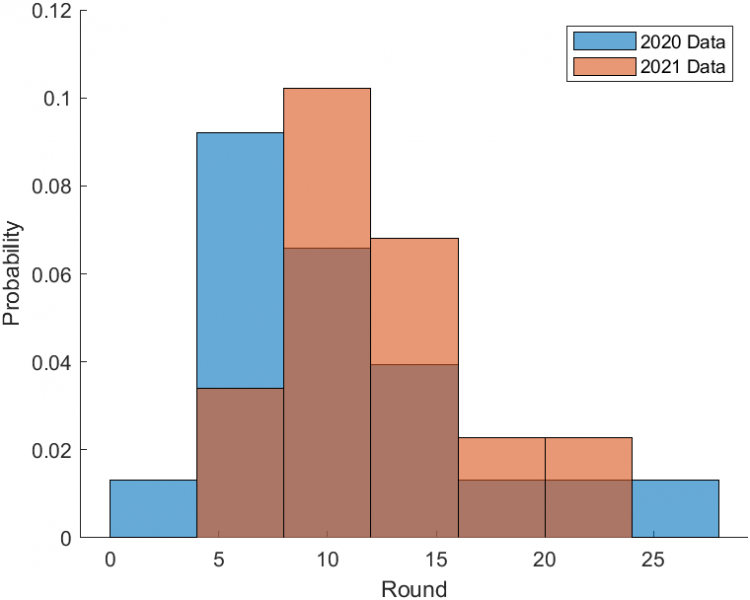 The influx of young, preeminent signal-callers and the continued presence of elite veterans give us a talent collision in the middle rounds. Plus, with a greater emphasis on quarterback rushing, archetype becomes an important consideration. As a result, we’re cycling through quarterbacks faster than ever before.

Our thirst for quarterbacks has gone up each year. However, we’ve gone overboard in trying to secure fantasy production at the position. 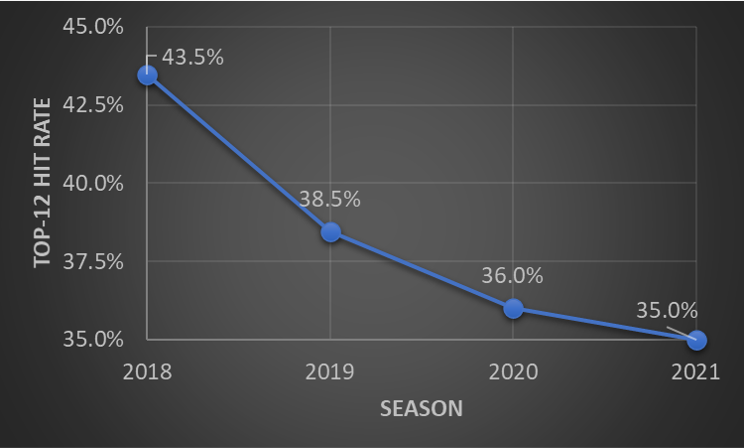 On average, we’ve drafted 23.5 quarterbacks in the middle rounds over the last four seasons. Typically, about 10 make it into the roster win rate Top 12. But not last year, with just seven making it onto the list. What changed? To find out, I dissected how the middle round quarterbacks ranked weekly.

Nearly three-quarters of the passers drafted in the middle rounds ranked at or higher than sixth. And it wasn’t a fluke for most. The average appearance was 2.6 times across the sample. So scores for top-6 quarterbacks must have been down, lessening the advantage of outscoring their peers. 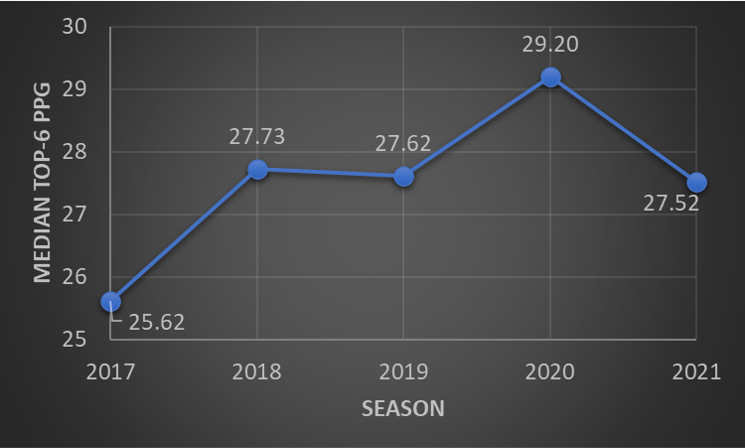 Nope. Between empty stadiums and a drop in offensive penalties, 2020 is considered an outlier. As a result, scoring for top-6 passers has been relatively stable for three of the last four years. It’s not that we’re drafting too many quarterbacks in the middle rounds. We’re not taking enough.

The talent pool with top-6 upside trails off as we get further into the middle rounds. Kirk Cousins (ADP: 12.03) and Sam Darnold (14.10) were favorites from last year, with Darnold being an early-season surprise. If your first quarterback comes in the middle rounds, be prepared to re-up on the position within your next one to two picks to capture the most stability throughout the regular season.

I’ve viewed late-round quarterbacks as dart throws. They’re just guys that could cover a bye week with 10-15 points. Afterward, I revert to my early or mid-round selections. But my thoughts on spike week timing and how our third (or fourth) signal-caller can play a role worth exploring. My conclusions fit this season, but let’s go farther back.

Every late-round quarterback on the roster win rate Top 12 list outscored half of their peers during the final three weeks of the best-ball season. There were no exceptions. It makes drafting before the NFL schedule release more nebulous, but we have an archetype to target.

Four of the six passers were rookies. This year’s class doesn’t have the same appeal, but we should expect to see at least one freshman make it on the field towards the end of the season. Regardless, our focus should be on quarterbacks with not just top-12 potential but the path to do so in the final weeks of the season.