Stacking in best-ball formats has become one of the popular strategies to enter the fantasy football community this offseason. Its core tenets require some nuance but the method itself is straightforward. Pick a team and get as many players as possible from that team. An oversimplification, but it starts the conversation as to why integrating stacks into your rosters can be beneficial.

To help, I took a step back to analyze the strategy. Stacking comes in a variety of forms and I broke down the common approaches. Additionally, I dove into the data. Subjectively, rosters with multiple stacks are aesthetically pleasing but there should be a way to analytically support stacking. Finally, I looked at last year’s stacks for common profiles, identified my favorite stacks for 2021, and provided some guidelines on implementation.

Adding correlation to your lineups in other formats (like DFS) has been around for a few years. Intuitively, the idea makes sense. If we expect a quarterback to perform well, then his pass-catchers should benefit as a result. But we’re looking at a full season in best ball. So, with multiple games to consider, stacking methods become more diverse. Let’s look at a couple.

We’ve all seen the methods used as we get deeper into draft season, but let’s dive into why they’re viable. I used the phrase ‘adding correlation’ earlier. It sounds technical, but correlation is simply a connection between two things. It’s a way to quantify logical conclusions. From correlating elite receivers to the quarterbacks to connecting running backs to good defenses, we build our rosters based on those conclusions. ‘If X quarterback does well, then Y player will benefit.’ And the data generally supports this idea. However, it depends on the position.

To measure correlation, I compared PPR point totals from Weeks 1 to 16 over the last two seasons between quarterbacks and the other skill positions. For wide receivers specifically, I separated wide receivers by target share:

Additionally, I looked at tight-ends with a target share greater than 15.0%. The cutoffs are somewhat arbitrary, but it helps establish a baseline. Regardless, we can set expectations for the results. Wide receivers have earned 58.9% of the league’s targets over the last two years. As a result, we should expect to see a significant correlation between quarterbacks and receivers. 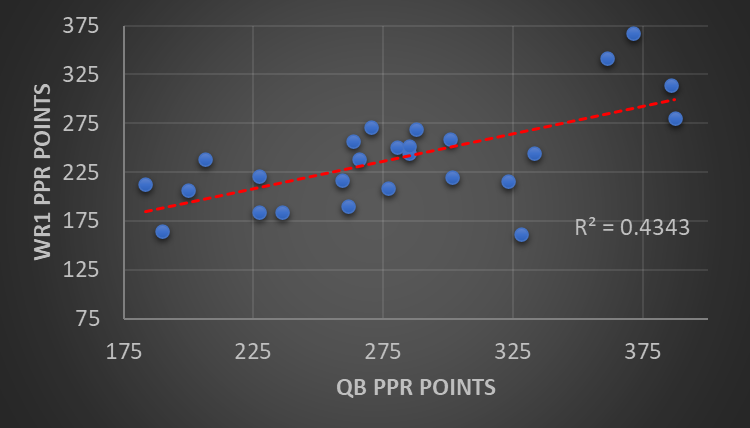 Our prior is confirmed. A WR1’s production is significantly correlated to his quarterback. At a minimum, such a strong relationship points to the viability of single stacks across a full season. Let’s look at the remaining positions.

A couple of key takeaways here. ‘Skinny stacks’ hold the strongest correlation with WR1’s dominating the study. However, ‘double stacks’ with two wide receivers aren’t as strong. The connection between a quarterback and his WR2 is nearly three times weaker. But look at the value for tight-ends. Their stronger relationship to quarterbacks indicates that a ‘double stack’ would be more viable if a WR1 and tight-end are used. Running backs are a different story. 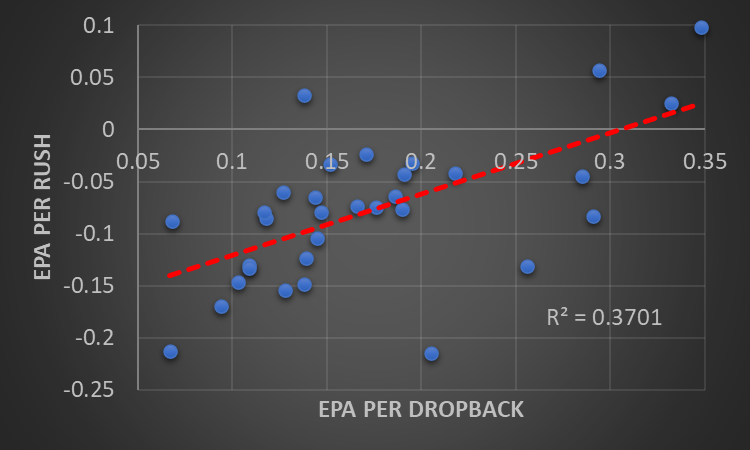 The non-existent correlation between quarterbacks and running backs wasn’t a surprise. The two positions accumulate points in different ways. But their efficiencies are connected. As such, QB-RB stacks can be used in specific situations. Now, let’s dive into what worked in 2020.

Single stacks are simple to parse through. Three of the six wide receiver stacks were on teams in the Top 10 in neutral passing rate. Four of the six were on top-10 offenses in Offensive Yards per Drive. All but Arizona and Tennessee were Top 10 in terms of red-zone passing. Just Green Bay was below the league average in neutral pace. From here, we have an archetype of offenses we want to target for our receiver stacks.

It’s slightly different for tight-ends. You’d think raw targets would be enough, but Gronkowski earned just a 13.5% share. But Tom Brady still targeted the tight-end position at the 12th-highest rate in the league. Tennessee and Las Vegas were both in the Top 5. The high-end usage of the position leads to red-zone targets which adds to the player’s leverage on the field. As a result, look to teams that use their tight-ends at or above the league’s average.

Running-back stacks align with the analysis I showed before. Despite just Cook having the elite target share, all three were tied to offenses in the Top 12 in EPA per play. A simplistic take, but our focus should be on running backs who will see significant volume in efficient offenses. But again, we’re projecting out over a full season which gives the edge to the other pass-catchers in most single stacks. Double stacks are slightly harder to break down.

Double stacks with either a receiver or running back were the most common across winning teams last season. All were either a part of highly efficient offenses and/or predicated on the passing game. Additionally, their individual win rates align with stacks. Only Cooks, Hardman, and Conner weren’t in the Top 12 in win percentage for their respective positions. The process for building the stacks may have been correct, but the data highlights an issue with analyzing stacks by win percentage.

A ‘Carr-Ruggs-Waller’ stack was fueled by Waller being first in tight-end target share and second in PPG at the position. He’d also be the reason for Jalen Richard being in the table. McDonald only earned 14 targets on the season, but Ben’s late ADP and volume buoyed the stack. Individual players can skew our view of a potential correlation. It’s why building a profile of teams to target is critical to the method. Without it, the likelihood of connecting players on below-average teams increases which will negatively impact your roster. Regardless, there are some clear favorites for the upcoming season.