Wide receiver is a challenging position to evaluate. As passing games evolve, so does on-field deployment for receivers. Plus, each player wins differently. The nuance is fascinating. But, again, challenging when building a best-ball roster.

We have so many archetypes of receivers to draft nowadays. From X receivers to deep-ball mavens, their on-field utility translates to fantasy points. However, their value rises and falls throughout each part of the draft. Luckily, our friends at FantasyMojo have some data to help sort through it. Starting with what worked last year, I’ll dig into each phase for what to look for in 2022.

The names in the Top 12 underscore my sentiment from the intro. They’re all so different yet play the position. I see slot receivers and split-ends. We’ve got rookies and first-team All-Pro veterans. It’d be a stretch to sort them categorically as we’re touching the extremes of every spectrum worth considering. However, their draft cost does give us some insight. 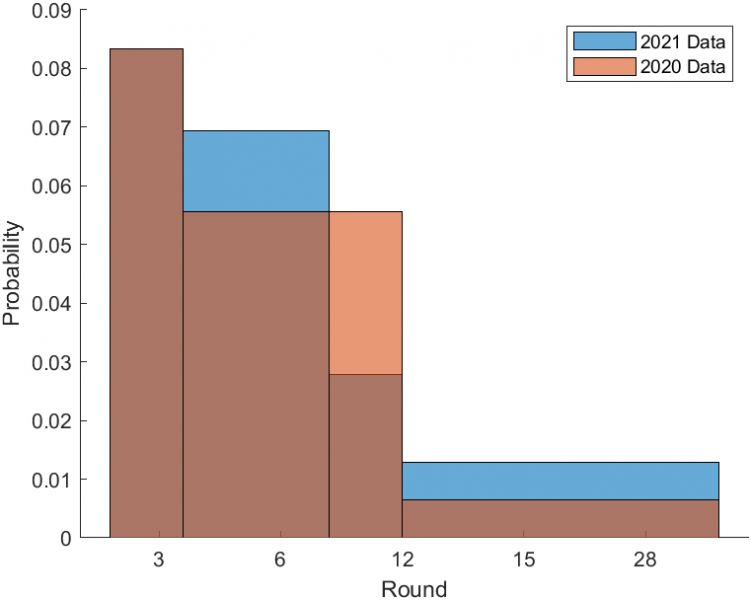 I used just the top-12 wide receivers in roster win rate and found the same behavior over the last two seasons. As the draft progresses, win rates decline. Intuitively, this makes sense. We’re at the bottom of team depth charts by the 15th round. Our expectations for a WR4 aren’t the same as a WR1. However, we drafted 164 receivers in 2020 and 2021. The average was 125 the two seasons prior. So, I looked at the top-36 receivers to confirm the trend with more in the rotation. 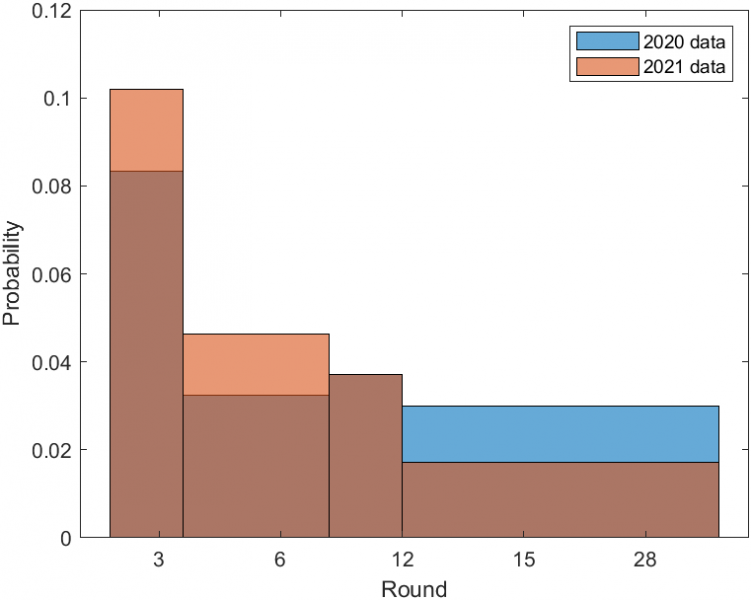 There’s a heavier bias towards the early rounds, but still a similar result. This conclusion would lead me to draft wide receivers with my first few picks. However, we’ve had an influx of talent shaking up the middle and late rounds.

Typically, uncertainty suppresses a rookie’s average draft position (ADP). We can string together narratives for how good they’ll be all offseason. However, we don’t know. And their early-season target shares highlight the learning curve most go through transitioning to the NFL. Regardless, we start three to four receivers each week. We’ll need depth at the position. So while the early-rounders may be our foundation, the later phases can secure a late-season push. But let’s start with those first six rounds and see what profiles are worth targeting.

Like I said before, the names give us a starting point. The majority of them are more expensive this year, but we can still find similar profiles. Let’s start with their on-field deployment.

The early-round players in the Top 12 were ‘The Engine’ ™ of their team’s passing game. An overall target share of 24.0% or above isn’t enough. This group alone averaged over a quarter of the red-zone opportunities. Also, look at the average depth of target (aDOT).

Primary receivers typically fall into the 9-12 aDOT range due to their route diversification. Of course, there are outliers. But a large enough sample gives us a solid profile to bet on each year. I used the early-round receivers from the Top 12 since 2018 (22 players) and distilled their usage into a single analytical snapshot.

I’m not saying guys like Mike Evans can’t make the Top 12. It’s just less likely. It’s effectively swapping weekly sustainability for a higher ceiling. We can see it in their fantasy ranks over a single season.

Eleven of the 24 overall-WR1 finishes belong to receivers with an aDOT of 13.0 or higher. But notice they’re one-hit wonders. Tyreek Hill is the only deep threat to repeat, but his aDOT dropped from 15.5 in 2018 to 13.4 when it happened again. At the same time, Hill’s red-zone target share jumped from 16.0% to 23.5%. It might seem coincidental, but it should make sense.

We expect our early-round picks to get volume. No surprise there. But the actual difference makers are the players with teams constantly trying to find new ways to get them the ball. Or, at least the receivers with the capability of being more than they were the prior season. Our targets should be not just WR1s for our fantasy teams but certified alphas on their own.

Yes, Deebo Samuel’s on this list. No, I don’t know how to reverse engineer his profile and find ‘this year’s Deebo Samuel.’ My DMs are open if you know how to find the next player to create a new position. But I can at least use his receiving metrics to set the stage for the middle rounds. 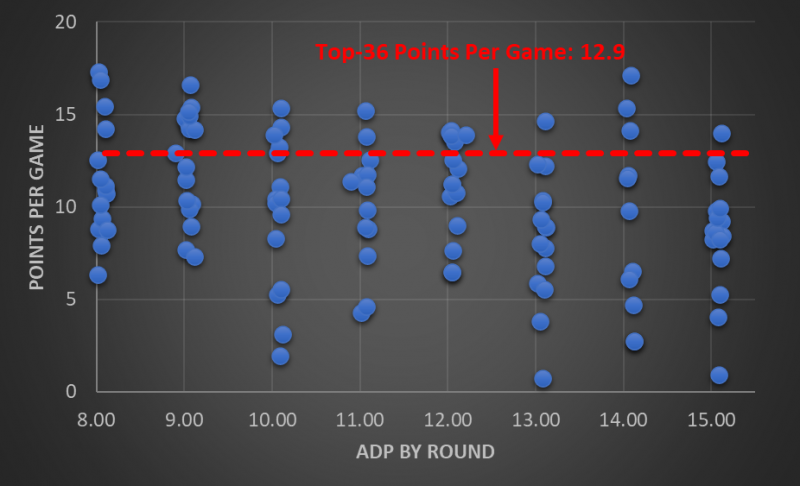 It may feel like the receiver runs leave you with less-appealing options, but don’t get too anxious. Since 2018, players with top-36 upside have been available in every middle round. Top-36 may not sound like much, but 62 receivers are gone by the end of the fifteenth round. If there’s potential for a player to jump 30 spots in value, sign me up. In either case, we need to know what to target.

Again, Samuel skews the analysis, but the other names paint a better picture. We’re looking for 1Bs, WR2s, or a team’s second passing option. And, even focusing on 2021, it’s not a minor role.

The median target share for mid-round top-12 receivers in roster win rate was 24.0%. Their aDOT was 12.0. Most of these players could moonlight as their team’s primary target, but their utility was typically uncertain. Part of it was their age. 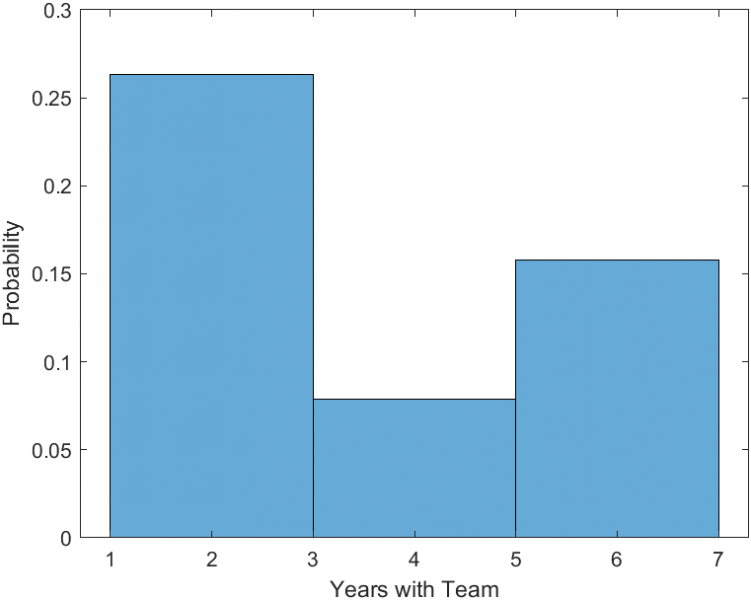 Earlier, I talked about rookie development and how the market values their first year. Unless they’re top-12 producers from the jump, we’re hesitant to boost their ADP. So, they fall into the middle rounds with everyone else. Receivers with three seasons or fewer under their belts accounted for 68.4% of the mid-round top-12 players. And, as I see three Jets’ pass-catchers on the list, their team situation wasn’t a significant factor.

I prioritize kickers and defenses once we get into the late rounds. I’ve already drafted about six receivers by this time and can take a chance or two. But I have no expectations. 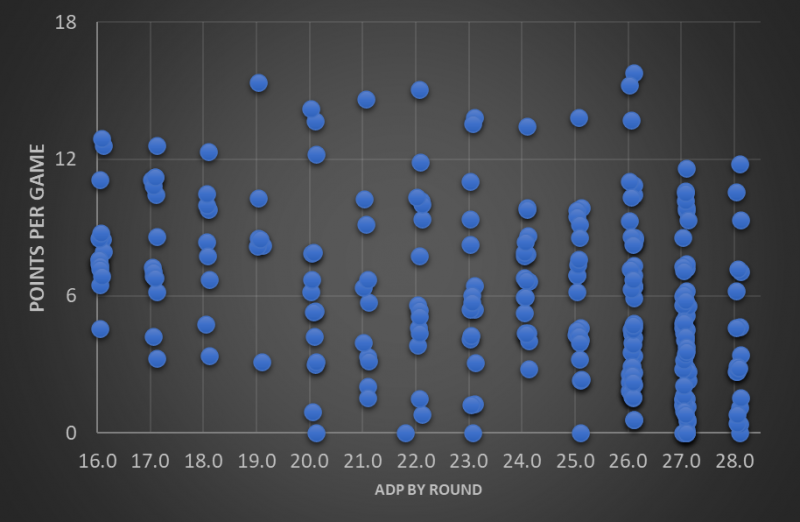 We’re mining the bottom of team depth charts, which shows in the boxscores. Since 2018, 52.0% of the players drafted have averaged 6.0 or fewer points per game. However, the last four years have given us some idea of what to look for in the late rounds.

Let’s focus on the weekly ranks first. Late-round receivers in the roster win rate Top 12 averaged four WR1 finishes and had at least one week as a top-6 receiver. Of course, we’d like to see our guys finish at the top spot, but we’ve already outkicked our draft cost by this point. At a minimum, they’ve jumped 50 receivers in value. And luckily, there are some commonalities to extract.

First, consider the volume required to result in this level of production. It’s odd to find players with a median target share of 20.3% this late in the draft. But look at the names. They were all considered third or fourth options on their team to start the season. The Lions listed Amon-Ra St. Brown behind Quintez Cephus. We hyped up A.J. Green and Rondale Moore making Christian Kirk the cheapest of the trio. At some point, our pessimism creates value. And, as always, we should consider paths to more volume regardless of what we think we know at the time.

Player Profiles
How Valuable is Damien Harris for Fantasy Football in 2022?
by Pranav Rajaram · Jun 24, 2022