If you’re like me, you’ve been deep in the best ball streets throughout the summer. I’m at the point where quarterback ADP is more of a feeling than a number. Those drafts inform my opinion of players, but managed leagues require more focused analysis. Each week provides new information, and studying the schedule for advantageous matchups can give us a much-needed edge.

Our Team Level SOS tool sets the stage. From here, we get a granular picture of each team’s season and their opponent’s schedule-adjusted fantasy points allowed. But, keep in mind those values come from last season. Injuries or personnel changes have changed our outlook for quite a few squads. Regardless, it’s a safe starting point. So, let’s determine a suitable quarterback pool and see who benefits from their schedule.

Let’s be honest here. You’re not drafting the early-round quarterbacks because of their schedule. Coincidentally, the first month of the season looks easy for Jalen Hurts (at DET, vs. MIN, at WAS, and vs. JAX), but it’s a bonus. Like the other top options, Hurts can produce independent of his matchup. As such, our search for any beneficiaries should focus on the middle and late rounds. A quick method I came up with last season helps us narrow it down. 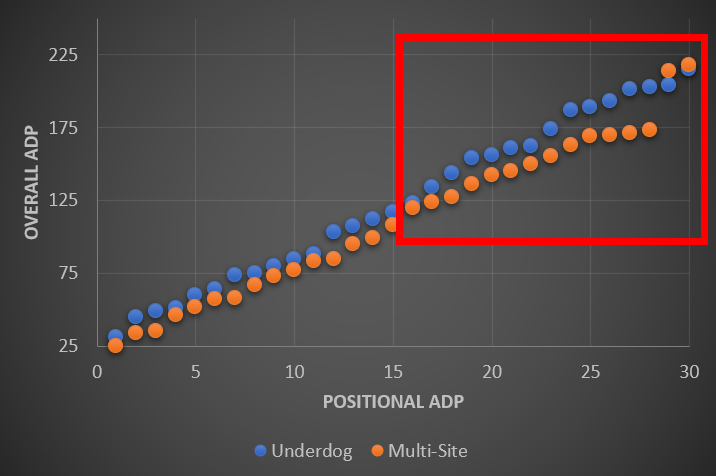 Best ball and managed leagues have similar draft strategies. But the thought process deviates when considering late-round options. As a result, we can see where the market starts to value quarterbacks differently between the two formats. It’s not exact, but the results jibe with general intent.

Seeing Drew Lock or Desmond Ridder on any list typically doesn’t inspire much confidence. But, we shouldn’t look at the season in its totality. Fantasy managers can use quarterbacks on this list in certain season pockets or for a single game. The matchup(s) determine the need. So, let’s start in the early part of the season, where we have the most information.

It’ll seem anti-climatic to start your draft with Saquon Barkley and CeeDee Lamb, only to wind up with someone like Ryan Tannehill as your Week 1 quarterback. But at least the rest of your roster will be stacked. The hope is whichever passer you draft has a top-12 ranking in their weekly range of outcomes. Luckily, I’ve found a few which fit the bill.

From a real-football standpoint, it’s hard to see how Matt Ryan fails this season. When healthy, the Colts' offensive line has been a top-10 unit in adjusted sack rate. Jonathan Taylor was the most explosive back in the league while churning out the most first-down runs in 2021. So, the offense should be more efficient. But we need pass catchers to fuel Ryan’s fantasy production. And he has two of the best.