The fantasy football season is nearly here. Finally. But before the first kickoff, we all have to go through our drafts. We all have to build our squads. Draft strategies will be somewhat varied this season with rookies and an additional week of games. Regardless, the quarterback position still sits atop the list of valuable spots in fantasy football.

And, more importantly, we should have an idea of how to draft and manage the position.

We say this every year, but this season feels different. We’ve already seen a significant shift in how we draft quarterbacks. It’s put the onus on most folks to grab their favorite passer early. But finding pockets of value in the late rounds is still possible. Streaming is still viable. Using Strength of Schedule and our own average fantasy points allowed (aFPA), I’ve found eight quarterbacks to target in drafts with options to pivot to throughout the fantasy season.

The term “late-round” for quarterbacks doesn’t mean the same as it did in years past. The QB16 was going in the 11th round in 2018. The same positional value now requires an eighth-round pick. But despite the overall ADP, we know the drop-off in expected output can be a detriment. So finding a breakpoint in opportunity cost is critical.

To separate the quarterbacks, I compared best-ball ADP to current positional values in redraft mocks. The formats are different, but risk tolerances and seasonal outlooks drive some similarities in how we draft. Any deviation would mark our starting point for “late-round” quarterbacks. 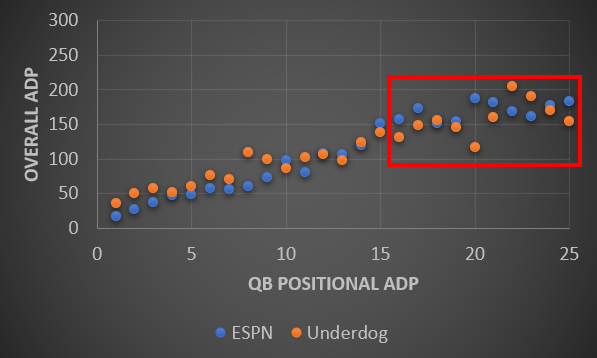 It’s not an exact science, but we start to see more deviations at QB16. Intuitively, the results make sense for our purposes. Most redraft leagues will have drafters that take two quarterbacks. Best-ball leagues take at least 24. As a result, the “late-rounds” for quarterbacks would be somewhere in between making QB16 a fair place to start. Next, we need a process for evaluating matchups.

We should treat strength-of-schedule beneficiaries like streaming options at the position. As such, we can use similar criteria. Metrics like neutral passing rate, rushing production, strong opposing offenses, and weak opposing defenses are all part of the evaluation. But the quarterbacks themselves are our primary concern. Now, let’s take a look at the late-round quarterback landscape for 2021.

Draft Strategy
6 Quarterbacks Primed to Break Out in 2021