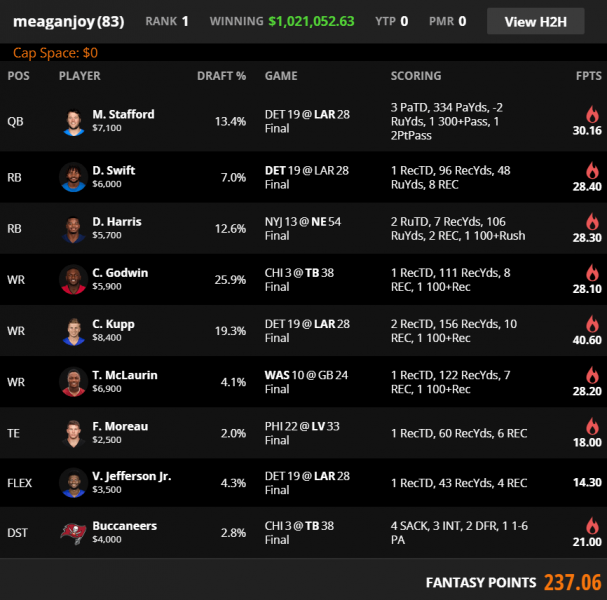 Using four players from one of the most popular games of the week can rarely be seen as a huge leverage opportunity, especially when the quarterback is in over 13% of lineups, but this winning Millionaire stack lapped the 39% of lineups that rostered Darrell Henderson instead. That ownership on Henderson was the highest for any player all season. Using the running back opposite Henderson along with a 4% punt play who was also a pivot off of the much more popular Rashod Bateman more than offset Matthew Stafford’s and Cooper Kupp’s higher ownership rates.

The other correlation play in this lineup paired one of the best values on the slate in Chris Godwin with his team’s defense, leaning into the idea of a potential blowout by the Buccaneers. Although a pass-catcher and defense isn’t a traditional stack, it’s a correlation play that has shown up in two winning Millionaire lineups this season.

Terry McLaurin had been featured multiple times in the 4for4 Breakout Receiver Model as the top breakout candidate. These regression plays don’t always hit as soon as they pop in the model but when they do hit, it’s typically in a big way without much ownership.

It’s unclear whether this lineup used late swap or had a contingency plan in place but it leveraged the uncertainty of Darren Waller’s status by getting his $2,500 backup at just 2% ownership. These late-window injury situations are almost always going to present huge leverage opportunities on the field since most DFS players either don’t want to take on the added risk or are simply too lazy to build a backup plan. 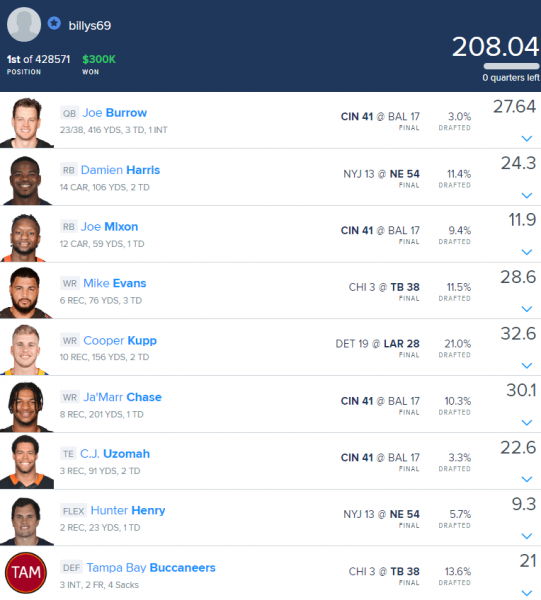 Week 7’s Sunday Million winner maximized correlation opportunities with the first true onslaught in a winning lineup this season, rostering four players from one team. With two more mini-correlations in the lineup, a total of eight players were correlated to at least one other player. All seven Sunday million winners this season have used a running back in their secondary stack.

Joe Burrow’s 3% rostered rate was the lowest that we have seen for a quarterback in the winning Sunday Million lineup this season and it was also the first time that a quarterback priced below $7,500 was in the winning lineup. When dedicating four roster spots to one offense, it makes sense to look for a discount quarterback in order to lower the salary needed to make such a big team stack.

In addition to building a low-owned stack around popular pass-catchers, this lineup differentiated itself by flexing a tight end, a strategy rarely found in winning FanDuel lineups. As noted in the offseason, teams that opt for the seldom-used tight end flex should maximize their correlation opportunities with those tight ends, as this lineup did.

In a recent DFS MVP episode, Matt Savoca and I discussed different ways to gain leverage on the field in GPPs. One way to do so that is often overlooked is by looking for unique salary allocation opportunities.

Consider the examples this week.

FanDuel’s seven most popular quarterbacks had a salary of $7,900 or higher. The Sunday Million winner rostered a $7,200 quarterback.

By looking for these lineup-building opportunities to go against the grain, DFS players maximize the chance that they can separate from the field when their players hit. Unique salary allocation can be especially useful in lineups that are on the chalky side since one or two overlooked salary tiers can drastically increase the likelihood of a lineup being able to stand out.