Throughout The DFS Playbook, we have looked at every position on the player level to extract which data is most useful for predicting future fantasy success. Because defense and special teams scoring is a team effort and the position’s fantasy scoring is based on low-occurrence events such as sacks and turnovers, getting reliable data on how specific stats correlate to fantasy scoring over time gives us little actionable information.

The data that we do have—betting lines and DFS tournament histories—does lend plenty of insight into best practices for selecting your team defense in DFS.

Since FanDuel and DraftKings use identical scoring systems for team defense and special teams, it makes our study much simpler than other positions. When it comes to selecting your team defense in DFS, nothing is more reliable or predictable than betting odds.

Both should be somewhat intuitive.

The more a team is favored by, the more likely they are to be ahead and ultimately win (NFL betting odds are extremely accurate over time). When a team is winning, the other team is forced to throw more, and most fantasy scoring opportunities for a defense—sacks, interceptions, and even forced fumbles (because of sacks)—come when the other team is passing. FanDuel and DraftKings both put a significant amount of weight on points allowed, including negative fantasy scoring for allowing a lot of points, so it makes sense that the opponent’s implied total has a strong relationship to fantasy points.

To further illustrate how heavily we should lean on betting odds, we can examine home and away splits in conjunction with the spread 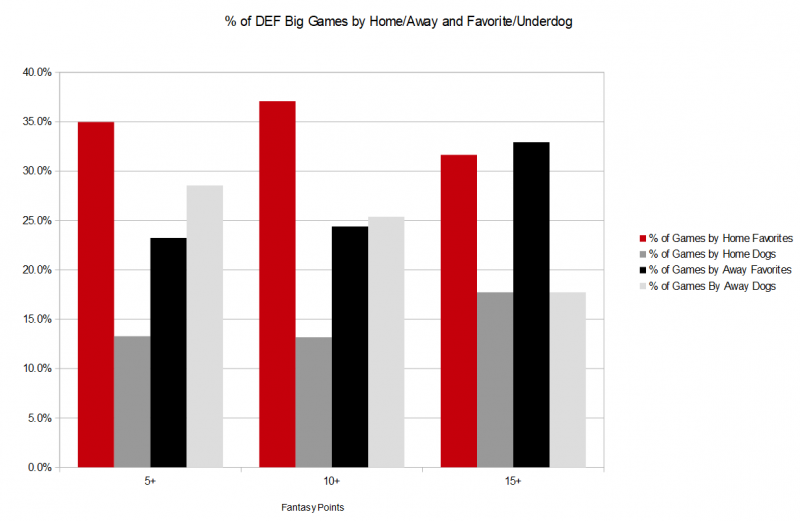 No matter how we break down scoring, it’s clear that home favorites produce the most usable fantasy games from team defenses by a wide margin. When we look for tournament-winning upside—games of 15 or more fantasy points—favorites, both home and away, overwhelmingly dominate.

One thing to note about the highest-scoring fantasy games from team defenses is that games don’t necessarily have to be low-scoring in order to produce good fantasy conditions for a defense. Over the last two seasons, nearly 30% of games where a defense scored at least 15 fantasy points came in contests with over/unders of 48 or more. When we think about the conditions for how fantasy points are scored by a defense, this makes sense. Higher scoring games should have more passing attempts than usual, giving defenses more opportunities to score fantasy points.

Seeking out high-scoring games certainly should not be the foundation of cash games but finding those circumstances—especially when a bad offensive line or inefficient, immobile quarterback is involved—is a good tactic for seeking out contrarian options in tournaments.

Unlike the other positions, there was little to learn from comparing team defense fantasy scoring to salary—the relationship between the two was by far the weakest of any position with a correlation of just 0.28. In other words, if you can fulfill the conditions above, pay down when possible.

How to Pick Defense and Special Teams in DFS GPPs

With defenses scoring fantasy points on what seems like mostly random events, it can be easy to make the roster slot an afterthought once you see a couple of GPP winners who had bad defenses that took a punt or interception to the house. The truth is, by following the guidelines laid out above and understanding salary trends and patterns in rostered percentages, you can maximize your chance for success at this roster slot as much as any other position.

Using data from the DraftKings Millionaire and the FanDuel Sunday Million over the last two seasons, we can see how the best lineups approached their team defense in terms of both ownership percentages and salary.

As discussed with tight ends, since there is only one defense slot on a DFS roster, ownership percentages stay quite flat—few teams ever end up on over 20% of rosters and it’s quite easy to be contrarian at the position. The most popular plays of the week aren’t going to increase your average ownership by a ton but you can easily offset a chalky play elsewhere in your lineup.

Among all positions discussed in The Playbook, one of the biggest ownership discrepancies that we see between FanDuel and DraftKings is at defense—Sunday Million winners have typically taken a more contrarian approach than Millionaire winners. This may just be a function of salary structures.

On DraftKings, tight salaries often make it difficult to pay for the top defenses—a limited player pool means ownership concentrates on fewer teams, making it harder to be contrarian. Looser salaries on FanDuel often allow players to roster any defense they want, no matter how high the salary. It’s notable that winning Sunday Million teams that rostered a defense with ownership below 5% usually spent about $300 less on the position than other winners—in other words, not paying for a premium defense even though it’s affordable may be contrarian in itself.

Another theory is that stacks which include a team defense have been much more prevalent among FanDuel winners than those on DraftKings. If winning players are prioritizing a defense stack over rostering team defenses with the best matchups, it would make sense that those defenses would often be contrarian picks.

Regardless of the reason for this phenomenon, the major takeaway here is that a contrarian approach to defense shows up quite often among FanDuel winners. On either site, it’s rarely a winning strategy to go with the mega chalk—few teams ever take down a GPP with a defense in over 15% of lineups.

With the guidelines laid out in the betting odds section, it should usually be quite easy to find a sub-10% team that is favored and it can sometimes even be advantageous to target teams that are small underdogs (especially if it can offset a chalky running back on the same team).

How Much GPP Winners Spend on Defense and Special Teams

Salary is another area where we see differences between FanDuel and DraftKings, specifically in how the sites manage their salary floors. While it’s rare to see a defense with a salary below $3,00 on FanDuel, DraftKings will aggressively price down big underdogs, somewhat regularly using salaries below $2,000. While it may be tempting to open up salary elsewhere by paying down at defense, it’s rarely been a winning strategy.

Although DraftKings makes it difficult to pay for the top defenses, Millionaire winners have still spent at or above the middle tier when rostering defense, using about 6% of salary on the roster slot. As previously mentioned, FanDuel allows for more salary flexibility and tournament winners there have taken advantage of that, using about 7% of salary on defense.

The reason paying all the way down rarely works is that low-salary defenses are rarely in good conditions to score fantasy points. Defense and special teams' salary is heavily influenced by point spreads and expected points allowed, so while winners don’t always pay for the biggest favorites, they are usually targeting a mid-salary favorite or small underdog.

A note on stacking defenses - Especially on FanDuel, where game flow and touchdown upside can supersede volume, using a defense to add correlation to a lineup is a fantastic strategy that is likely underused by the average player. The most common stack is RB/DEF and this build is especially useful when an unpopular defense is offsetting a chalky running back or vice-versa. Over the last two seasons, nearly 40% of Sunday Million winners have used a defense correlated with another player in their lineup.