Opportunity is one of the biggest factors I consider as I evaluate free agent signings and trades, and attempt to identify impact rookies in any given season. For years, I gauged this opportunity holistically—e.g. Kenny Golladay and Marvin Jones left Detroit, so there’s major opportunity there—but a couple of years ago I thought I’d go through the process of actually calculating vacated targets to see if it would identify opportunity that wasn’t readily apparent. I found that a few surprise teams would pop up.

Be sure to check out the other part of John's series: Using Vacated Touches to Identify Opportunity

Below is a list of the teams ranked by the number of their vacated targets per game. The Lions and Titans have a ton of targets up for grabs while Washington and the Browns do not. I also included the percentage of vacated targets and the team’s implied fantasy points—calculated by multiplying the team’s vacated targets per game by the quarterback’s half-PPR fantasy points per pass attempt over the last two seasons—since not all targets are created equal. For teams who will likely start a rookie quarterback—at this point, I'm assuming the Jaguars, Jets and 49ers—I used 1.21 fantasy points per pass attempt since that’s what the last 19 first-round quarterbacks (who started at least 12 games) averaged as rookies. 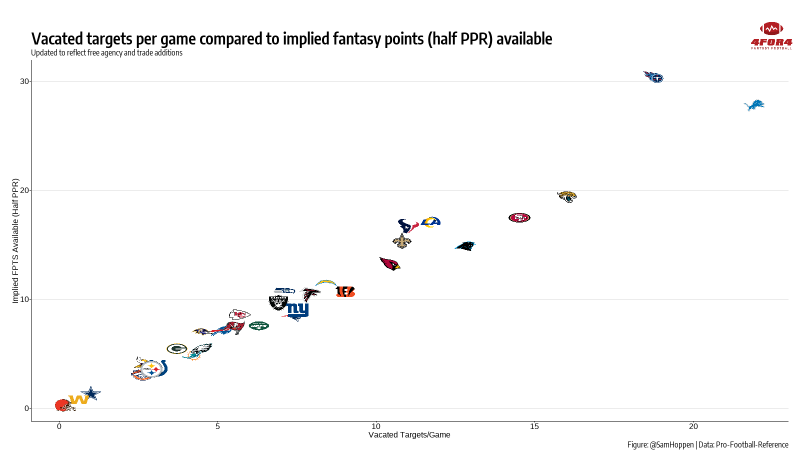