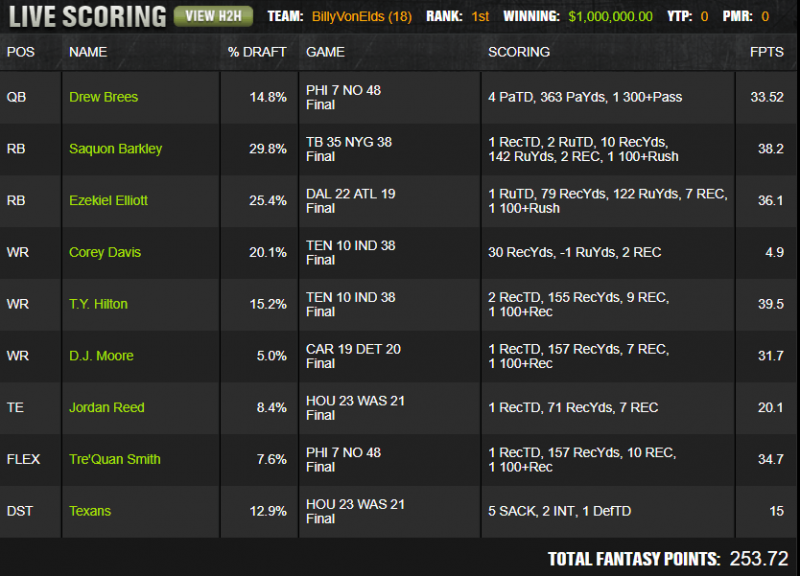 After a week where cheap running backs dominated the scoreboard, Week 11 returned to the 2018 status quo as BillyVonElds took home a cool $1 million by building a lineup around chalky, expensive running backs. In fact, this was one of the chalkier lineups we’ve see this season with only three players owned in fewer than 10 percent of lineups and no roster slot filled by a player on fewer than five percent of lineups. As we’ve seen in the majority of winning Millionaire lineups this season, BillyVonElds opted for a wide receiver in the flex position and he was also able to top a field of over 175,000 entrants even with a dud from Corey Davis.

BillyVonElds took a similar approach to both of his dart throws, rostering TreQuan Smith and D.J. Moore as ancillary pass catchers in popular offenses that were expected to be some of the highest scoring of the week. In the two games preceding Week 11, Moore led all Panthers receivers in snaps. Smith ranked third in snaps among Saints’ skill position players in the four games leading up to Week 11, trailing only Drew Brees and Michael Thomas in that span. While we prefer to roster players who are seeing volume in their respective offenses, looking for players who are simply on the field the most can help uncover hidden GPP-winning gems. 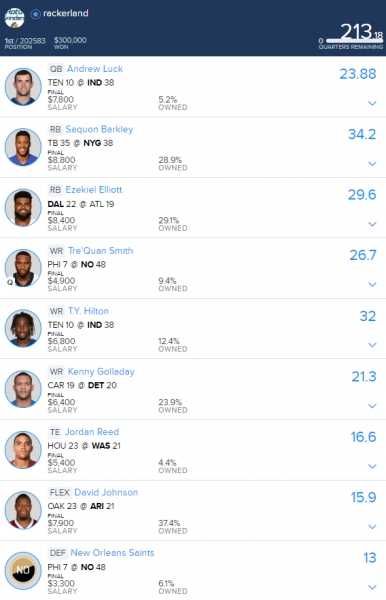 rackerland took a page out of the 4for4 tournament strategy book, offsetting a high-owned core with a low-owned stack. T.Y. Hilton was relatively popular but few owners paired up Hilton with Andrew Luck, fearing a Titans defense that had just stymied Tom Brady and the Patriots. Luck, however, hasn’t just been matchup proof, he’s been record-breaking. Going into Week 11, Luck had thrown at least three touchdowns in six straight games including three against the Jaguars in Week 10.

While Jordan Reed was in a fair amount of lineups on DraftKings—for a tight end, at least—he went mostly ignored on FanDuel. This likely had to do with the fact that Reed hadn’t scored since Week 1 but through 10 weeks, only four tight ends had more targets and that volume eventually results in scores. Additionally, Washington was facing a Texans defense that went into the week ranked 28th in schedule-adjusted fantasy points allowed to tight ends.

Last week, I highlighted running backs who had recently seen an uptick in volume after breakout running backs such as Aaron Jones led winning tournament lineups. This week, we’ll take a look at receivers who have recently seen significant snaps or targets. Combined with last week’s review, some of the under-the-radar plays listed below could make for GPP targets in the coming weeks. Take the Dolphins for example—over the last month, DeVante Parker and Danny Amendola have both played over 85 percent of Miami’s snaps and are averaging over seven targets per game. This week, they will face a Colts defense that ranks 23rd against wide receivers in a game with a projected total over 50 points.

Tournaments
The Top DFS Running Back and Defense Stacks: Week 12