Notes: Touches for running backs are calculated by adding carries and targets. An asterisk (*) next to a player indicates that they were on bye in Week 7.

Lawrence was on a bye in Week 7, so nothing really changed in his fantasy outlook. Continue to treat up as a matchup-dependent streaming option.

Sunday was a bad day for just about everything related to the Jets. Not only did they get blown out by the Patriots, but Wilson actually went down with a knee injury in the second quarter and missed the rest of the game. He shouldn’t be anywhere near rosters in all fantasy formats.

Jimmy Garoppolo returned from injury and assumed the starting role in San Francisco, meaning that Lance has once again become essentially irrelevant for fantasy. It might be worth keeping him on the bench given Jimmy G’s injury history, but don’t hesitate to drop him if you need to pick somebody else up.

Yikes. Fields was pummeled by the Buccaneers so badly on Sunday that I thought Tampa Bay had stolen Chicago's plays. The Bears' passing game is incompetent, and the offensive line doesn’t do Fields many favors, either. He’s not worth rostering in fantasy leagues, especially given his disappointing output running the ball.

Mac Jones had the best fantasy performance of his career in the Patriots’ 54-13 smackdown of the Jets. He threw for over 300 yards and had two passing touchdowns, leading the team on a total of six touchdown drives (backup QB Brian Hoyer came in and had the other one). It’s encouraging to see that he is capable of having a standout performance like this (even if it is against a horrible team), so Jones can be treated as a matchup-dependent streamer moving forward.

Harris was on a bye in Week 7, but should continue to be treated as one of the most elite running back options in fantasy. He is currently the overall RB7, so you should have no qualms in plugging him into your RB1 spot week in and week out.

Williams’ fantasy day was salvaged by a 20-yard receiving touchdown on Thursday Night. He continues to see somewhere between 10 and 15 touches per week and is a FLEX-worthy option for now.

Carter saw the most touches (20) of his career in the Jets’ blowout loss, doing significant damage in the passing game. However, the Jets offense isn’t nearly good enough for Carter to be rostered in most leagues.

Kenneth Gainwell did his best James White impression on Sunday, having just 20 yards rushing but totaling eight targets and a touchdown through the air. Miles Sanders left the game in the first quarter, which is likely why Gainwell saw more touches. If Sanders misses more time with injury, Gainwell is a FLEX-able player. If not, he should be on the bench as a backup in deeper leagues, especially in PPR.

Hubbard was once again solid in relief of Christian McCaffrey, getting 17 touches en route to a top-30 performance. As long as CMC stays out, Hubbard is a dependable RB2 that can be safely started in most matchups due to the volume he sees.

Have a day, Khalil Herbert. With David Montgomery injured and Damien Williams fresh off the COVID list, Herbert gashed the vaunted Buccaneers’ front seven to the tune of 100 yards on 18 carries, adding 33 yards on five catches through the air. He’s proven he can thrive in a starting role, and should be started while Montgomery is still out. Keep him on your bench even after Monty is back, too.

It appears as if though Kyle Shanahan simply doesn’t care that he spent a third-round pick on Sermon in the NFL Draft this year, as the former Ohio State running back had zero snaps on offense against the Colts on Sunday Night. Suffice to say, he’s not worth a roster spot. On the other hand, undrafted rookie Elijah Mitchell saw the lion’s share of the touches out of the SanFran backfield and was able to channel it into a very productive fantasy performance. As long as he’s the top option for the 49ers, you can safely start Mitchell as an RB2.

Ja’Marr Chase is playing so well that he might graduate from being included in The Rookie Report. Against one of the top corners in the league in Marlon Humphrey, Chase put up a whopping 201 receiving yards including an 82-yard touchdown. He’s the overall WR2 (!) on the season behind only Cooper Kupp, and is a surefire WR1 each week.

DeVonta Smith had yet another decent but not great fantasy performance. He’s the clear top receiver for the Eagles and will therefore see enough volume to be a FLEX-worthy player, but the lack of top-10 upside is apparent.

Waddle was once again solid for fantasy this week, leading the Dolphins with eight targets (along with Mike Gesicki) en route to a top-24 finish. 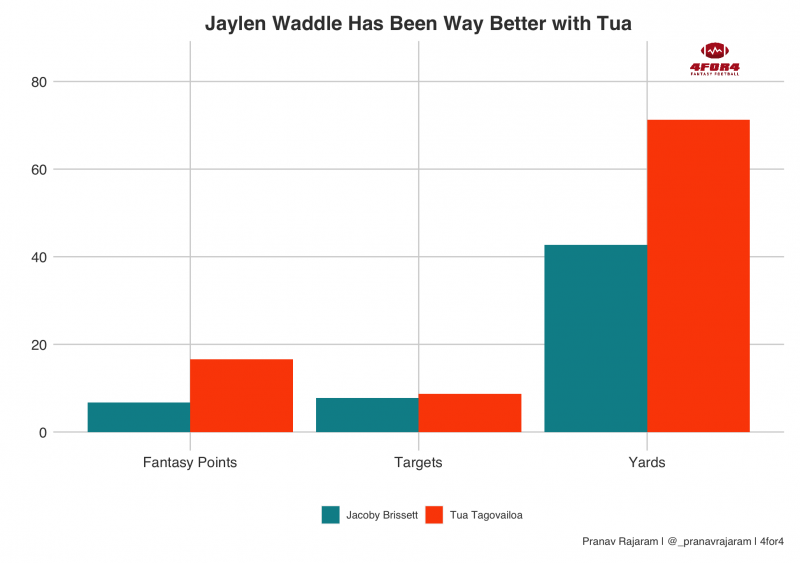 Quarterback play has been crucial for Waddle: We can see that he has been significantly better with Tua Tagovailoa under center this season—Waddle is the overall WR8 in the weeks with Tua, and WR60 with Jacoby Brissett. With his former Alabama QB now back from injury, you can safely start Waddle as a FLEX. He gets a big boost in PPR leagues as well.

The Cardinals WR2 roulette game rewarded Christian Kirk this week, meaning that Moore was largely irrelevant for fantasy. He’s nothing more than a deep-bench stash until he proves he can consistently perform.

Toney missed Week 7 due to injury, and will likely be forced to sit out the next couple of weeks as well. However, definitely keep him rostered, as he was dynamic in the playing time he did see before this week.

Bateman came off of the IR for the Ravens a couple of weeks ago, and had the first fantasy-relevant performance this past week. Given his high draft capital and immediate implementation into the offense, Bateman is worth a waiver wire pickup in most leagues. I'd spend around 5% of a FAAB budget on him.

Kyle Pitts has officially arrived. After the first breakout game of his career in Week 5, Pitts put up a whopping 163 yards on the Dolphins. He should be started confidently as an elite, top-5 tight end for fantasy moving forward.