Notes: Touches for running backs are calculated by adding carries and targets. An asterisk (*) next to a player indicates that they were on bye in Week 11.

Lawrence was quite frankly putrid in the Jaguars’ blowout loss to the 49ers, throwing for well below 200 yards in a 30-10 loss. He hasn’t proven to be consistent enough to be a fantasy starter and is nothing more than a desperation option.

Wilson missed the Jets game with an injury but might make his return to action in week 12. He’s still not worth rostering in any form of fantasy format.

Lance continues to be the backup quarterback for the 49ers, and will not be fantasy-relevant as long as that remains.

Fields left the Bears game early with an injury, but wasn’t great before that either. 4for4’s Adam Hutchinson writes that the severity of the injury could lead to Fields missing anywhere from 0 to 4 weeks, but with a Thursday afternoon Thanksgiving game coming up, I’d assume Fields is out. He can be dropped in most 10 and 12-team formats with the home stretch of the fantasy regular season coming up.

This was a typical Mac Jones fantasy performance, as he wasn’t forced to do much in the Patriots’ big victory on Thursday Night. Leave him on the waiver wires.

Najee turned in yet another incredibly solid fantasy performance, finishing as a top-12 running back for what feels like the 100th time this season. He’s one of the most dependable players in all of fantasy football and can be safely fired up as an RB1 each week.

Williams was on bye this week, but that shouldn’t affect his fantasy value too much. Unless the Broncos used the week off to establish Williams as the top dog in the backfield (over Melvin Gordon), I’d continue to treat Javonte as a FLEX-able player without much upside.

It’s unfortunate that Carter, who was starting to get a hang of things in the NFL, suffered an injury this week and will be forced to miss at least a couple of weeks. Because of this untimely injury, Carter can be dropped if you need to pick someone up to make a playoff push. Otherwise, I’d stash him at the end of the bench or on an IR spot in case he makes a return.

Stevenson saw a near 50/50 timeshare in the New England backfield, alternating series’ with Damien Harris. Given his talents as a runner, it is very possible that Stevenson continues to see such a workload, making him a FLEX-able player in fantasy—this New England running back room could become like Denver’s, with Stevenson playing the Javonte Williams to Damien Harris’ Melvin Gordon.

Note: Giants wide receiver Kadarius Toney was not included in the initial publishing of this article as he played on Monday Night.

Chase was able to salvage his fantasy day with a late touchdown, but finished with just 32 receiving yards. I still wouldn’t be worried about his fantasy value—Chase can continue to be treated as a top-15 fantasy option week in and week out.

Smitty turned in yet another decent fantasy performance, totaling 61 receiving yards on four catches. His fantasy value has remained the same basically the whole season—a FLEX-able player with a boost in PPR formats.

Waddle had a stellar fantasy day on Sunday, finishing with eight catches and a rushing touchdown. He has a clear connection with Tua Tagovailoa and can be FLEX-ed so long as Tua remains under center. He gets a huge boost in PPR as well, as Waddle has had at least six catches in 6 out of 11 games this season.

Moore did his best running back impression against the Seahawks this week, racking up 11 catches for just 51 yards. Despite the solid day, I wouldn’t put too much faith in Moore moving forward, and he’s nothing more than a deep-bench stash.

Bateman wasn’t able to do much with Tyler Huntley under center instead of Lamar Jackson, leading to a subpar fantasy output. However, I wouldn’t get too down on him, as he has proven to be a reliable option with Lamar at quarterback. He’s a strong receiver off the bench that can be started in deeper leagues.

Moore had a breakout performance versus the Dolphins on Sunday, accumulating north of 160 receiving yards and a touchdown en route to an overall WR3 finish on the week. 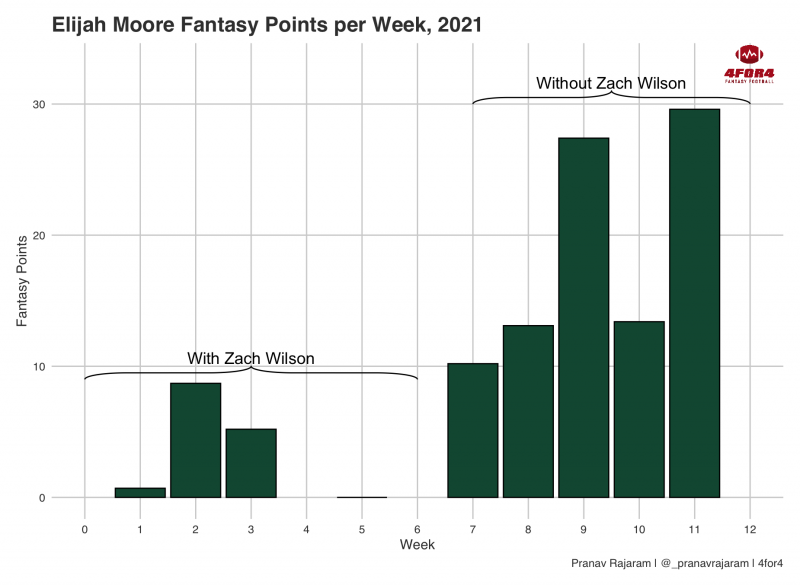 One interesting note in Moore's production is his splits with and without Zach Wilson at QB. He's much better without the #2 overall pick under center with much of his breakout coming with Wilson injured. However, while Wilson is expected to make his return to the lineup in the coming weeks, Moore has proven that he has enough talent and upside to be FLEX-ed in fantasy.

Pitts was essentially shut down by Bill Belichick on Thursday Night and was unable to produce despite the absence of both Cordarrelle Patterson and Calvin Ridley. Continue to start Pitts as a TE1 each week, but fantasy managers might have to lower their expectations for the former Florida superstar a little bit.

Freiermuth continued his promising rookie season, catching his fifth touchdown of the season on Sunday Night. He’s one of the best tight end streaming options moving forward and can be treated as a back-end TE1.