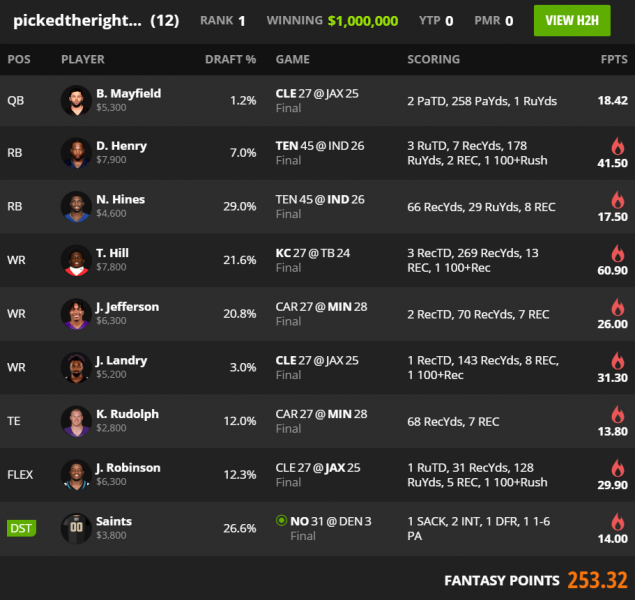 Injuries and COVID concerns wreaked havoc on Week 12 but that didn’t mean there weren’t some predictable outcomes—this week’s winning lineup carried an average ownership of 14.8%, the second-highest of the season. After three straight weeks of winning lineups rostering three or fewer correlated players, Week 12’s winner had seven players with some correlation to another player in the lineup. This was just the third winner this season to use a quarterback priced below $6,000 and only the fourth to use a running back in the flex.

The most obvious differentiator in this lineup was the Browns’ stack, which paired up a battery with two players who combined for just 4.2% ownership. Rostering Baker Mayfield and Jarvis Landry offered massive leverage off of a Cleveland backfield that had two running backs in over 10% of lineups with Nick Chubb on nearly 20% of Millionaire rosters. The Browns went into the week with the fourth-highest implied total of the week and were facing a Jaguars defense ranked in the bottom 10 in schedule-adjusted fantasy points allowed to every skill position. Landry had seen nearly 30% of Cleveland’s targets since Odell Beckham’s injury.

Derrick Henry was a pivot off of the uber-chalk Dalvin Cook, who was in over 40% of Millionaire lineups. Although their salaries were $1,600 apart, Henry was priced as the RB3 on the slate. The Colts ranked as a top-10 defense against running backs going into the week but they were down both starting tackles and linebacker. Henry is almost always in GPP consideration when he has a low ownership projection, regardless of matchup. 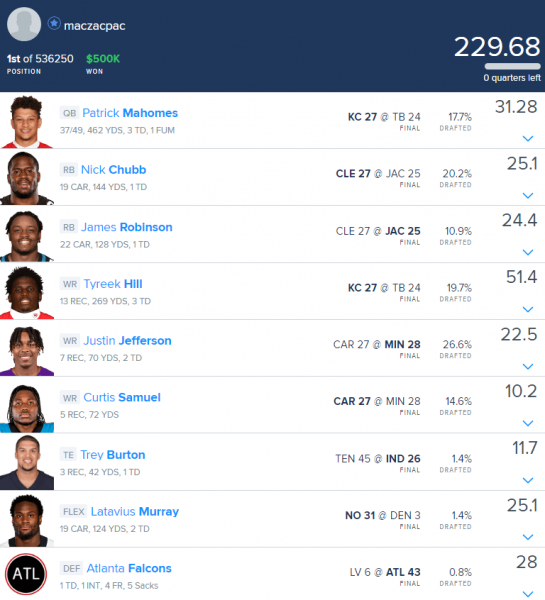 When referencing a stars-and-scrubs lineup approach, it’s usually in reference to salary, but this week’s Sunday Million winner took a barbell approach to ownership, rostering just three players in fewer than 10% of lineups but each of those players was in fewer than 1.5% of lineups.

In the Saints’ first game with Taysom Hill at quarterback, Latavius Murray had one more touch than Alvin Kamara. With New Orleans set up to blow out an opponent that didn’t have a quarterback on the roster, riding the trend towards Murray proved to be a risk worth $500,000.

Trey Burton hasn’t played many snaps but he has been targeted at the highest rate of any Colt besides Nyheim Hines, and Burton was likely used as a leverage play off of the chalky Hines.

The only plausible reason to use Atlanta’s defense was as a huge salary-saver in a week where most rosters would have a defense priced above $4,000.

It’s impossible to predict a slate-breaking performance like Tyreek Hill had on Sunday, but it isn’t hard to narrow down which players have week-winning performances in their range of outcomes. In the Chiefs offense, Hill may be the outlier of all outliers but going into Week 12, few players were seeing the combination of volume and high-leverage targets that Hill was. In the month leading up to Week 12, Hill was one of four players averaging at least 10 targets per game with at least 10 deep targets (15+ yards downfield) in that span.

Narrowing down the pool of players that can actually break a slate and not just hit tournament value is important.

Zooming out beyond the few double-digit target receivers, here are all the players averaging at least eight targets per game over the last month along with their number of deep targets. Those with the most high-leverage opportunities to go along with their volume are potential slate breakers