DraftKings officially got the NFL DFS season rolling by releasing pricing for the Week 1 Main Slate. While injuries and changes in depth charts will surely open up some major values by the time we actually see kickoff, DK seems to have done a decent job of posting relatively tight salaries, at least for a slate of games that is roughly six weeks away. Still, some players stand out. Below are the ones who caught my eye. 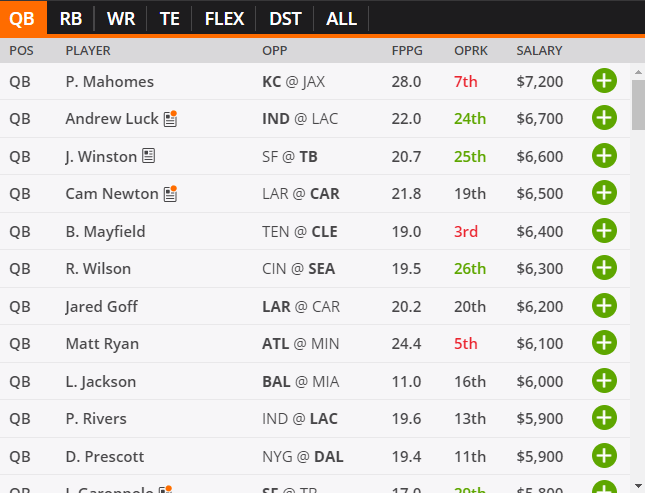 Early Week 1 lines peg the Eagles as the biggest favorite of Week 1 (-9) with the highest implied point total of the week (28.25). With DeSean Jackson back in the mix in Philly, this is an offense that should be able to air it out with the best of them, as Jackson’s presence alone typically boosts his quarterbacks’ success. Priced as the QB13, Wentz leaves plenty of salary open for stud running backs and he should have no problem hitting value, even in a blowout scenario.

The Rams and Panthers look like the best bet for a shootout with an early over/under of 51 and a spread of just three points. Cam Newton ($6,500) and Jared Goff ($6,200) are both priced as top-seven quarterbacks but Cam always offers a high floor because of his legs and Goff could be especially busy this season if Los Angeles really does limit Todd Gurley’s workload. Even those who don’t want to pay up for quarterbacks in cash could find plenty of unique game stacks in this one.

Playing virtually any quarterback against Tampa Bay last season was a winning recipe and the Buccaneers have done little to expect much better from their defense in 2019. Jimmy Garoppolo ($5,800) will likely be an unpopular play in his first game back from his torn ACL but this game could be prone to fireworks, especially with Bruce Arians' air-it-out style on the other side.

Kyler Murray ($5,600) and Josh Allen ($5,600) are both priced as the QB14 and while their games look like low-scoring affairs, these quarterbacks are going to give you plenty on the ground. Murray will get the benefit of Kliff Kingsbury’s air raid offense and while Allen doesn’t throw a lot, when he does it’s often deep, which can lead to some huge boom weeks. 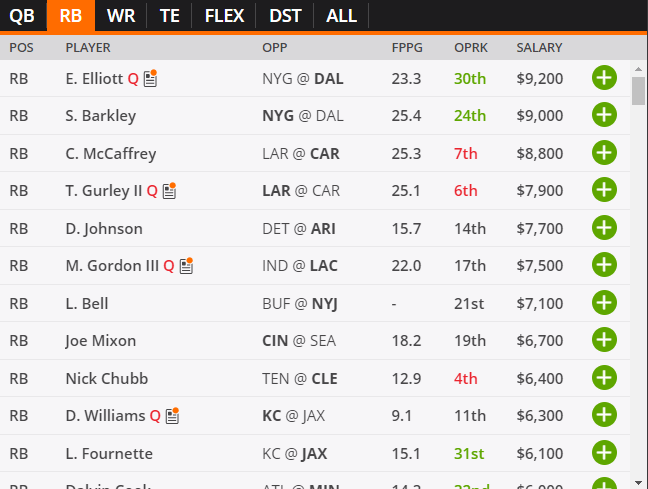 Priced as the RB12, Dalvin Cook is a back that can see as much work as anyone in Week 1 as a home favorite against a defense that struggled mightily against running backs last season. Minnesota was one of the most pass-heavy teams in the league last year but after the Vikings fired John DeFilippo late in the year, we saw a much more run-first approach. Expect that focus on the run to continue under Kevin Stefanski.

Roster construction is going to hinge on two potential holdouts, namely Ezekiel Elliott and Melvin Gordon. Early indications are that Gordon is more likely to miss time but if these two studs sit, Austin Ekeler ($5,500) and Tony Pollard ($4,500) will be two of the most popular backs on the slate as home favorites. Ekeler isn’t priced so low that he will necessarily be a must-play, especially because we’ve seen Justin Jackson ($4,000) get significant work when Gordon has been out.

Seattle is favored by over a touchdown and Chris Carson ($5,700) will get the privilege of opening the season against a Bengals defense that 4for4 projects as a bottom-five defense against running backs. Even if Carson does cede some work to Rashaad Penny ($4,900), there should be plenty of backfield touches to go around in Brian Schottenheimer’s run-first offense. If Gordon sits out Week 1, Carson could be a great pivot off of Ekeler.

Mark Ingram ($5,100) will get his first work as Baltimore’s featured back as a 4-point favorite against an atrocious Miami run defense. The Ravens had the seventh-most running back carries in the league after Lamar Jackson took over at quarterback last year and we know that any Greg Roman offense is going to pound the rock. 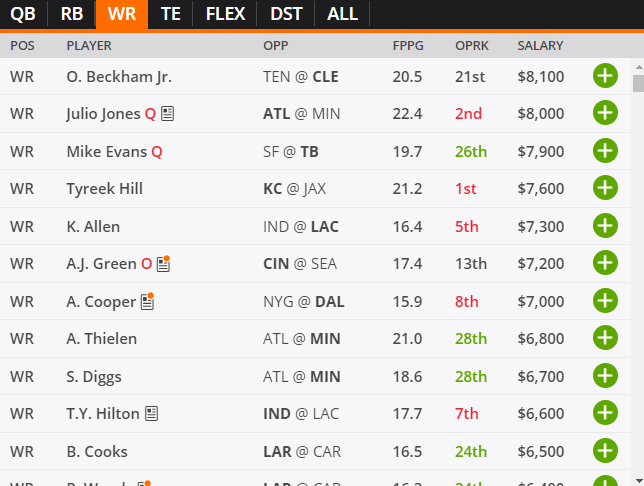 Any team playing against the Chiefs is going to be forced to throw and Kansas City was consistently one of the best defenses to target through the air last season. The arrival of Nick Foles in Jacksonville boosts this entire passing game but it’s Dede Westbrook that should be the main beneficiary. There may not be a better bet at a sub-$5k wide receiver to see double-digit targets in Week 1.

I mention Carolina/LA as one of the best games to target for a potential shootout and while D.J. Moore will be one of the more popular receivers of the week, priced as the WR20, Curtis Samuel ($4,200) could see similar target numbers at a deep discount. In the same vein, Dante Pettis ($5,400) pairs with Jimmy G for an affordable stack against a vulnerable pass defense.

With A.J. Green likely out for at least Week 1, Tyler Boyd ($5,800) should end up being one of the most popular plays at his position, especially since the Bengals should be forced to throw as early 8.5-point dogs.

The return of Tyreek Hill has cooled some of the offseason hype surrounding Sammy Watkins ($5,000) but his WR24 price tag means cheap exposure to the most expensive quarterback of the week. In the seven games in which Watkins saw at least five targets last season, he averaged a 5.3/71/0.43 line or 16.6 DK points per game after accounting for his two 100-yard bonuses. 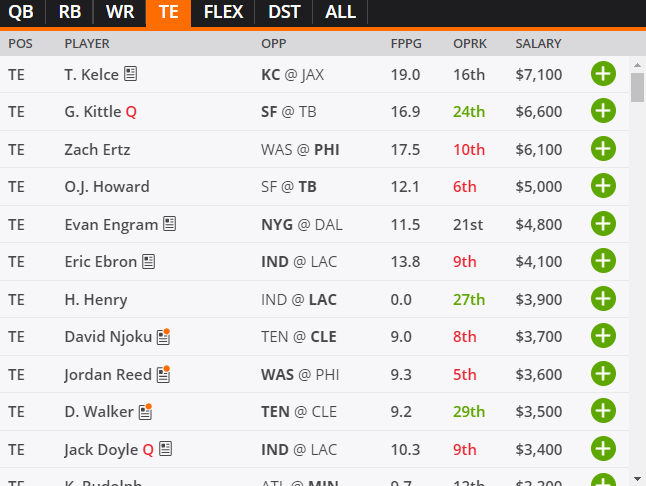 One of my favorite best-ball targets this summer, Mark Andrews built some late-season rapport with Lamar Jackson and could challenge for the team lead in targets this year. Andrews runs as deep of routes as almost any tight end in the league and Greg Roman prefers his quarterbacks to throw downfield as much as any coach in the league when he does ask them to throw. Remember that it was Roman who oversaw the Colin Kaepernick/Vernon Davis connection in San Francisco and there are some parallels with Jackson and Andrews. It’s always nice to pay down at tight end and this could be the cheapest we see Andrew all season.

Travis Kelce, Zach Ertz, and George Kittle all led their team in targets in a single week at least 10 times last season. The only other tight end to do so more than five times: Jordan Reed ($3,600), who opens the season as the TE9 on DK and is finally healthy (for now). Priced right behind Reed is Delanie Walker ($3,500). With Walker’s absence and Marcus Mariota’s injuries, the Titans passing game struggled mightily in 2018 but Mariota gets his favorite pass catcher back and it doesn’t hurt Walker’s cause that Tennessee’s new play caller is their former tight ends coach.

Atlanta boasted one of the best passing attacks in the league last year and the return of Dirk Koetter should mean an even more pass-heavy attack—in three seasons with Dirk Koetter calling plays for Matt Ryan, the Falcons never ranked lower than second in neutral passing rate. With all eyes on Julio Jones and Calvin Ridley, Austin Hooper ($3,200) is a cheap source of red zone work. 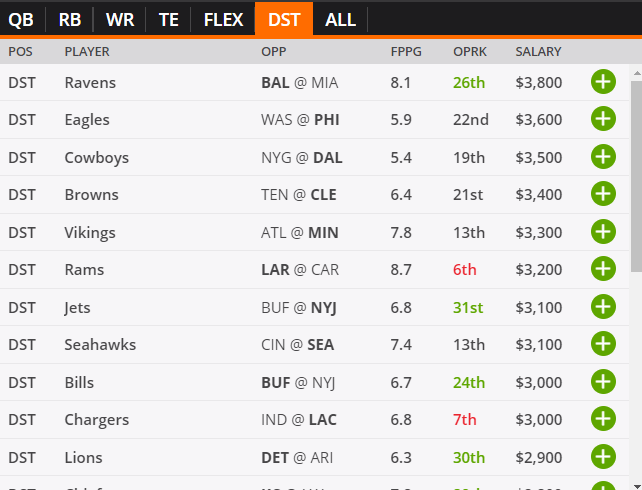 Looking to a road defense in a potential shootout isn’t what you typically think of when targeting a defense, but it’s the games that feature a ton of passing that offer tremendous fantasy upside. Bruce Arians is going to ask his quarterbacks to throw as much as any coach and he’s going to ask them to throw deep, increasing the variance of each throw. Jameis Winston is always liable to go off the rails and Nick Bosa’s debut could wreak havoc on an offense with a ton of hype going into the season.

The Chiefs ($2,800) are the cheapest favorites of the week. While Kansas City isn’t a good real defense, they will be facing a quarterback making his first start for a new team and Jacksonville will be forced to throw to keep up with KC’s dominant offense. Even if the game stays close, the Jaguars may be more pass-heavy than some expect if new offensive coordinator John DeFilippo can get in Doug Marrone’s ear.

Fantasy owners are overly excited about the Cardinals offense but don’t forget that a rookie head coach will be making his NFL debut with a rookie quarterback. The Lions ($2,900) are early favorites and Detroit may have an argument for the best defensive line in the league. If Kyler Murray ends up being a popular play, the Lions will naturally be a low-owned unit.