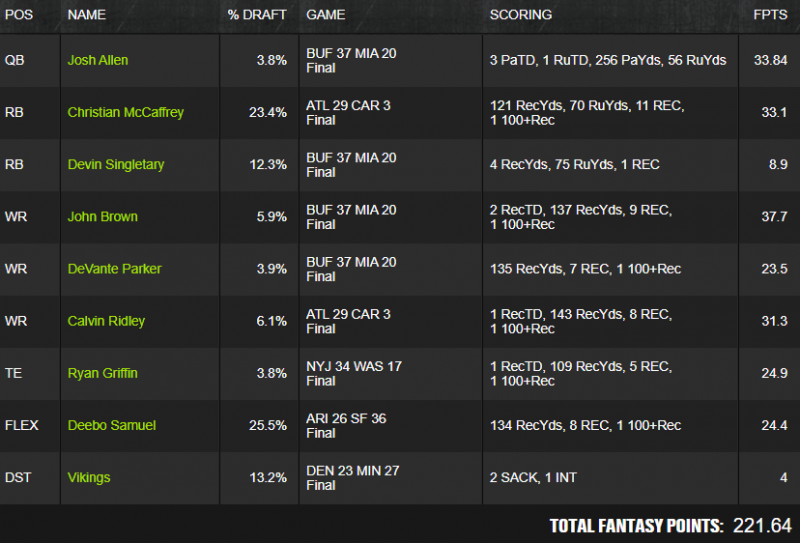 It’s not always the best idea to try to fill a lineup with a bunch of low-owned plays—it’s often not necessary to win even the largest GPPs and it’s almost impossible to hit on all of your dart throws. When those low-owned plays are highly correlated, though, it could make sense. nhpain offset some of the highest-owned players of the week with an unpopular game stack. By rostering a bunch of unpopular players in the same game, it still minimizes the number of times you have to be right—if that game goes off, a lot of your plays are going to hit. This might not be the best default strategy—this is only the fourth time this season that the average ownership of the winning Millionaire lineup was below 12%—but it makes sense to mix it in since the vast majority of lineups are often looking for low-owned plays in the most popular games.

Buffalo didn’t have an especially high implied point total but there was still some merit to stacking their side of the ball as Pat James suggested. Miami came into Week 10 as the only defense ranked in the bottom 10 in schedule-adjusted fantasy points allowed to every skill position. Anytime you are stacking one team it is at least worth considering running it back with a player from the opposing offense. With Buffalo favored by nearly a touchdown, targeting a Dolphins pass-catcher made sense from a game script standpoint and DeVante Parker had seen over a quarter of Miami’s targets in the month leading up to this game.

Carolina’s offense was expected to be one of the most popular of Week 10 and in those situations looking for leverage on the other side is often a profitable tactic. Brian Hill was a chalky, cheap running back, Julio Jones was an obvious correlation play for anyone looking at this game and Russell Gage gained traction as a punt play leading up to Sunday. With Austin Hooper out and virtually every other skill player in this game being considered by the public, Calvin Ridley emerged as an obvious leverage play in retrospect.

It’s not an extremely high ranking but Ryan Griffin did register as a top-seven ceiling value at his position in the 4for4 lineup generator last week. The Jets tight end had shown some volume potential with at least a 17% target share in two of his previous three games heading into Week 10. With five of the top tight ends not on the main slate, it made sense to punt the position and go contrarian. The top tight ends of the week had some obvious question marks and none had been so dominant that it made sense to eat the chalk at a volatile position. 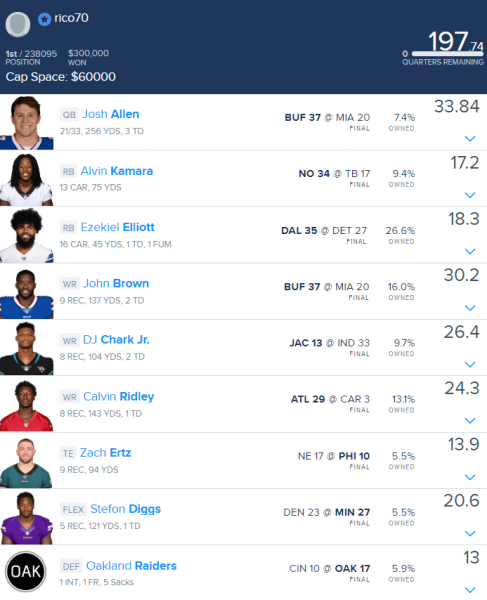 One of the most dominant strategies on FanDuel since they implemented the flex has been to use a running back in that spot. The scoring system favors running backs so it’s logical to try to roster as many as possible. The strategy has been so dominant that the vast majority of owners have seemed to take this approach to lineup building, possibly to a fault. This may have opened up the door for owners willing to deviate from the running back in the flex strategy at least sometimes—this is the third time this season the winning lineup has used a wide receiver. This isn’t to say that every lineup should use a wide receiver in the flex but if you are building 100 lineups, it is probably a good idea to flex a wide receiver in 15–20 of them.

Zach Ertz and Stefon Diggs were the major differentiators here. As noted above, I pegged this as a good week to stray from the field at tight end and Ertz was largely ignored despite leading his position in targets per game going into the week. With the slate stripped of the top players at the position, Ertz was criminally under-owned, regardless of the matchup.

Game script obviously didn’t go as expected in Minnesota but Diggs was the clear number one option with Adam Thielen out. Going into the week, Kirk Cousins had been one of the most efficient fantasy quarterbacks in the league and efficiency in the passing game often trumps matchup. A low-owned receiver who will be the clear number one target in that scenario is often going to be worthy of a look.

Over the past few weeks, I’ve mentioned in this space looking for recent trends in favor of often misleading season-long numbers. Those not looking at smaller samples likely missed out on a player such as DeVante Parker this week. Here is a look at other receivers who have been given significant volume in recent weeks, specifically every player who has played at least 75% of their team’s snaps while also averaging at least seven targets per game. Many of these names are not a surprise but the ones that are could be GPP winners. Chris Conley, for example, shows up on this list but could go overlooked while everyone chases D.J. Chark’s points going into a game against a Tennessee defense ranked in the bottom half of the league in schedule-adjusted points allowed to wide receivers.