I will be walking you through the process of constructing the optimal lineup to dominate your cash games on the main slate in Week 1. As a starting point, I use the optimal FanDuel and DraftKings lineups from our Lineup Generator. For each, I analyze projected value to determine which players you should absolutely lock in. I then determine the most optimal alternative lineup constructions centered around those locked-in players, which will provide you with multiple avenues toward fielding a winning lineup come Sunday.

Here is the optimal FanDuel lineup by projected points: 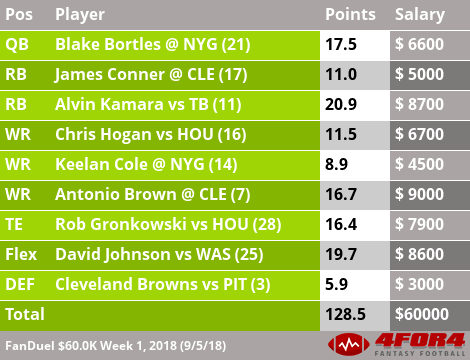 With a decent matchup against the Giants, Blake Bortles lands in our top 10 by projected points at the QB position. Given his low price, he lands third in our value rankings. If you don't want to trust Bortles, you can pay up slightly for Patrick Mahomes ($6,700) or Andy Dalton ($6,800), who are both projected similarly to Bortles. While Mahomes's matchup against the Chargers looks worrisome, Dalton has a nice matchup against the Colts.

Antonio Brown is our top-ranked WR, not only by projected points but also by value. As usual, that is a strong clue that you want him in your lineup. However, it would not be unreasonable to instead bring in our second ranked WR by both metrics, DeAndre Hopkins ($8,800). Doing so would also net you $200 to spend elsewhere.

Like Gronkowski, Chris Hogan has a great matchup, with the second-highest implied team total, and stands to benefit from the absence of Julian Edelman, which will make Hogan the team's WR1. He sits in the top 12 of our receiver rankings by both projected points and value. That said, if you are looking to free up some funds (say, for an upgrade at QB), a downgrade to Michael Crabtree ($6,600) would be reasonable.

While we normally look for favorites when choosing a defense, the min-priced Browns are a viable choice this week. Adding the top cornerback in the 2018 draft, they have a lot of talent on defense, and as we discussed above, the Steelers will likely be without their top RB, LeVeon Bell. Plus, the Steelers generally struggle on the road, so I would not be afraid to roll out the Browns this week. If you are looking for alternatives, however, a slight upgrade to the Dolphins ($3,200) is the best option. They rank second by value, just ahead of the Browns. The Dolphins play at home versus the Titans, who struggled in their third preseason game. While the Titans are favored, it is expected to be a close game.

Here is the optimal DraftKings lineup by projected points: 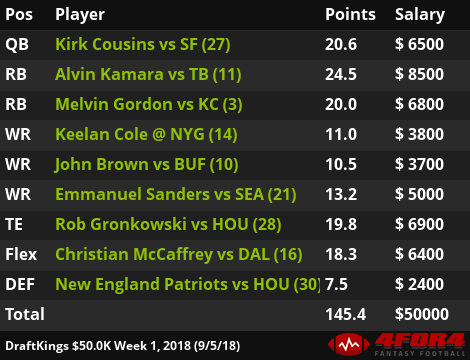 Kirk Cousins is a top-seven value at the QB position and also lands at seventh in our point projections. Given his past performance in Washington, Cousins should continue to be a safe, efficient quarterback. The Vikings are heavy favorites with a high implied team total of 26, which is likely to translate into points for Cousins. If you want more upside at the position, the best alternatives are an upgrade to Deshaun Watson ($6,700) or a downgrade to Russell Wilson ($6,200), last season's top two QBs by fantasy points per game. Both players likely have lower floors than Cousins due to matchup.

Christian McCaffrey ranks in the top five by both value and projected points at the RB position. Usage in the preseason indicates that McCaffrey is likely to see an increased rushing volume this season, making him a true three-down back. The Panthers are also home favorites, which should mean TDs for McCaffrey. The only reasonable alternative is a sideways move to Saquon Barkley ($6,700). Despite this being his first regular season game, we have no reason to believe Barkley will not be a workhorse back as well.

Emmanuel Sanders is our fifth best value at WR. The addition of rookie Courtland Sutton on the outside has allowed Sanders to move into the slot for the majority of the snaps. That is the favored position for his quarterback, Case Keenum, who made a star out of Adam Thielen in the slot last season. If you don't like Sanders, there is an easy sideways move to Jamison Crowder ($5000), who will likewise be playing with a quarterback, Alex Smith, that loves slot receivers. Alternatively, if you want to free up some cash for moves elsewhere, consider a downgrade to Kenny Stills ($4,700), an efficient receiver last season who is likely to see an increase in targets with DeVante Parker out and Jarvis Landry on another team.

As mentioned above, we'll need to include either John Brown or Keelan Cole. The latter has become a starting receiver for the Jaguars after Marqise Lee's injury. One alternative to Cole is to pay up slightly for his teammate Dede Westbrook ($3,900). While we have Westbrook projected lower, his slot role is likely somewhat more reliable than Cole's role on the outside. A high-upside option to is to pay up for Chris Godwin ($4,100), who appears set to overtake DeSean Jackson on the depth chart sooner rather than later. Finally, with a couple of downgrades elsewhere, Tyler Lockett ($4,300) becomes an option here. With Doug Baldwin recently injured (though expected to play) and Jimmy Graham gone, Lockett also looks set to see an increase in targets and, like any of Russell Wilson's receivers, has big play potential.

Tournaments
The Top DFS Running Back and Defense Stacks: Week 1