How Not to Lose Your Fantasy Draft in the First Round

Because picking a successful player in the first round of fantasy drafts is roughly the equivalent of betting on red or black in the casino. That’s what the data tells us over the past six seasons.

But unlike the spin of a roulette wheel, there is information at our disposal to help us increase those odds of successfully hitting on our first-round pick in hopes of not becoming the Lloyd Christmas or Harry Dunne of our leagues.

Our goal is not to hoist the trophy with our first-round pick. Our goal is to get an asset that will keep us in contention most of the year.

There are ways to avoid blowing your draft if you make the right decisions under pressure. Think Sashi Brown “misplacing” the fax from Hue Jackson that would have sent A.J. McCarron to the Browns for second- and third-round picks.

Below are four ways to not lose your fantasy league in the first round of 2018 drafts.

(For the Love of God) Don’t Draft a Quarterback

Write this in big bold letters on the top of your cheat sheet or attach a note on your computer. This is your mantra.

I know you’re still out there, first-round quarterback drafters. In my keeper league of record that is entering its 14th year, there are still teams that will use one of their keepers (in this league, a first- or second-round pick) on a quarterback. Aaron Rodgers will be kept again this season. I’m sure of it. I led the fantasy football coverage for Colts.com in 2014 and 2015, and I can’t tell you how many fans asked me if they should pick Luck in the first round those seasons. I had another friend last preseason ask if he should keep Matt Ryan in a six-points per passing touchdown league.

The difference between QB1 and a mid-to-late-round quarterback continues to shrink. Just last season, our weekly streaming quarterback column should have proven once and for all that drafting a quarterback early is pointless.

For the season, our top streaming picks averaged 23.9 fantasy points per game. That’s ahead of what Deshaun Watson averaged as the QB1 in fantasy points per game and was more overall points than Russell Wilson had as the top fantasy quarterback. The average of all of our streaming picks (16.9 FPs/G) multiplied by 16 weeks is more than what Ben Roethlisberger scored as the QB7 in total points.

One look at this graph should tell you all you need to know: 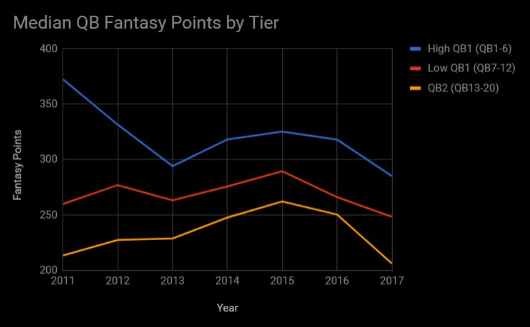 Across all tiers, quarterback fantasy scoring was the lowest it has been since 2011. High-end QB1s again came nowhere near the stratospheric results of the 2011 season, when it was worth using an early draft pick on this position. Even if you do not want to stream QBs, the data tells us low-end QB1s have stayed relatively consistent year-to-year since 2011 and the gap has shrunk significantly between high-end QB1s and low-end QB1s.

For those of you in six-points per passing touchdown leagues, you may be arguing it’s more valuable in that format to take a top quarterback early. Aaron Rodgers is still outside our top-20 players in projected VBD in that format. And Tom Brady? He barely cracks the end of the third round in projected value.

“But I’m in a superflex league and it’s six-points per passing touchdown.” Erroneous! Erroneous on both accounts! Rodgers still doesn’t crack our top 12 in projected VBD.

This was more of an issue in previous seasons, when Gronk was being touted by many analysts as a first-round option; however, with injury concerns, retirement concerns, and potential organizational friction, his stock has fallen to the second round, and sometimes even the third round.

I will say if he falls to the third round, it’s almost an automatic pick for me this season at that spot. The WR position appears extremely deep this year that drafting Gronkowski in the third would still allow me to wait on my WR2, WR3, and quarterback until later rounds. We actually have Gronkowski similarly projected with Travis Kelce and Zach Ertz, but the touchdown upside for Gronkowski is much higher, despite the injury risk.

Even if you play in TE-premium leagues, our top tight end in that format is projected for 16.1 points per game. We have a total of 12 RBs/WRs projected for more than that in this format, and with our top-three TEs sharing a similar projection, it becomes far less necessary, if your strategy is to draft a top TE, to spend a first-round pick on one, as opposed to waiting for one of the remaining two in the top tier.

Use Vegas to Help Find Your Top RB or WR

Studying player props can help give us even more of an indication of which players enter a season with stability in their offense, often leading to fantasy success.

DeAndre Hopkins isn’t a concern because of a low floor necessarily, but he’s a value concern. He’s going to cost you a pick in the middle of the first round. Given the similar odds of the other receivers around him to lead the league in receiving, why not wait until the second round to take Keenan Allen and lock in your high-volume RB in the first?

Obviously, the fantasy value of RBs is hugely contingent on passing-game production as well, but two names concern me on this list: David Johnson and DeAndre Hopkins.

Combine Johnson’s leading rusher odds with the Cardinals' season win total in Vegas at just 5.5, and he could be looking at a lot of negative game script and fewer scoring opportunities under a new coaching staff. Could he thrive again coming off injury? Sure. However, remember that in the first round of fantasy drafts we’re looking for both a high floor and high ceiling.

Kareem Hunt has better leading rusher odds than many of the early-first-round fantasy options, and the Chiefs have a projected win total of 8.5. Dalvin Cook’s Vikings have a projected win total of 10. Leonard Fournette’s Jaguars are projected for nine wins, and Melvin Gordon’s Chargers for 9.5. These backs are projected for large amounts of positive game script. If I do not have an early-first-round pick, I’m locking in one of these backs in established offenses and grabbing Keenan Allen or Julio Jones in the second round.

Draft a High-Volume RB in an Established Offense

Many will find themselves towards the end of first rounds in 2018 looking at a draft board where Antonio Brown and DeAndre Hopkins are off the board.

For early-first-round drafters, there is some concern with David Johnson and Ezekiel Elliott, given the potential passing-game struggles in their respective offenses. These could be high-volume-but-inefficient runners. In this case, you should opt for the safety of an Antonio Brown, if available.

Below are running backs to target if drafting later in the first round, with the thought of taking receivers like Julio Jones, Odell Beckham, Keenan Allen, or Michael Thomas in the second round.

Note: I will not be going RB-RB in my 2018 drafts, because of the year-to-year volatility at the position. Only 5-of-18 high-end RB1s (RB1–RB6) repeated as top-12 RBs the following season over the past three years.

The suspension of Mark Ingram should add more early volume to Kamara’s workload, who is sure to see his efficiency regress from all-time great levels last season. More importantly, he’s in one of the best and most established offenses in the league that returns all five offensive linemen. The touchdown potential is absolutely there, as well, with Ingram second in the league behind only Todd Gurley with eight rushing touchdowns inside the 5-yard-line last season.

Gordon is entering his second year under rushing guru and head coach Anthony Lynn. Offensive coordinator Ken Whisenhunt is a staple now with the Chargers. With both tight ends from last season out of the picture, more targets could also funnel to Gordon, who was already fourth in the league in touches last season.

Fournette’s chronic ankle problems are a concern, as they led to poor efficiency numbers in the second half of last season. However, the volume is undeniable. He was third in the league in touches on a per game basis. Jacksonville also doubled down on its run game, signing high-priced free agent mauling guard Andrew Norwell. Fournette's floor is a bit lower than the above names mentioned due to his ankle concerns, but the ceiling is very high.

Put your quarterback rankings in a safe only a trusted friend has the combination to. Tell that friend he can only access your QB rankings for you at some undetermined point after the first round of your draft is complete. From there, find the RB or WR who has the best high-floor/high-ceiling combination, with an eye on backs and pass-catchers who play in established offenses.