You won’t find sleepers here. What you will find are values and, most of all, data to help avoid busts at or near the top of your fantasy draft.

Every fantasy draft season the names at the top of drafts are mostly those who performed best the previous season; however, in fantasy football, if our goal is to project forward, then why do so many managers blindly look backwards and put so much weight on the small sample size of the previous season?

We should be asking ourselves, “How often do the previous year’s top running backs and wide receivers repeat as such the following season?” That’s what I hoped to discover, specifically how many of the top-12 PPR RBs and WRs repeated as such.

I was not sure what the data would show. What I found was that it was a mixed bag over the past six fantasy seasons, a time period marked by a much larger emphasis on passing efficiency and broader use of spread offenses in the NFL. However, we saw a change in year-to-year consistency at one of the positions last year from the previous two seasons. 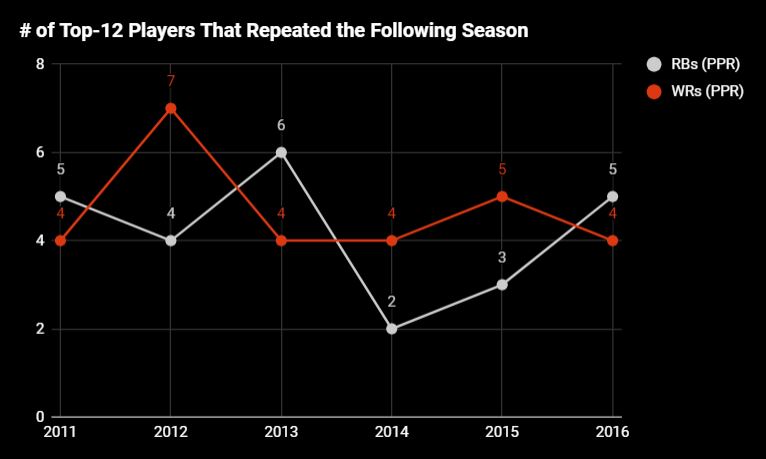 The number of RB1s who repeated top-12 PPR production at the position last season (Ezekiel Elliott, LeSean McCoy, Mark Ingram, LeVeon Bell, and Melvin Gordon) equaled the total that did so in the previous two seasons combined. What do these five RBs have in common? Elite volume. They each were in the top 12 at the position in touches per game. All but Ingram were also in the top 12 in touches per game in 2016. High volume equals high-floors and high-ceilings for running backs.

This data puts Leonard Fournette (third in RB touches per game) in prime position to repeat as a top-12 PPR RB, despite less use in the passing game.

The graph above also shows half of the RB1s and WR1s in any given year only repeated as such once in the past six seasons. Over the past three years, only 10 out of 36 RB1s repeated and only 13 out of 36 WR1s repeated.

So which players could emerge to become top-12 scorers at their respective position?

Wideouts who repeated as top-12 scoring PPR WRs last year were Antonio Brown, Julio Jones, Larry Fitzgerald, and Michael Thomas. Each ranked in the top 10 in targets per game. The first place to look for emerging top-12 WRs would be target-volume candidates. Outside of the obvious bounce back candidate like Odell Beckham Jr. and repeat candidate like Keenan Allen, Demaryius Thomas could re-emerge as a WR1 (12th in targets per game last year)—I go into more depth on why I like Thomas here. Josh Gordon is another candidate (13th in targets per game) because of his upgraded QB situation and likely negative second half game scripts.

If we break the top-12 PPR scoring leaders down further, what do we find out about their year-to-year consistency? Something more curious:

Only 25 percent of backs in the RB7-RB12 tier and wideouts in the WR7-WR12 tier repeated as such the following season over the past six years. Those 2017 RBs were: LeSean McCoy, Carlos Hyde, Leonard Fournette, Christian McCaffrey, Duke Johnson, and Ezekiel Elliott. The 2017 WRs were: Julio Jones, Tyreek Hill, Adam Theilen, A.J. Green, Marvin Jones, and Golden Tate. Considering many of these names have expensive ADPs, I prefer to avoid them (other than Fournette and Julio Jones for reasons mentioned above). Elliott still garners elite touches as well, but given this data, I’ve tended to select Antonio Brown over him in drafts.

I do have some concerns about only one back from the RB1-RB6 tier repeating as a top-12 RB in the two seasons prior to 2016. It also appears only one wideout from the WR1-WR6 tier repeating top-12 production from 2016-2017 could potentially be an outlier given their success in the five seasons before that.

Do we find any draft values from last year’s RB1-RB6 and WR1-WR6 tiers, given their superior success rate of repeating over the past six years when compared to low-end RB1s and low-end WR1s?

Each top-six RB from last year has a first-round ADP, with the exception of Mark Ingram. Ingram is suspended four games, but if you combine our projection of 178 PPR points for him divided by 12 games, you get 14.8 PPR points per game. Say you replace him with somebody like 11th-round pick James White for four weeks (projected 139 PPR points divided by 16 games equals 8.7 PPR points per game). And then combine White’s 8.7 FP/G for four weeks with Ingram’s 14.8 FP/G for 12 weeks and you get 212.8 composite PPR points. That amount of points puts an RB inside of our top 36 in value-based drafting (VBD). If you can get Ingram in the fourth round, it’s still a value, given these projections and the much higher success rate of repeating for high-end RB1s vs. low-end RB1s over the past six years.

Among the top six WRs from last year, four are being selected before the midway point of second rounds or sooner for obvious reasons: Antonio Brown, DeAndre Hopkins, Keenan Allen, and Michael Thomas. The other two high-end WR1s from last year were Jarvis Landry and Larry Fitzgerald—I detail here why the Landry fantasy party is over in Cleveland. I would not draft Landry at his fifth-round ADP. Fitzgerald at his fourth-round ADP? He’s a value with a projected VBD ranking in the top 30—and he's a good bet to repeat given his target volume. Those looking to wait on a WR1 until after the second round should keep Fitzgerald in mind.