Hopefully, your fantasy championship isn’t being decided in Week 17. It’s the cardinal sin of fantasy football to allow a championship to be decided in a week when so many relevant fantasy starters will be benched because their games are meaningless to the NFL postseason picture.

So, I wanted to use our last QB streaming column of 2017 to not just throw out some Week 17 streamer picks (in case you are in one of those leagues with championships this week) but to review the results of this strategy and look at QB scoring since 2011 to see if it reinforces what we believe to be true with the QB streaming strategy.

In the preseason, I looked at the median fantasy points scored of quarterbacks by tier: high QB1 (QB1-QB6), low QB1 (QB7-12) and QB2 (QB13-QB20). The goal was to see if the value of having an elite fantasy quarterback had increased, decreased or relatively stayed the same in recent seasons.

Adding 2017’s QB scoring results, this is what we find: 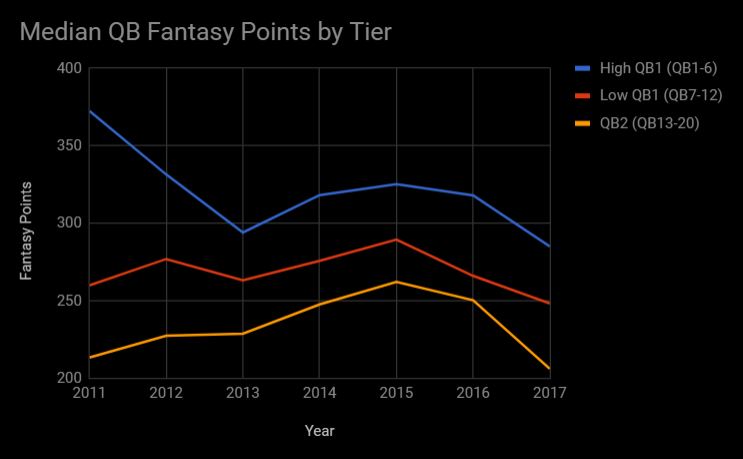 Across all tiers, QB fantasy scoring was the lowest it has been since 2011, and the High QB1s again came nowhere near the stratospheric results of the 2011 season, when it was worth using an early draft pick on this position.

For our purposes, all of this created perfect conditions to stream quarterbacks. The most owned players at QB scored the fewest points of any season this decade. That allowed the opportunity to exploit good matchups weekly among those players not owned in leagues.

Honestly, it’s just been an incredible season to use QB streaming as a strategy. Here were our results.

For the season, our top streaming picks averaged 23.9 fantasy points per game. That’s ahead of what DeShaun Watson averaged as QB1 in fantasy points per game and more overall points than Russell Wilson had as the top fantasy quarterback! The average of all of our streaming picks (16.9 FP/G) multiplied by 16 weeks is more than what Ben Roethlisberger scored as QB7 in total points.

Our standard for this exercise will always be to select only quarterbacks owned in 40 percent or fewer of Yahoo! leagues. We will use that standard as not to be accused of stretching the definition of “streamer” (plus, we like a challenge). It will also allow for similar potential on other sites.

We focus on factors such as QB points per game, the opponent’s schedule-adjusted fantasy points allowed to quarterbacks (aFPA), and the Vegas implied team totals.

We hope you enjoyed the picks this year and hope they brought you fantasy wins. Here are our final QB streamer picks for 2017 ahead of Week 17:

Apparently, the handsome devil is matchup proof. Everybody told you to stay away from the 49ers signal caller last week against the Jaguars defense, but Jimmy G looked like the QB he used to back up in New England. Jacksonville had allowed less than 10 fantasy points per game to quarterbacks, and then Garoppolo put up 22 on this ferocious defense. Stick with the gold and red hot hand. Garoppolo is averaging 18.7 fantasy points in his last three games. That’s what Tom Brady has averaged for the season. The Rams have also allowed about 16 fantasy points per game over the past four weeks.

Garoppolo is owned in 29% of Yahoo! leagues.