Notes: Touches for running backs are calculated by adding carries and targets. An asterisk (*) next to a player indicates that they were on bye in Week 6.

Lawrence led the Jaguars to the first win of his NFL career in London on Sunday. He was solid for fantasy in doing so, putting up over 300 yards and finishing as the QB14 on the week. Lawrence has put up a similar stat-line for three straight weeks now and looks like a dependable low-end QB1 to high-end QB2 moving forward. Treat him as a matchup-dependent streamer.

Wilson and the Jets were on a bye this week, so nothing has changed with Wilson’s fantasy value—he’s not worth a roster spot and should be left on the waiver wires.

Lance was also on a bye in Week 6. He’s dealing with an injury that has caused him to miss practice, and head coach Kyle Shanahan has openly said that Lance will go back to his role as backup quarterback once Jimmy Garoppolo returns from his injury. Because of this, Lance is simply a deep-bench stash that isn't startable in fantasy unless he wins the starting job for the 49ers.

Fields was decent for fantasy against the Packers this week, posting QB2 numbers in the Chicago loss. It doesn’t look like there’s much fantasy value in this Bears offense at all aside from the running back position, so Fields is better off on benches for fantasy.

I feel like I could copy and paste the same paragraph for Jones every week. He has looked like the best rookie on the field, but because of a complete zero in the running game and a lackluster Patriots offense as a whole, Jones is not worth a roster spot in fantasy.

Najee continued his streak of consistent fantasy dominance on Sunday Night, putting up over 20 fantasy points en route to a top-10 finish. He’s the overall RB5 on the season and has the 3rd most touches per game at the running back position. Continue to confidently start him at your RB1 spot week in and week out.

Javonte Williams is another player that has had basically the same fantasy outlook since Week 1. He’ll see enough volume to be FLEX-able in a pinch but likely won’t have a Najee Harris level of touches to be relied upon in fantasy. 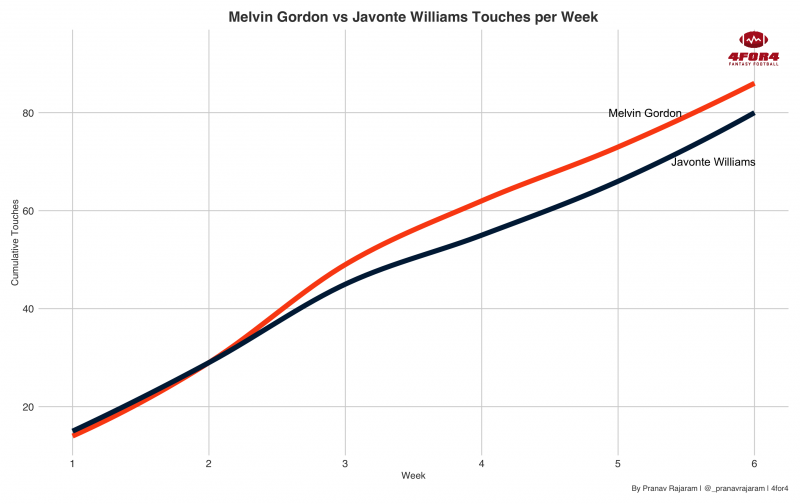 In this graph, we can see that Williams and Melvin Gordon have essentially had a 50/50 split in the Denver backfield, leading to Williams’ limited upside.

With the news that Christian McCaffrey will head to the IR and miss at least three weeks, Chuba becomes fantasy-relevant for the next month or so. He had a solid showing against the Vikings on Sunday, scoring a touchdown and having nearly 20 touches. As long as CMC remains out, Chuba should be a reliable RB2 and should definitely be picked up in leagues if he isn’t already rostered.

Herbert was the next man up in the Chicago backfield with David Montgomery injured and Damien Williams on the COVID list. He performed admirably as the starter, finishing as an RB1 on the week. With Montgomery out for at least the next week, Herbert should be picked up in fantasy leagues as he’s likely to see touches even if Williams returns.

Gainwell’s Week 4 explosion is looking more and more like an exception to the rule. The Eagles simply don’t run the ball much at all, and Jalen Hurts does not check it down to running backs enough. He’s droppable in most fantasy formats.

Chase continued to play Ja’Marvelously, posting almost 100 receiving yards in the Bengals’ overtime loss. He’s finished as a top-24 receiver almost every week this season and is the overall WR5(!) on the year. Start him confidently every week.

Smith had a disappointing performance last Thursday Night, essentially being shut out by the Buccaneers. However, while the Eagles' offense isn’t the most elite in the NFL, Smith is still the clear top receiver and will continue to see targets, especially after the Zach Ertz trade. He might not have the top-10 upside that others do, but the reigning Heisman Trophy winner is still a FLEX-able option.

I wrote last week that Waddle wouldn’t be fantasy-relevant until Tua Tagovailoa returned from injury. Tua played in last week’s game, and Waddle was amazing for fantasy. He scored twice and had 10 receptions, proving to be Tua’s safety blanket. As long as his former Alabama teammate is under center, Waddle is startable in fantasy, especially in PPR formats.

After a breakout performance in Week 5, Toney looked like he was on pace for another big fantasy day until his injury. On the first drive alone, Toney had three catches for 36 yards but left the game with an injury after that. It will be important to monitor his injury situation moving forward—4for4’s Adam Hutchinson listed his timetable to return as 1-4 weeks, so Sterling Shepard and Darius Slayton might see an uptick in volume in the coming weeks. However, if Toney comes back sooner than that, he’s a startable fantasy option, looking like the best player in the Giants crowded receiving corps.

Moore had yet another subpar fantasy performance this week, putting up a measly 16 receiving yards on just four targets. The Cardinals receiving room behind DeAndre Hopkins is a muddled mess, so Moore is droppable in most formats.

Pitts was on a bye this week, but should continue to be treated as an elite TE1 for fantasy that can be started for the rest of the season.