Running back values tend to be scoring-system dependent. And, from a qualitative perspective, they should. If targets factor into our ranks, a change in their value would filter down to the players. It’s not a seismic shift but critical to consider when comparing players.

I walked through my approach to the position in late April. But it was for FFPC drafts. Their full-PPR format pulled rushers with pass-catching upside forward with a resurgence in the position’s viability towards the end of the middle rounds. Underdog’s half-PPR setup may negate some of the thirst for running backs used in the passing game. I’ll break it down by each draft phase with data from our Underdog Advance Rate Explorer tool and find which profiles to target in your drafts.

The listed names aren’t a shock. They’re also not essential. Well, they’re non-essential to a degree. They change as situations evolve and talent rises or falls. But we can glean what’s required for teams to advance. A player’s skillset or the scenario behind their success frames our process for the following year. Also, their average draft position (ADP) can serve as a guide for balancing our roster. 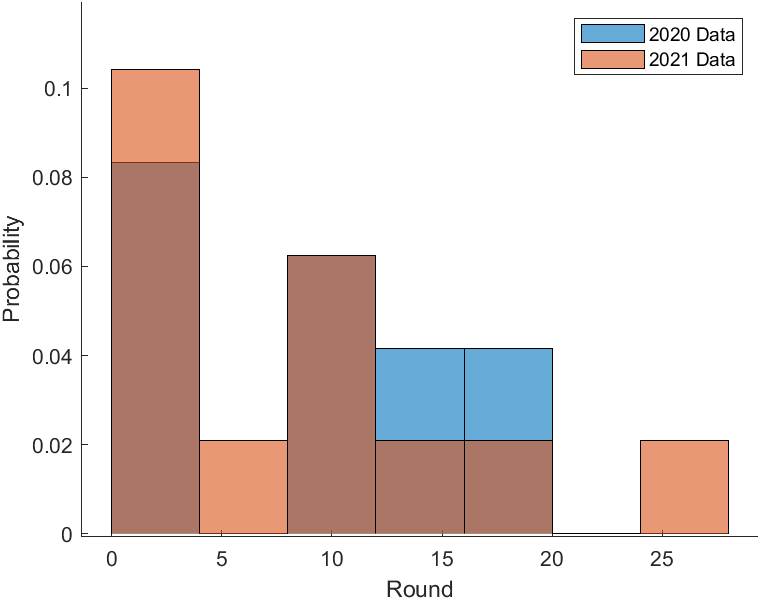 FFPC drafts taught us the early rounds have the highest probability of finding playoff-advancing rushers. Afterward, the back half of the middle phase was an area to target. But remember the difference in scoring settings between FFPC and Underdog. If it mattered, we’d see a market shift. Or, there’d be some indication other areas of the draft can be as viable. 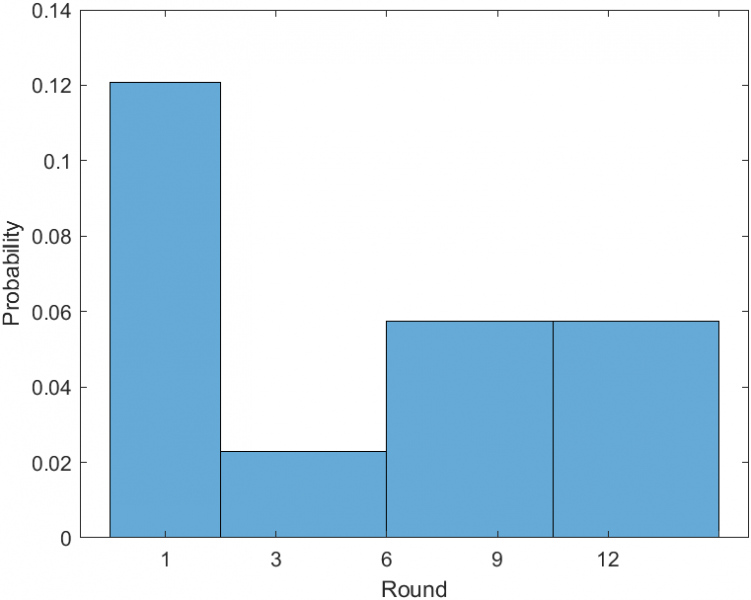 Nope. At a high level, the 0.5 PPR doesn’t change a thing. It shouldn’t. We’d see a single strategy or small set of strategies as the only way to build teams if it mattered. As a result, the similarity between the two platforms gives us roster construction flexibility. Targeting early-round rushers works. Hunting for upside through the middle and late parts of your draft also has value. But we have to zoom in on a few players once we’re on the clock. Let’s start with the early rounds to find out what profiles to search for before picking.

The ADPs give it away, but the early rounds are for the workhorse running backs. Outside of Javonte Williams, our targets were primary rushers on their respective team with involvement in the passing game. Austin Ekeler and Najee Harris led the way at 15.4% and 14.7% target shares. But Derrick Henry got by with only 20 targets last season. And we can all guess how he (and the others) secured their edge over the rest of their peers.

It’s not just the volume early-rounders earn, but where they earn it. And, for first and second-rounders, they got the money touches. We expect to see them on the field when their team is in scoring position. As a result, they pull away from the other running backs in fantasy production. 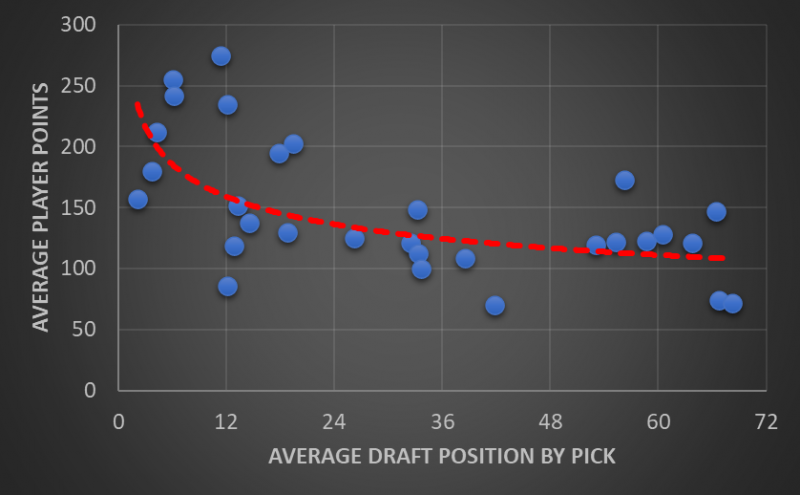 There are two takeaways from the above chart. First, there’s a 41.7-point gap between players drafted in the first and second rounds over the last two years. Accordingly, we should consider running backs with our first or second pick. Also, the rate of decline decreases as we get to the fifth round. Put another way, the opportunity cost of a fifth or sixth-round running back is similar. So, when faced with making a decision, considering another position is an option. It’ll be hard to find running backs with the same production profile so far into the draft as it is.

Seasonal points only tell me part of the story. I know the final data number, but not the array of scores summed together to get into the Top 12. So, I look at each week. And our early-round rushers need to have the overall RB1 in their range of outcomes. Running backs need to maximize their shots on goal without targets to buoy their point totals. It’s why red-zone touches are so important. Consequently, our early-round targets should have a high floor to sustain their value with a multi-week top-3 ceiling to help us advance.

A flaw in my draft strategy is avoiding mid-round running backs. Thirty-two wide receivers had an ADP between the seventh and twelfth round. I just highlighted how grabbing two top-12 passers can give you an edge. Subjectively, running backs take a backseat. It doesn’t mean we should forget the position exists. We just need to know when to pick our spots. 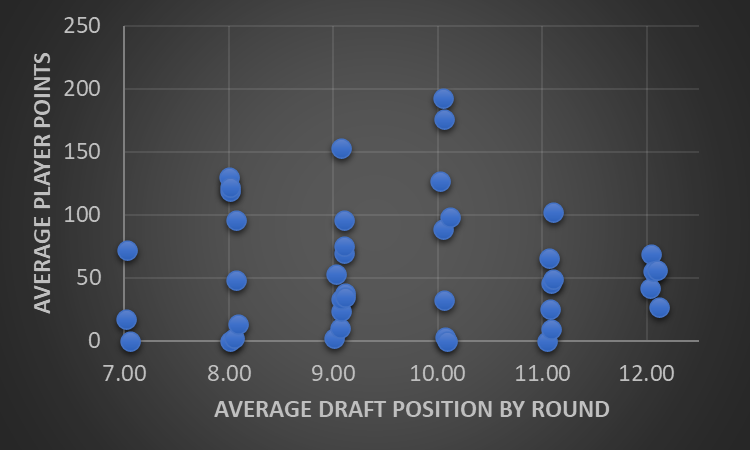 You can see a steady rise in average player points as we move past the seventh round. If I used ADP by pick again, this chart would be a jumbled mess. But, the solution isn’t as simple as waiting until then to revisit the position. It requires a little imagination on our part.

Leonard Fournette’s and James Conner’s 2021 season are the best examples to highlight. They’ve graduated to the early rounds this year, but it’s not how we projected their outlook for the prior season. Both were castaways from their previous franchises and placed on committees. The uncertainty (new team, limited role) kept their ADP down, but the chaos of an NFL season paved the way for an increased workload. And the same can be said about the rest of the players on the list.

I like to use ‘if-then’ statements when evaluating rushers in this phase. For example:

If running backs around my player go down, then he’ll see an uptick in usage.

If you can see such a script, you’ll have the right set of rushers to target. But they’ll also need standalone value. Melvin Gordon had Williams with him the entire season. And yet, he still produced. Targeting both traits, standalone plus ambiguous upside, will give you the floor you need and a chance to spike weeks throughout the year.

At this point, we’re rounding out our teams. TJ Hernandez’s piece on the anatomy of a final-round roster emphasized the use of five to six rushers to fill out your squad. So, ideally, we’ll need one or two players from this phase. Nevertheless, there’s an optimal approach.

Remember, it’s only two seasons of data. However, interestingly, there are no rookies in the playoff advance rate Top 12. The lack of opportunity cost invites a stab at our favorite prospect. On the other hand, we need players on the field as pass-catching specialists and RB2s litter the list. We can target the committee backs, but the same upside as the guys from the middle rounds isn’t a requirement.