NFL kickoff is still well over a month away but DraftKings has already released salaries for the Week 1 Main Slate. With the calendar not even turned to August yet, there are obviously a ton of unknowns when it comes to depth chart battles and potential injuries so no one should even think about lineup construction or top values just yet, but it is fun to glance at the slate and see what stands out. 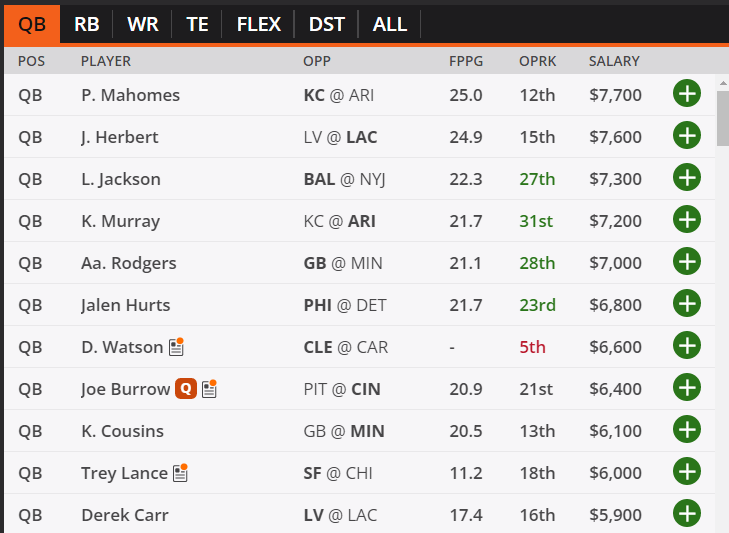 Although a lot will change between now and September 11, DraftKings Sportsbook has already released initial Week 1 betting lines. The two games that will be heavily targeted in tournaments are the Chiefs at Cardinals and Raiders at Chargers. Both have implied totals well over 50 with spreads below four points.

Three of the quarterbacks featured in these games are ranked in the top four quarterbacks on the slate by salary, but Derek Carr ($5,900) is one of just three signal-callers on a team with an implied total above 24 points and a salary under $6,000. The other two are Ryan Tannehill ($5,700) and Matt Ryan ($5,500). Redraft and best ball players are optimistic about a 2022 breakout for 49ers quarterback Trey Lance. There is an immediate opportunity to take advantage of that potential breakout with Lance carrying a salary of just $6,000 as a big favorite against the Bears. 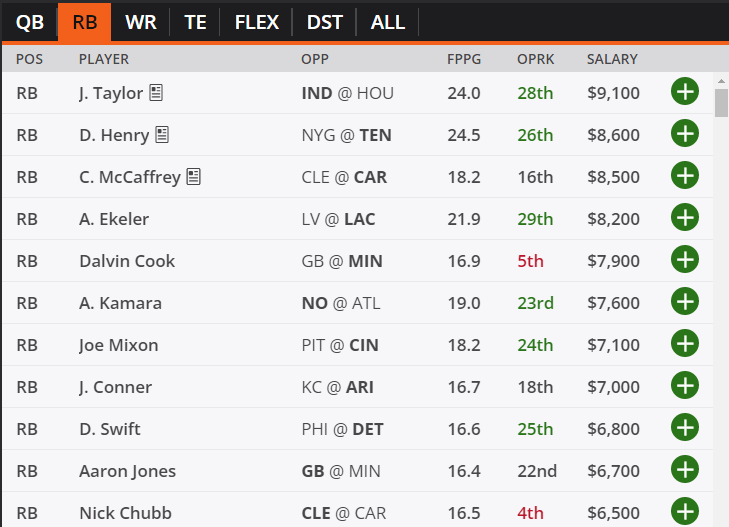 Early betting lines have the Colts as the biggest favorite of the week, so expect plenty of DFS players to try to jam in Jonathan Taylor ($9,100), who carries the highest salary at his position. Dropping just two spots down in the salary ranks, Christian McCaffrey ($8,500) is a value at this salary regardless of matchup. When McCaffrey is right, he’s a $10,000 player, so this is potentially the cheapest you will be able to roster him all season.

One of the biggest headlines leading up to Week 1 is Alvin Kamara’s likely suspension. If the NFL does lay down the hammer before the season starts, Mark Ingram ($5,900) will be one of the most popular players on the slate as a 4.5-point favorite against the Falcons. Other potential Week 1 starters on teams favored by at least a field goal include Antonio Gibson ($5,800), J.K. Dobbins ($5,600), Clyde Edwards-Helaire ($5,400), Miles Sanders ($5,400), and Elijah Mitchell ($5,400). 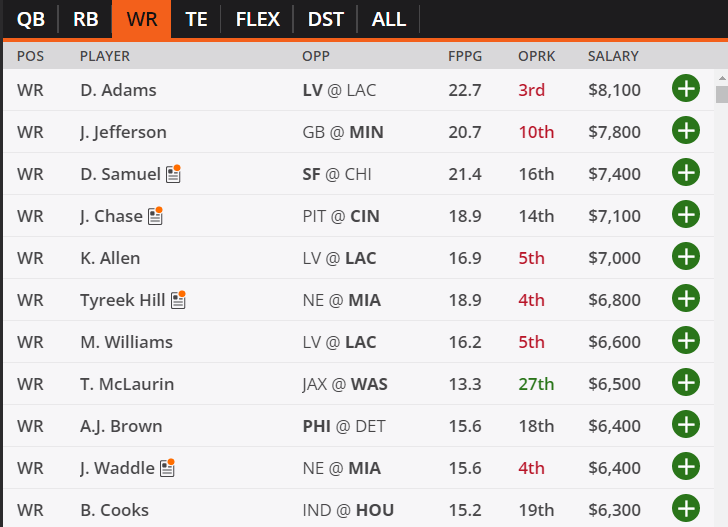 Looking at the potential shootouts mentioned in the quarterback section, the two wide receivers who stand out are Mike Williams ($6,600) and Marquise Brown ($6,200). Williams could easily lead the Chargers in targets but is priced $400 below his teammate, Keenan Allen, while Brown will be Kyler Murray’s go-to target with DeAndre Hopkins suspended. Eleven receivers have a higher Week 1 salary than Brown, though.

Anyone who can figure out which Chiefs wide receiver is worth rostering could reap massive rewards—JuJu Smith-Schuster ($5,200) carries the highest salary of the group while Skyy Moore ($3,800) is bringing up the rear with a sub-$4,000 salary.

Two players who should have a stranglehold on their team’s target share all season that come into Week 1 as heavy underdogs are Brandin Cooks ($6,300) and Darnell Mooney ($5,700). Both could be exciting bring-back plays in game stacks.

It’s always interesting to see where rookie salaries will land and aside from the aforementioned Moore, the two sub-$5,000 first-year receivers who stand out are Garrett Wilson ($4,700) and Chris Olave ($4,500). 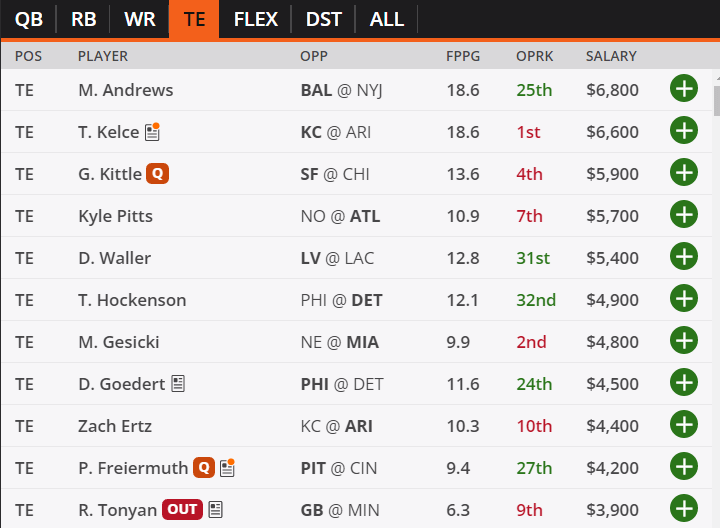 The tight end position is top-heavy as always but there’s an immediate leverage opportunity wIth Zach Ertz ($4,400) if Travis Kelce ($6,600) ends up drawing heavy ownership.

Austin Hooper ($3,700) and Mo Alie-Cox ($3,400) are both on teams with a lot of questions about who will be catching the ball and have the potential to be favored by their respective veteran quarterbacks. In Week 1, both the Titans and Colts are heavy favorites which will result in their running backs drawing high ownership. There are worse tournament plays than punting at tight end for leverage. 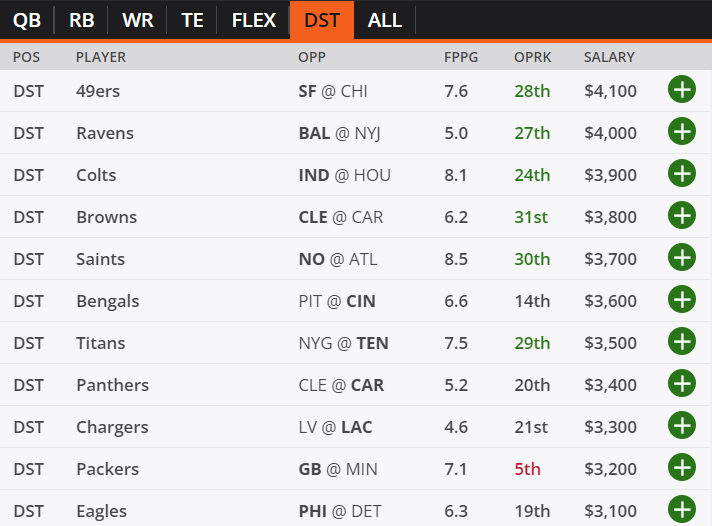 Among the big favorites, the Titans ($3,500) are giving 6.5 points at home but are $400 less than any other team favored by at least six points and $600 less than the highest-salary defense.