Note: Fantasy Points are in a half-PPR scoring format.

Yikes. This was not a good week for the rookie quarterbacks, to say the least. Lawrence, Wilson, Fields, and Jones all struggled mightily in losses, with all of them finishing outside the top-20 quarterbacks on the week. It speaks volumes that Trey Lance, who was in for just one play for the 49ers, finished higher than two of the rookie QBs this week.

Through three weeks, Lawrence has looked nothing like the generational prospect he was touted as coming out of college. He’s tied for the most interceptions thrown in the league (7) and hasn’t eclipsed 20 fantasy points once despite two relatively easy matchups versus the Texans and Cardinals. He should be on your bench in almost all fantasy formats and will have to prove that he can be a reliable starter in the next few weeks.

Wilson has looked awful through his first three games and is tied with Lawrence for the most interceptions thrown on the year. He’s yet to cross 300 passing yards in a game and has only thrown two touchdowns. The Jets offense is quite frankly horrible (bottom-3 in yards per game, last in points per game), so Wilson isn’t anywhere close to fantasy relevant. Leave him on the waiver wire.

Trey Lance was once again teased on Sunday night, running in a 6-yard touchdown to close the first half of the Packers-49ers game. However, for the time being, it looks like Jimmy Garroppolo will be the starter under center in San Francisco, so Lance can’t be started in fantasy. He is worth a bench stash though—If Lance does supplant Jimmy G at some point in the year, his dual-threat upside and strong supporting cast make him an enticing option.

Justin Fields wins the award for most disappointing fantasy player this week. After Andy Dalton’s knee injury, Fields was named the starter for Chicago, and fans were excited to see the talent that made him the 11th overall pick in the NFL Draft. However, Fields was pummeled by the Cleveland Browns defense, throwing for just 68 yards and being sacked a whopping 9 times. Bears coach Matt Nagy has already said that the starter for Week 4 will be an open competition between Dalton, Fields, and Nick Foles, and Fields has done nothing to prove he should win that job. Keep him on your bench for the time being.

Despite throwing three interceptions and having just 11.6 fantasy points, Patriots rookie Mac Jones actually finished with the most points among the rookie QBs. He likely would have had a slightly better fantasy day if not for two unlucky interceptions—one of them a pass bouncing right off of Jonnu Smith’s hands and into a Saints defender and the other coming in garbage time—but the lack of upside is glaring. The Patriots’ offense is likely not good enough for Jones to be relevant for fantasy.

Najee was fantastic for fantasy football this week, in large part due to a 19 target, 102-yard performance through the air. He remains rather ineffective on the ground (just 3.08 yards per carry so far), but the passing volume he received is quite encouraging. While it might seem unrealistic for Najee to get so many targets per week, fantasy managers can certainly expect a decent amount of volume through the air moving forward—Steelers QB Ben Roethlisberger looks washed on the football field, and will have to rely on Najee as a check-down option. Continue to start Najee with confidence week in and week out. 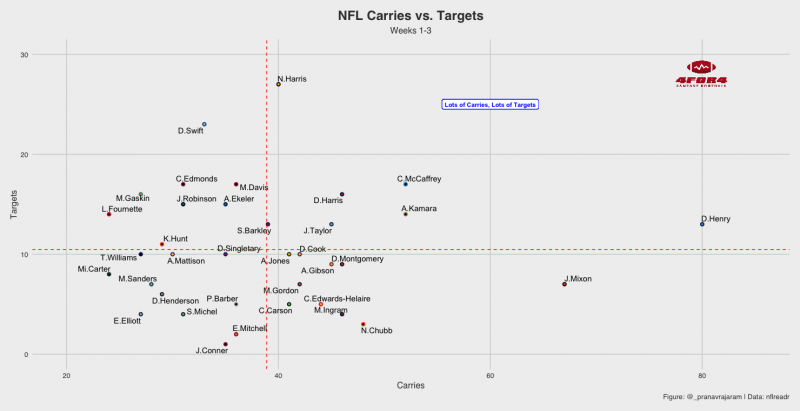 This graph simply reinforces the elite level of passing volume that Najee Harris has seen so far this season.

Javonte Williams has played exactly like expected to start the season. He has seen a decent amount of touches through the first three weeks but isn’t receiving a bell-cow running back type volume. For the time being, he’s a FLEX-able player that will likely be a bit touchdown-dependent as he’ll probably only see about 40% of the snaps out of the backfield. With this being said, if he manages to win the starting running back role from Melvin Gordon as the season progresses, he could become a reliable fantasy starter.

With undrafted rookie Elijah Mitchell ruled out this past week, Trey Sermon was given the start at running back for the 49ers. However, this translated to just 10 carries for 31 yards, as fullback Kyle Juszczyk was on the field more than Sermon (69% of snaps versus 59%). Sermon fell into the end zone to salvage his fantasy day for those who started him, but he didn’t look very good running the ball. He should be on your bench for fantasy until we get a clearer picture of what is going on in the San Francisco backfield.

Like I mentioned before, the Jets offense is simply not good, which means there is very little room for fantasy excellence. Carter has been unspectacular as part of the Jets three-headed “monster” at running back, and can safely be dropped in most fantasy leagues.

Chase has overcome his preseason demons and has looked spectacular through the first three weeks of the NFL season. He has made the most of his 5.3 targets per game, racking up four receiving touchdowns, good for 2nd in the entire league. It would be nice if he were to see a bit more targets (especially if Tee Higgins misses more time or is limited with his injury), but Chase has a clear rapport with Joe Burrow and can be confidently started in fantasy.

After having a strong NFL debut, Eagles wide receiver DeVonta Smith has cooled off rapidly in the past two weeks—After a 2 catch, 16-yard stinker in Week 2, Smith was 3rd on the team in targets Monday night and finished with just 28 receiving yards. Fantasy managers should definitely still be rostering him, but he doesn't look to be a dependable fantasy starter at the moment.

Jaylen Waddle was solid in PPR and Half-PPR formats this week due to the manufactured touches he saw. He had 12 receptions for just 58 yards. and looked like Jacoby Brissett’s safety blanket during the game. He’ll continue to have a high floor for fantasy moving forward, and is a FLEX-able player.

After setting the fantasy world on fire in Week 2, Cardinals rookie Rondale Moore was a huge disappointment in Week 3. He was on the field just 34% of the time and had a measly 2 receptions on the day. Moore might be safer on your bench in fantasy until he sees the field more, and currently has the makings of a very boom-or-bust player.

I really do apologize to Jets fans reading this article, but once again, the Jets offense isn’t good enough to support relevant fantasy players. Moore is droppable in essentially all fantasy formats.

Kyle Pitts has been one of the bigger let-downs of the NFL season thus far. He hasn’t lived up to his hype, looking like just another tight end for fantasy. Fantasy managers shouldn’t press the panic button yet, as rookie tight ends usually take some time to adjust to the NFL, but owners of Pitts should certainly proceed with caution. He’s still a startable tight end, as the position continues to be a wasteland for the most part.

Steelers 2nd round pick Pat Freiermuth got into the end zone for the first time in his career, which was enough to make him the TE10 on the week. Freiermuth is a matchup-dependent streaming candidate moving forward and should be able to fill in for a starter in a pinch.