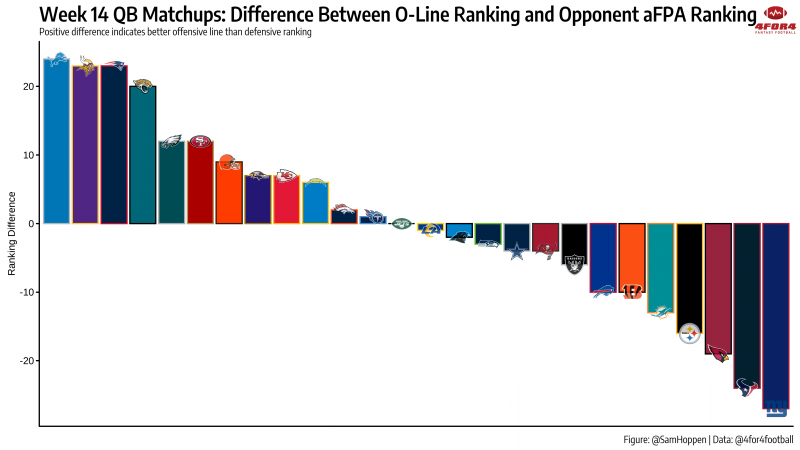 The Minnesota Vikings have two legitimately great edge rushers in Za’Darius Smith and Danielle Hunter, but their secondary has so many holes that it’s almost a moot point. Allowing a league-high 8.1 yards per attempt, the Vikings defense is the only group in the NFL currently allowing over 300 yards through the air per game, a weakness that was just exploited by Mike White, who ate up 369 yards through the air last week. No offense to White, but the Lions should be even more well-equipped to take advantage, particularly if Jameson Williams is able to ramp up his in-game action after his season debut saw him run only two routes.

Even though Detroit has dealt with their fair share of injuries along the interior of their offensive line, they have kept Jared Goff upright, earning the second-best adjusted sack rate (4.4%) in the NFL, thanks in large part to tackles Taylor Decker and Penei Sewell putting together consistent performances. Goff has a great opportunity to eclipse the 300-yard mark for the fourth time this season in Week 14, which would make fantasy-viable days for Amon-Ra St. Brown and D.J. Chark as a WR1 and a WR3, respectively.

This matchup plays into the hands of the Jaguars' offense, which is much more proficient through the air than it is on the ground. Jacksonville allows pressure at the sixth-lowest rate in the league but ranks 27th in adjusted line yards, resulting in 23.9% (29th in the NFL) of their runs going for zero or fewer yards. On the flip side, the Titans have been the epitome of a pass-funnel defense, ranking fifth in aFPA to the running back position but 28th, 31st, and 25th to quarterbacks, wide receivers, and tight ends, respectively. The blueprint is out on Tennessee, as opposing offenses have the highest pass play% and pass rate over expectation while playing the Titans, and we can expect more of that from the Jaguars on Sunday.

A pass-heavy attack will benefit a select few players on Jacksonville’s narrow passing tree. Per this week’s Hoppen to Conclusions, Zay Jones leads the team with a 28.8% target share since Week 10, with Christian Kirk close behind at 26.1%; no other player on the team has a target share over 11%. Assuming similar usage here in Week 14, both Jones and Kirk are worthy of starting in your lineup as a WR2, each with the upside for a WR1 finish or the downside of a WR3 finish. Evan Engram, coming off his fourth seven-plus target game of the season, is worthy of streaming unless you are somehow confident with whatever tight end you’re currently holding on to.

Injuries are adding up at the worst possible time for the Baltimore Ravens’ playoff seeding, but help may be on the way in the form of All-Pro left tackle, Ronnie Stanley. Stanley was trending in the right direction last week after limited practices on Wednesday and Thursday but was ultimately held out of his sixth game of the season. Getting him back for this matchup would be an immense help for the team, as Tyler Huntley will surely operate better if the likes of Alex Highsmith and T.J. Watt aren’t on top of him for the majority of the game.

Whether it’s simply a small sample size or Watt is still working himself back into form, he hasn’t been quite the same since returning from injury in Week 10, accounting for eight pressures and one sack over these past four games. The Steelers as a whole currently rank 28th in pressure%, and as a result, they’re being thrown on with ease, ranking 30th in explosive pass% and 29th in passing yards allowed per game. While no one can match Lamar Jackson’s athleticism on the field, Huntley has the juice to put forth a fringe QB1/2 week, while Devin Duvernay and/or Demarcus Robinson make for boom-or-bust options for the risky and desperate.

Kyler Murray and the Cardinals come out of their bye week looking to salvage a lost season that is probably best described by the quarterback’s sideline bickering with Kliff Kingsbury. There is likely to be plenty of bickering fuel provided by the Patriots' pass rush that ranks third in pressure% (38.1%) and fourth in adjusted sack rate (9.3%), all the while limiting oppossing quarterbacks to the fourth-lowest passing EPA per play. Though Murray can likely still get there with his legs, Week 14 could be a grind for his skill position players, as he has performed as possibly the worst quarterback in the league when he has had to face pressure. While operating in a muddied pocket, Murray ranks 33rd (out of 33 qualifying quarterbacks) in yards per attempt, 32nd in on-target%, and 32nd in completion%. Only Zach Wilson ranks lower than him in those latter two categories.

While you can’t possibly bench DeAndre Hopkins, his ceiling should be relatively capped this week, while Marquise Brown should be considered more of a WR3/Flex play in a game where Kyler Murray could be running for his life.

It doesn’t get much more straightforward than this matchup, as a Texans offensive line that has been reeling for years now travels to Dallas to take on a Cowboys pass rush that ranks first in the league in pressure% (40.4%). Laremy Tunsil had an impressive Week 13 against Myles Garrett, but the Cowboys are very likely to opt to stick Micah Parsons over on the other side of the line to torment right tackle Tytus Howard, leaving Demarcus Lawrence to work on Tunsil.

No matter what configuration they go with, the Cowboys should be considered the best D/ST play on the week, while Kyle Allen shouldn’t be touching any fantasy lineups, regardless of format. 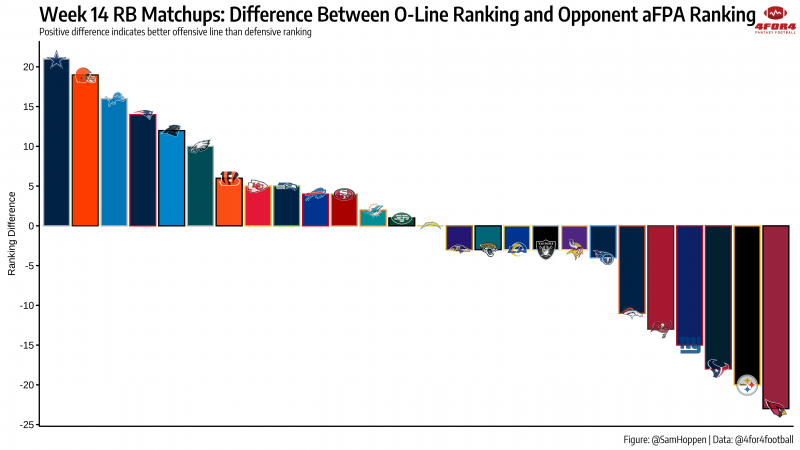 During what has been a strange season in Carolina, one positive takeaway has been how strong their run game can be when they can get it going. As a team, the Panthers have run for 145+ yards on six occasions, including their most recent game, when D’Onta Foreman and Chuba Hubbard combined for 178 yards against the equally-awful Broncos. They would only ask Sam Darnold to drop back 20 times, as they ended up with the lowest pass rate over expectation on the week. There’s no reason to assume they will switch up their gameplan in Week 14, as the Seahawks have allowed the second-most rushing yards and third-most rushing scores on the season, ranking 31st in schedule-adjusted fantasy points allowed to the running back position.

Assuming D’Onta Foreman is good to go for Week 14 —and he claims he is— he should be slated into an RB2 role for fantasy, while Hubbard makes for a low-ceiling Flex play.

The Bengals' offensive line is slowly developing into a strength of their team, which is surprising considering how long they were one of the worst units in the NFL. In this particular matchup, it almost doesn’t matter what offensive line is being rolled out there, though, as the Browns' run defense has been miserable all season long. Cleveland ranks 30th in defensive adjusted line yards (4.93) and in turn, has allowed the fifth-highest explosive rush%, the second-most rushing EPA per play, and also ranks dead last in schedule-adjusted fantasy points allowed to RBs.

With no new news on Joe Mixon (concussion protocol), Samaje Perine is a no-brainer top-five running back option for Week 14. Even if Mixon is eventually cleared by Sunday, you could honestly just play both of them as RB2s and soak up all of the fantasy goodness in this cushy matchup.