Welcome to the very first run of the new Receiver Breakout Model for 2021. This year, the 4for4 data science team, in conjunction with our award-winning projections expert John Paulsen, have recalibrated and reconfigured the receiver "buy-low" model from years past in order to better identify under-performing wide receivers and tight ends who might be on the verge of a breakout performance. For the uninitiated, the breakout receiver model utilizes historical data and recent player performance to help determine players who have received opportunity that is typically more valuable than their recent production would indicate. This particular model's features include air yards and routes-run data as a means of determining opportunity. It also utilizes a proprietary efficiency metric that looks back at the past 10 weeks of individual player performance, all to better help predict the likelihood of a bounce-back in a player's future production. The model heavily-weights the last three weeks of data, making Week 4 the perfect time to debut the model for 2021.

One thing to note: the model doesn't have special caveats for changes in personnel, schemes, or situations. Take these results with a healthy grain of salt, and contextualize the numbers with what you know to be true about a player's situation going forward. Remember that the model doesn't explain why a player is under-performing, it can't tell the difference between bad luck and poor play, and as we know, when a player under-performs their expectations it's often a mix of both. This article will only feature players whose results have been below expectation. When we tested the model last season, we found that the under-performing cohort scored, on average, 89% of their expected fantasy points the following week, a solid indicator of the model's proper calibration as it begins to take in data from this season.

In future versions of this article, we'll take some time to examine the model's hits and misses from the week prior. For now, let's get into the model's recommendation for the week ahead. 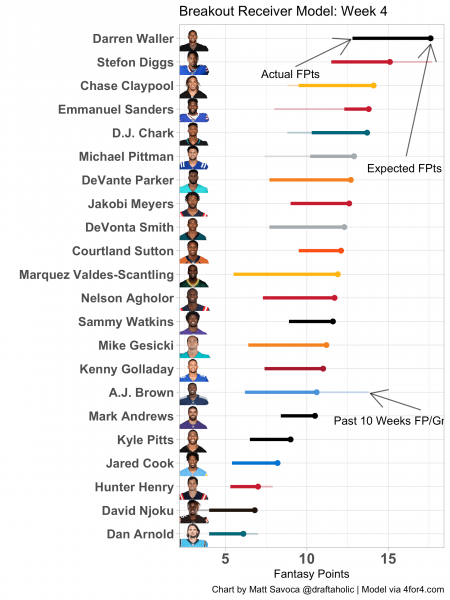 After reviewing the model's recommendations, here are the players who are catching my eye for Week 4.