The Breakout Receiver Model returns for Week 17. We had a third-straight 30%-plus hit rate week in Week 16, and players in the model, on average, scored a solid 70% of their expected fantasy points. And while that’s not quite as strong as Weeks 15 and 16, the model remains quite reliable as the season concludes, even as teams’ overall objectives begin to diverge. Let’s touch on some hits and misses from last week, and then dig into the week ahead.

Last week’s model was confident the Bills’ Stefon Diggs had massive ceiling potential even while facing the Patriots, the number one defense via schedule-adjusted fantasy points allowed (aFPA) to opposing offenses. DeVonta Smith finished with five receptions and a score, while Ja’Marr Chase caught seven of his ten targets for 125 yards against the injury-riddled Ravens. Marvin Jones was the only other breakout candidate with double-digit fantasy points, his 13 targets and eight receptions were the most he’s had all season.

Rob Gronkowski certainly stands out as a massive whiff in last week’s model. In a plus-matchup against the Carolina Panthers, Gronkowski was essentially a non-factor, while the running backs and Antonio Brown did most of the Buccaneers’ damage offensively. He and Donovan Peoples-Jones are the only two players from last week to under-perform expectations by more than ten fantasy points. While Kenny Golladay and Darius Slayton’s forgetful Week 16s are to be expected with the Giants’ quarterback issues, Mike Gesicki has no excuse to be under-performing his dozen-fantasy point expectation. Gesicki has been overshadowed by Jaylen Waddle nearly every time the two are on the field together this season.

Note: Click the image to view the visualization in full resolution. 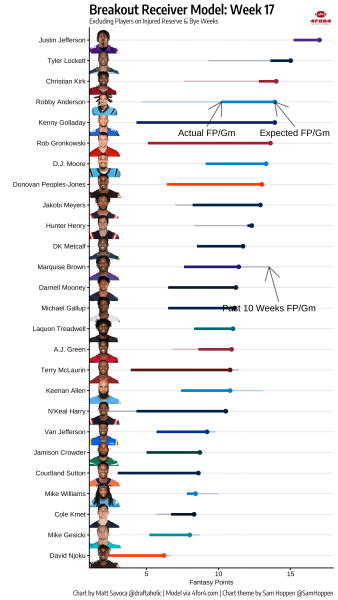