I've spent many offseasons here at 4for4 examining play-callers on new teams and how they impact fantasy football. Through that process, there has been one major recurring theme—the best players command the most touches and most coaches are at least somewhat fluid in their tendencies, especially when it comes to player usage. Like anything, there will be outliers—Greg Roman is going to run and Sean Payton is going to throw. Most coaches fall somewhere in the middle.

Rather than focusing on player-specific trends, this study will offer a historical, zoomed-out view of all the current play-callers in the league, dating back to the 2006 season. This will allow us to compare tendencies side by side while focusing on the parts of the game where these decision-makers have the greatest impact.

Throughout this analysis, I will note relevant trends of play-callers on new teams as well as which coaches stand out overall in each category. For certain stats, I focused on where a coach ranked in the category rather than the actual rate or raw number. The reason for this is to keep everything in context. Andy Reid, for example, threw 59.1% of the time in neutral game script in 2006, the third-highest rate in the league at the time—in 2019, that rate would have ranked 20th.

Also, note that I did my best to select only those seasons where a coach was actually the play-caller. Jason Garrett, for instance, delegated play-calling duties in multiple seasons as the head coach of the Cowboys.

After covering each topic for coaches who have play-calling experience at the NFL level, I will highlight any major takeaways for play-callers who will be on the headset for the first time in their career.

Before we get into it, let’s take a look at the current play-callers across the league. Coaches marked with an asterisk are new to their team but have play-calling experience at the NFL level. Coaches with two asterisks will be calling plays for the first time in the pros.

One of the first questions asked about play-callers in the NFL is whether they favor the pass or the run. While this question is often well-intentioned, the answer can be deceptive if game script isn’t taken into account. Consider the 2019 Chiefs—Kansas City threw 62.5% of the time last year, the 11th-highest rate in the NFL. If we consider neutral game script (when the game is within 7 points), the Chiefs' 66.4% pass rate was the highest rate in the league.

By looking at neutral play splits, we can get an idea of how a play-caller truly wants to run their offense. 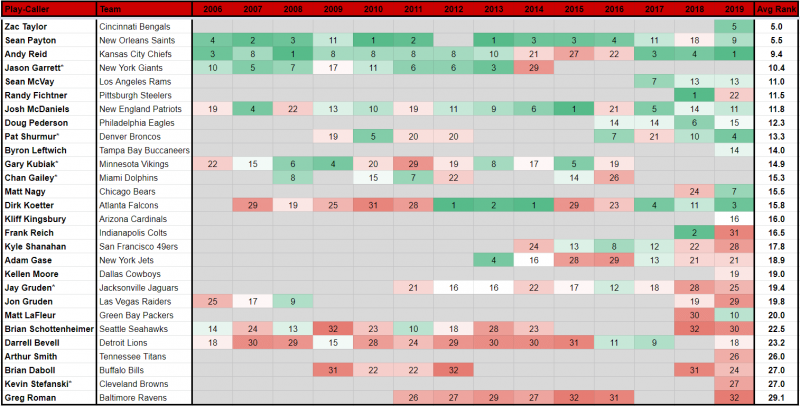 Like touch or target volume, how often a team throws deep (15+ yards downfield) is often dependent on the roster—remember that air yards are a receiver stat— but some coaches have a clear affinity for the deep ball. This is especially important for fantasy purposes—while deep passes have proven to be the most efficient types of passes for fantasy, they also lead to more scoring volatility. Maybe more so than any of the trends in this article, this is where it’s most important to consider the coaches on the extreme ends of the spectrum. 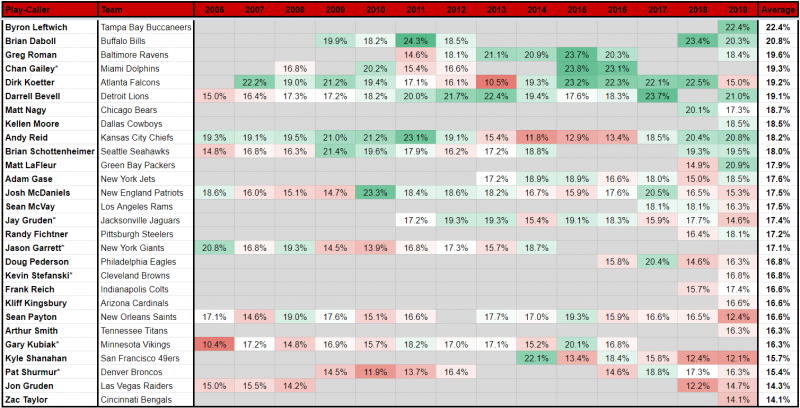 Offensive pace may be one of the most underrated aspects in projecting football outcomes, especially when it comes to play-callers. What we are interested in is situation-neutral pace, as defined by Football Outsiders. According to FO, “The intent is to describe pace as dictated by each team's game plan or style of play, not pace that is situation-induced.” Like any data point, pace is just one piece to the puzzle but a dominant offense rarely has a slow neutral pace.

Over the last five seasons, teams that finished in the top five in scoring had an average rank of 12th in neutral pace—only four top-five scoring offenses finished in the bottom 10 in pace. Beyond projecting offenses for an entire season, there are game-level implications with pace stats. There have been 25 matchups in the last five years between teams that finished the season ranked in the top five in neutral pace and 16 of those games (64%) hit the over.

Similar to what we saw with neutral passing rates, where play-callers rank in situation-neutral pace can indicate their intentions for how they will run their offenses. 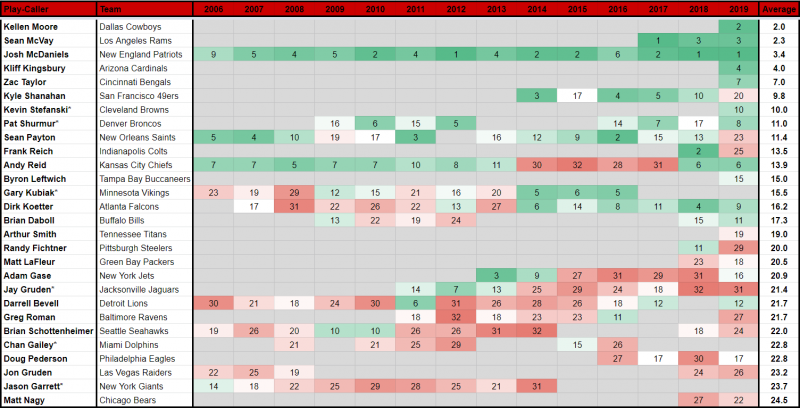 There are four teams that will have new offensive play-callers with no experience at the NFL level but there can still be some insight to be had by looking at their previous jobs. Of course, coaches don’t always follow suit. Often, simply looking at a team’s trends from the previous season is the best predictor of tendencies for these new coaches. The following will take a brief look at each situation.

Joe Brady was a disciple under Sean Payton for two years before serving as the passing game coordinator for the National Champion LSU Tigers in 2019. That offense produced Heisman Winner and No. 1 overall pick Joe Burrow, who led the nation in passing yards and touchdowns. The Tigers also produced two receivers—Ja'Marr Chase and Justin Jefferson—that finished in the top three in receiving yards in the country, as well as one of the best pass-catching backs in college. Clyde Edwards-Helaire was the only running back chosen in the first round of the 2020 NFL Draft.

It isn't hard to draw parallels between Brady's offense in Baton Rouge and the unit he inherits in Carolina. Obviously, there will be some limitations with Teddy Bridgewater under center, but the Panthers have the most versatile running back in the league, two receivers who can stretch the field and a top-10 talent in D.J. Moore. If we exclude 2019, Carolina ranked in the top half of the league in neutral passing rate just twice in the Cam Newton era—they jumped to eighth last season. With Brady in town, Teddy Two-Gloves could lead a sneaky-good passing attack.

The Panthers started cleaning house after 12 games last year, replacing Ron Rivera and Norv Turner with Perry Fewell and Scott Turner for the final quarter of the season. With Scott taking over play-calling for Norv, Carolina's neutral passing rate jumped from 62.1% to 64.7%—the latter would have ranked third in the league over the entire season.

Rivera was hired as the head coach in Washington and brought Scott Turner along. For Turner to bring the pass-heavy philosophy he used late last year to the nation's capital, there will have to be major changes. Dan Snyder's team ranked 25th in neutral passing rate in 2019 and only four teams threw deep at a lower rate—the Panthers finished in the top half of the league in deep-ball rate. After Terry McLaurin, there aren't many exciting options for Dwayne Haskins to throw to, especially after Kelvin Harmon tore his ACL. Steven Sims did flash late last season and Antonio Gibson is a versatile running back that Rivera has already compared to CMC.

All of this may be a moot point if the football team from Dave Chapelle's hometown is as bad as expected—only one team has a lower win total according to DraftKings Sportsbook. Game script could force the team in FedEx Field to be one of the more pass-heavy units in football.

Shane Steichen has spent his last nine years coaching for the Chargers, save a one-year stint in Cleveland, but this offense will surely look different than the unit led by Ken Whisenhunt last year. Even more notable than the change at OC is the one at quarterback. At least to start the season, Tyrod Taylor will be under center, a stark contrast from the statue that is Philip Rivers. Los Angeles ranked 13th in neutral passing rate last season and last in neutral pace. Taylor's last three offenses in Buffalo all ranked in the bottom two in neutral passing rate with ranks of 14, 23, and 11 in pace. His mobility is a major factor in those passing numbers and will impact how Steichen manages this offense.

This may be the least impactful of the coaching changes in 2020 as Tim Kelly as been in Houston since 2014 and will still work alongside Bill O'Brien, who called plays throughout Kelly's tenure. Here is how the Texans have ranked under O'Brien in the categories discussed in this article:

Studies
11 ADP Risers and Fallers at the Start of September