The Value of Targets in Fantasy Football by Distance/Direction

The NFL is behind the curve when it comes to analytics—this, we know. The NBA's Golden State Warriors won the championship last season -- then set the all-time wins record this season -- behind an analytics-based approach rooted in the fact that shooting from a slightly different location could produce a 43 percent greater ROI. The team the Warriors met in the Western Conference Finals in 2015, the Houston Rockets, had previously used analytics to discover that NBA teams should only be taking two types of shots: 3-pointers and shots at the rim.

Meanwhile, not much data exists on how throwing to different locations on the field effects the efficiency of NFL passing plays. In fact, a Google search for "most efficient NFL pass location" provided no results of substance on the topic.

Pro-Football-Reference (PFR) has tracked pass location data going back to 2006. The data is somewhat limited in terms of pass distance, breaking up passes into only short (less than 15 yards beyond the line of scrimmage) and deep (15 yards or more beyond the LOS), but does separate passes by left, middle, and right. All in all, we can track six different pass locations using PFR. Using the 10 years of available data, we can begin to answer the question of how passing to various locations on the field effects passing efficiency, and more importantly for us, fantasy efficiency.

First let's look at the raw passing stats when teams throw to each of the six field locations. There are many ways to measure passing efficiency, but all data is ordered by adjusted yards per attempt.

Before proceeding, there are a couple of important things to note.

Firstly, just because deep targets are more efficient in terms of yardage gained doesn't mean teams should necessarily be throwing more deep passes. Because the data includes only plays where a pass was thrown, there is no way to account for the fact that deep passes take longer to develop and therefore lead to the increased likelihood of a sack occurring.1

Secondly, the aforementioned data scarcity in terms of pass distance -- particularly in terms of precise target depth—limits the conclusions we can draw. For instance, it's likely that the disparity in yards/attempt and yards/completion on short passes to the middle versus those to the left and right is due to screen passes being thrown closer to the line of scrimmage occurring far more on the sides of the field than on the middle, where short passes are more likely to be slant and drag routes caught farther upfield.

That said, there appears to be a clear benefit to having receivers who can operate in the middle of the field, as evidenced by the fact that passes to the middle are significantly more effective in terms of A/YA at both distances. But despite being the most efficient, they're thrown the least of the three directions at each of their respective distances -- not every team has WRs who can handle going over the middle consistently, nor does every team have a talented receiving TE.

Here is a table of passing stats broken down by direction, regardless of distance.

Passes to the middle of the field are more likely to be caught by either the offense or the defense, but A/YA is over a yard higher on middle attempts than on those to the left or right, so it looks like the increased risk of throwing over the middle ultimately pays off.

While risk/reward balance favors throwing to the middle, the same can't necessarily be said for throwing deep. The table below shows passing statistics by distance, regardless of location.

While deep passes have an advantage in A/YA and are twice as likely to produce touchdowns as short passes, they're also more than 3.5 times as likely to get intercepted. Due to data limitations as far as precise target distances of each interception, we have no way of knowing if these interceptions typically occur on very long passes—say, 30-plus yards downfield—or on passes of a shorter variety that are still considered deep by PFR. It's also likely that if offenses did start throwing deep more, defenses would adjust and interception rate would climb even higher.

Furthermore, just as with throwing over the middle, talent comes into play—does a team have receivers with the talent (and stamina) to consistently go deep? Passer rating (Rtg) is a lot more sensitive to completion percentage and interception rate than A/YA, so the 8.7-point advantage in Rtg for short attempts perhaps helps to explain why many teams in the NFL are content to run quick-hitting West Coast attacks and entrust their offenses to QBs who don't have exceptional arm strength.

So what are the most fantasy-efficient field locations for targets? The charts below show the fantasy points per target for each location on the field.2

In both real and fantasy football, passes directed to the middle of the field are more profitable. However, while there is no definite answer to the break-even point between short and deep passes in real football, deep attempts are clearly more efficient on a per-target basis in fantasy. If you're looking for pure upside, you're looking for receivers who frequently get targeted 15 yards or more downfield.

While the PPR scoring system is known to equalize RB and WR fantasy production, it also closes the gap between deep targets and short targets. The chart below contains fantasy points per target for each pass location with both scoring systems included side-by-side. 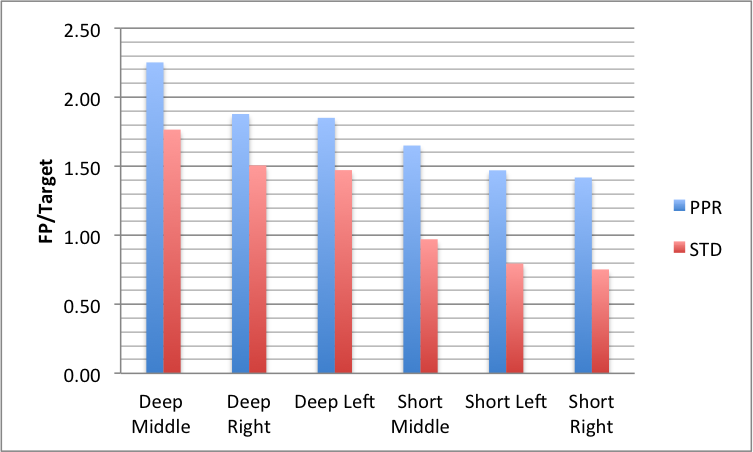 The disparity between short and deep passes is significantly reduced in PPR formats compared to standard formats. To measure exactly how much, we'll use a percentage index where deep targets are valued at 100%, as shown in the table below.

In standard formats, a short target is worth slightly more than half of what is a deep target is worth, but that value climbs to three-fourths when using PPR scoring.

It's important to note that while deep targets are more efficient in fantasy on a per-target basis, they are still completed roughly 40 percent of the time, while short passes are completed roughly 67 percent of the time. As a result, players who see a large percentage of deep targets compared to short targets are often more volatile on a game-to-game basis. Just as with real football, short targets are safer in fantasy—especially in PPR formats. The obvious best of both worlds, then, is a player who sees a high amount of target volume, with a relatively large amount of deep targets for upside supplemented with a steady diet of short targets for consistency.

Finally, let's examine the same data from a QB's perspective. The chart below shows the passing fantasy points per attempt3 by field location.

Short passes are worth roughly 55 percent as much as deep passes, which resembles the relationship between receivers in standard formats. However, since QBs aren't competing for a finite number of his team's total passing production like receivers are, what ultimately matters most for passers is their overall efficiency, regardless of pass distance. A QB's fantasy output would be the same regardless of whether he leads a scoring drive where he racks up 60 passing yards and a touchdown on four pass attempts or eight pass attempts, for instance.

in fantasy football, deep passes and passes to the middle of the field are the most productive on a per-target basis. Short passes are the safest type of passes in real football terms, and because they get completed at a far greater rate than deep passes, short targets tend to allow for more consistent weekly production when compared to deep targets.

However, without more specific publicly available data on average target depth and yards-after-catch production for all locations on the field, there are limits to what current data can uncover. Ideally, we will be able to revisit this study with pass distances broken down into smaller increments, and with YAC data for each reception, but this is a start.4

1. It's worth noting that sacks and sack yards lost are a component of A/YA, but are obviously set to zero in the calculations in this article.

2. Fumbles by receivers were factored in to the calculation of fantasy points at a value of -2 points per fumble.

3. The scoring system used is one point per 25 passing yards, 4 points per TD, and -1 points per interception.

4. If you do find additional information on this topic, feel free to shoot me a tweet @ChrisRaybon.