DraftKings has released contests and salaries for their Week 1 Main Slate. Earlier in the week, I gave my first reaction to pricing on FanDuel. Here, I will compare salaries across both sites to see which players are cheaper on DraftKings, an exercise that can be a useful way to find player value. 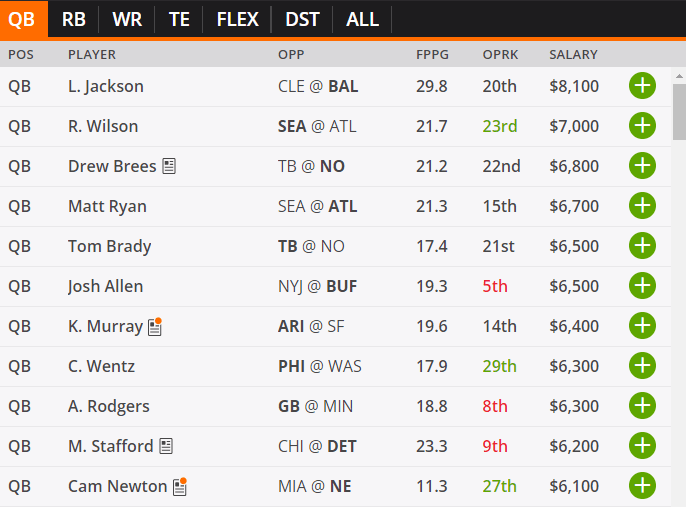 I highlighted the San Franciso quarterback as a value on FanDuel, where Jimmy Garoppolo is priced as the QB10 but he’s even cheaper on DraftKings, coming in as the QB15. Although the 49ers are favored by a touchdown, according to DraftKings Sportsbook, they were exploited through the passing game down the stretch last season, including games of 21.0 and 26.7 DraftKings points allowed to Kyler Murray. If those struggles continue into 2020, these two teams could easily hit the over on this game (46.5) but with a much closer score than expected.

Haskins is priced low on both sites but it’s worth noting that he is all the way down at QB30 on DK compared to the QB23 on FD. Washington isn’t a team that many DFS players will look to in cash but Philadelphia could be a popular team to stack in Week 1. We know that opposing passing games are highly correlated, so if kickoff is approaching and Carson Wentz looks like the chalk for the week, it could be profitable to throw out a couple of stacks on the other side. 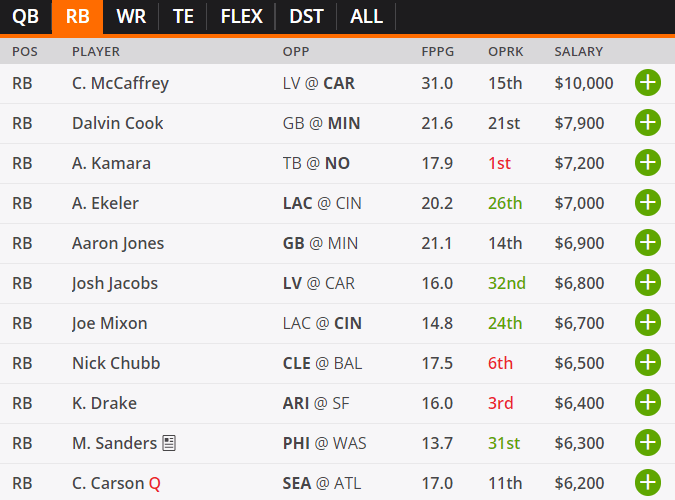 In my FanDuel first look, I mentioned the mess at running back for the biggest favorites in Week 1. Four offenses favored by 6.5 or more have running back committees or ambiguous backfield situations to open the season and whoever is bold enough to take a stance on those committees could profit heavily to open the season. On DraftKings, there’s exploitable value in rostering Tevin Coleman, who is priced as the RB47 but is a fringe RB2 on FD. Even when Raheem Mostert was setting the world ablaze last year, his touch share was still relatively low, a trend for Kyle Shanahan backfields. For those that want exposure to the 49ers but aren’t buying the above narrative that this game could be close, Coleman is a cheap play with massive upside. Or you can implement an underused QB/RB stack and get all the scores.

This is another one of the committees that I discussed above. DK Sportsbook has New England as an early 6.5-point favorite against a Dolphins defense that has improved on paper but still has to show that they are better than the 2019 abomination. A player like Michel is almost always going to have a depressed price on DK—he’s the RB32 here and RB19 on FD—since he doesn’t catch many balls. In addition to not being used in the passing game, the obvious concern is that Cam Newton vultures the goal-line scores. That’s a legitimate fear but also one that’s impossible to predict. If the Patriots live up to the point spread, Michel will be the one helping them grind it out with a lead. 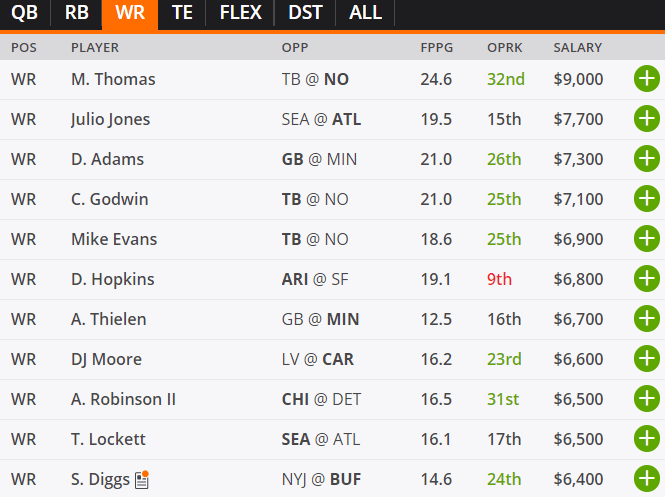 Odell Beckham fell way short of his lofty expectations in Cleveland last year, but it wasn’t due to a lack of volume. His 133 targets ranked 13th among wide receivers and Beckham and Jarvis Landry combined for 52.8% of the Browns’ targets, forming the most concentrated passing attack in football last season. There’s apprehension in season-long circles about investing in this passing game with run-heavy play-caller Kevin Stefanski now in town but that might not matter much in Week 1 if the Ravens jump out to a quick lead—the Browns are 7.5-point dogs. Consider Beckham an affordable correlation play in Baltimore stacks or a cheap way to be contrarian. On DraftKings he’s priced as the WR19, eight spots lower than on FanDuel.

In what should be a relatively low-scoring game—the over/under is just 44 and the spread is 1.5, favoring Detroit—there doesn’t figure to be many highly-owned players but Golladay presents a nice value. There are 13 wide receivers on DraftKings with a higher salary than the Lions primary target but he’s the WR7 on FanDuel. When Matthew Stafford was active last season, Golladay averaged four more DK points per game than when Stafford was out. Chicago comes into the season as one of the better passing defenses in the league but with how efficient the Lions passing games was with Stafford last year, combined with their willingness to take deep shots, Golladay could be a nice contrarian one-off play in tournaments. 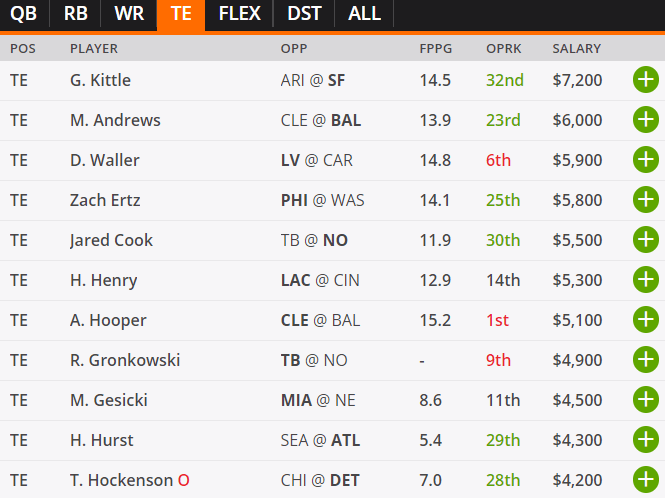 The Colts tight end seemed reasonably priced to me as a top-10 option on FanDuel but he’s priced outside the top 20 on DK. Being a touchdown favorite is a situation that is beneficial for tight ends as they often thrive in positive game flow. After T.Y. Hilton, it’s unclear who will see the second-most targets on this team and when Philip Rovers is given a reliable tight end, that tight end is utilized.

The Raiders allowed the fifth-most DK points to opposing tight ends last season and Ian Thomas will get the first crack at the Vegas defense in 2020. Thomas has averaged over six targets per game over the last two seasons when Greg Olsen was inactive and now Thomas has the starting job to himself. There are a lot of capable pass-catchers in Carolina but new quarterback Teddy Bridgewater has historically opted for shorter throws over the deep variety, which could boost Thomas’s prospects. 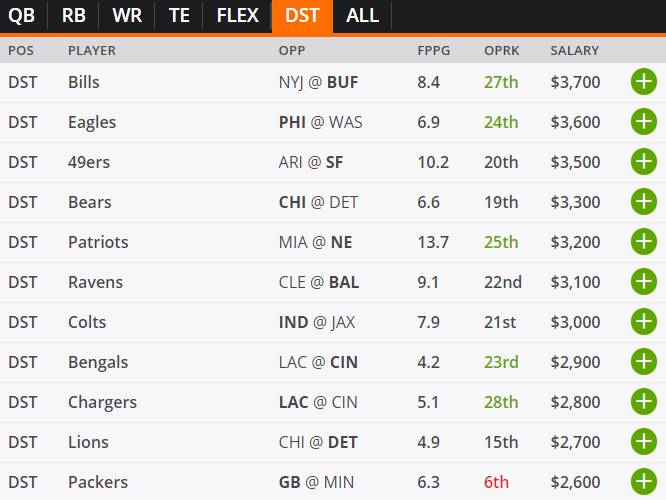 With Tom Brady throwing passes for the Bucs, DFS players won’t be able to target Tampa Bay with their defense like they did when Jameis Winston was there but this is still a situation worth exploring. New Orleans is a four-point home favorite but they are priced as the DST15 on DK while in the top 10 on FD. Punting defense is never a bad idea and the Saints allow for higher-priced skill players in what looks like a week with relatively tight salaries, at least for now.

Baltimore isn’t cheap by any means but they are the biggest favorite on the main slate with five defenses priced higher—on FanDuel, the Ravens are the second-most expensive team defense. Playing with a lead and forcing an opponent to throw in predictable situations creates fantasy points for a defense and Baltimore will be looking to do just that against the quarterback with the second-highest interception rate in 2020