With the regular season still over a month away, FanDuel released Week 1 pricing this week. Injuries and COVID concerns, as well as changes in depth charts, could open up some major values by the time we actually get to the first week of the season but there are still some players that stand out as early values. Below are the ones who caught my eye. 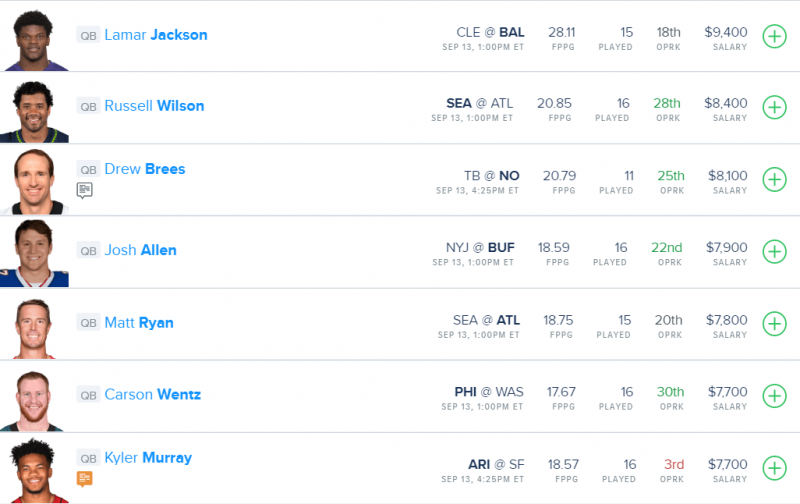 Early Week 1 lines show the 49ers with the second-highest implied point total (27.25) of the main slate. Many players will flock to San Francisco’s running game that dominated in 2019, but the backfield splits could cause headaches. While this line (-7.5) heavily favors the home team, the 49ers allowed 21.9 fantasy points per game to opposing quarterbacks from Weeks 9–17, including big games to Kyler Murray, their Week 1 opponent. That could mean shootout potential against this improved Arizona offense and more throwing for Garoppolo against a Cardinals defense that ranked last in schedule-adjusted fantasy points allowed (aFPA) to quarterbacks last season.

Two quarterbacks making their team debuts are in favorable spots. Cam Newton ($7,300) is priced as the QB11 as a 7-point favorite against the Dolphins, who come into the season as a bottom-six team in aFPA to quarterbacks. While Miami has made vast improvements in the secondary, that doesn’t keep Cam from using his legs. Philip Rivers ($7,100) will make his first start as a Colt against the lowly Jaguars. Like San Francisco, the public figures to be on Indianapolis’ run game but Rivers and his pass-catchers are all very affordable.

Washington comes into the season ranked in the bottom 10 in aFPA to every position and the Eagles get the honor of opening the season against the DC Snyders. Philadelphia is favored by just under a touchdown and while Carson Wentz ($7,700) isn’t necessarily cheap, this matchup gives him similar upside to quarterbacks priced in the $8,000 and $9,000 range. 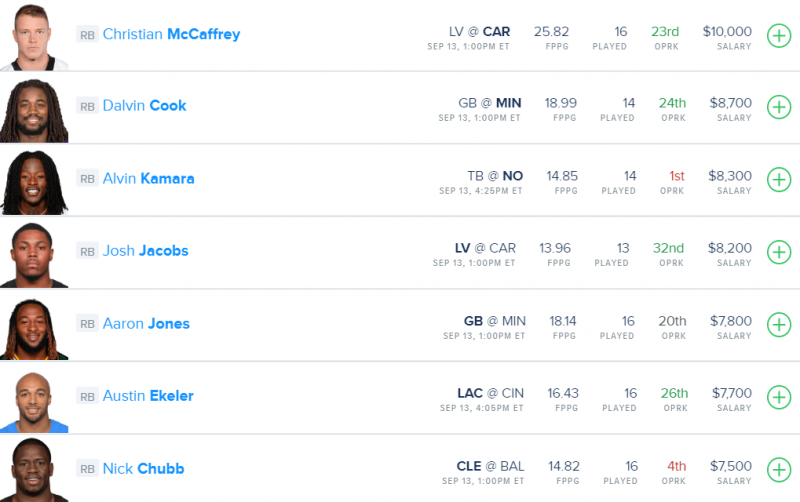 If Miles Sanders lives up to the offseason hype, this is the lowest that his salary will be all season. The Eagles' back averaged 15.2 FanDuel points per game in 2019 when Jordan Howard was inactive and it appears that Philadelphia is ready to let Sanders be their workhorse in 2020. The 6.5-point spread suggests a favorable game script for the Eagles against a Washington defense that allowed seven running backs to break 20 FD points last season (including one from Sanders) and three more to go over 15.

Tournament fortunes may be decided on who can best solve the running back by committee puzzle. Four teams on the main slate are favored by a touchdown or more and all have unclear backfield situations.

Two of these teams—the Ravens and Patriots—feature mobile quarterbacks, making the situations even more frustrating. Week 1 could be a rare instance where running backs in cash games don’t come from the biggest favorites but there is gold to mine here for GPPs.

There’s been considerable offseason hype for rookie Zack Moss in Buffalo but Devin Singletary ($6,300) believers could be in for a treat to kick off the season. Priced as the RB16, Singletary finished 2019 averaging 19 touches per game over the final 10 weeks of the season, including the playoffs. During the final month of the season, the Bills back averaged 49.4% of team touches, a number that would have ranked second behind Christian McCaffrey over the entirety of 2019. Buffalo is favored by 6.5 at home. 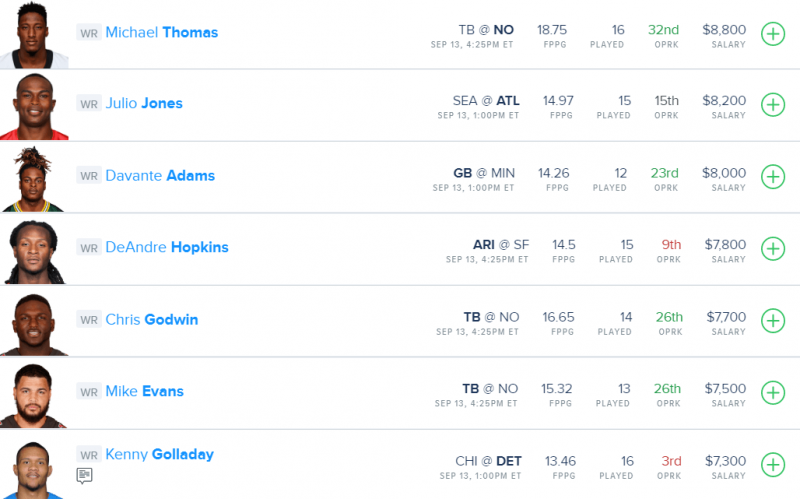 Baltimore is sure to experience some regression in their passing game this season but that might have to wait until at least Week 2. The Ravens are expected to light up the scoreboard against Cleveland and “Hollywood” is the most affordable option in this passing offense. The knock on Brown is volume but before his injury, the Baltimore receiver was averaging a 23.7% target share—in his first five games in the league. That number is sustainable over the course of 2020 and his ability to stretch the field is exactly what you’re looking for on FanDuel, where scoring trumps volume.

A great early-season DFS strategy is to target breakout candidates before their price spikes. Two players that stand out in that capacity are D.J. Chark ($6,600) and Terry McLaurin (6,500), who are priced as the WR16 and WR19, respectively. Both are on the wrong side of potential blowouts but that means heavy ownership will likely be on the other side of the ball. As mentioned with Miles Sanders, if these two receivers mett expectations, they won’t be in this price range much longer.

Before his season-ending injury in 2019, Preston Williams ($5,300) was averaging 7.5 targets per game through Week 9, a top-20 mark among wide receivers. DeVante Parker’s breakout campaign has most fantasy players overlooking Williams but this could be a 1a/1b situation, especially with Albert Wilson and Allen Hurns opting out of 2020. At least for Week 1, Miami receivers will be catching balls from gunslinger Ryan Fitzpatrick in a game where they will likely be playing catch up. 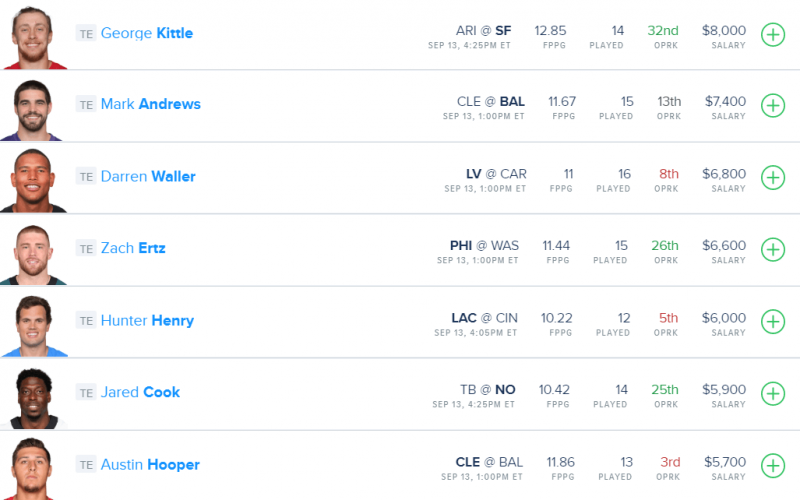 As was the case much of last season, the values at tight end look as if they will slant towards the top tier in Week 1 but Jack Doyle stands out as an affordable option in an advantageous situation. Positive game script tends to favor tight ends and the Colts are 7-point favorites. After T.Y. Hilton, the target distribution is wide open in Indianapolis and Philip Rivers has a history of looking to a reliable tight end.

Hayden Hurst ($5,200) will be taking over for Austin Hooper as Atlanta’s starting tight end, a role that afforded Hooper 7.5 targets per game and six total scores in 2019. While it’s no guarantee that Hurst absorbs all of that work, his salary his low enough to roster him with that uncertainty. Implied totals and over/unders aren’t as important for tight ends as game script is but it can’t hurt that the Falcons are just a 1-point dog against the Seahawks in a game with a 49-point total.

The Raiders were a passing defense to target almost blindly last season, be it with wide receivers or tight ends. With Greg Olsen now in Seattle, Ian Thomas ($5,100) will get his crack at starter snaps. In the nine games over the last two seasons that Ian Thomas has played without Greg Olsen in the lineup, he has averaged 6.1 targets per game. 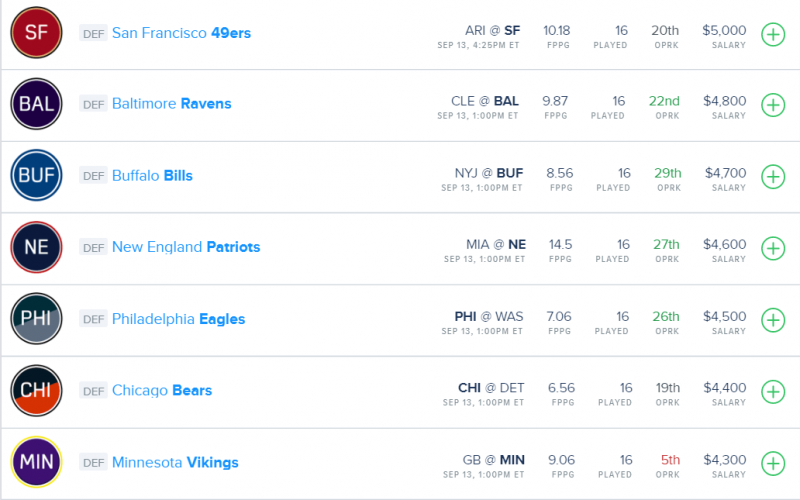 Indianapolis is the only team favored by at least a field goal that isn’t priced as a top-10 defense. With Jay Gruden (offensive coordinator) and Ben McAdoo (quarterbacks) now on the coaching staff, the Jaguars offense could throw more than the 2019 iteration, even when not in negative game script. Those passing opportunities lead to fantasy points for opposing defenses, especially when it’s against an offensive line the Justin Edwards ranks in the bottom 10 going into the season.

The Raiders ($3,200) are only a slight favorite (-1.5) but they are the cheapest favorite of the week, priced behind 22 other defenses. While Las Vegas isn’t a good real defense, they are facing a quarterback making his first start for a new team. Similarly, the Chargers ($4,200) are at home and will get the first crack at rookie Joe Burrow. Their salary isn’t so cheap that they will pop as a value but they getting to face a quarterback making his first career start.