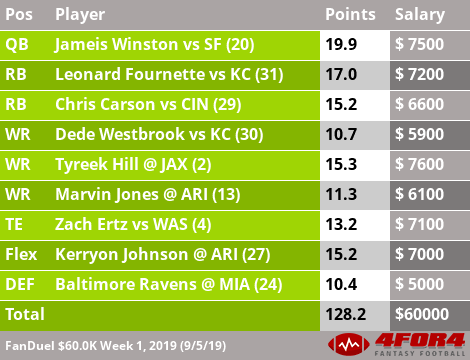 Jameis Winston ($7,500) is our top value at quarterback. The Buccaneers are (slight) favorites, and Vegas expects them to score more than 25 points. While Winston has been somewhat inconsistent over his career, we expect coach Bruce Arians to improve his efficiency. The best alternative to Winston is a small downgrade to Lamar Jackson ($7,400). The Ravens are heavy favorites against the Dolphins, though Vegas expects them to score only 22 points. That said, Jackson has an unusually high floor due to his rushing workload.

Leonard Fournette ($7,200) is a top-3 option at running back by both value and projected points. Playing at home this week, we have him projected for over 21 touches. His point projection puts him between Saquon Barkley and Ezekiel Elliott, both of whom are at least $1,300 more expensive. If you make the downgrade at defense discussed below, then you can consider swapping out Fournette for Nick Chubb ($7,400). We have Chubb also projected for over 21 touches, but unlike Fournette, he is playing for a home favorite this week, which helps reduce risk due to poor game flow. (However, with Duke Johnson traded away, Chubb is also likely the passing down back, so he is safer than Fournette for that reason as well.)

Dede Westbrook ($5,900) is a top-12 value at receiver and sits in the top 20 by projected points. Last season, he averaged 6.3 targets and 0.3 touchdowns per game. With Marqise Lee injured for most of preseason, Westbrook is likely to be Nick Foles's favorite target in Week 1. The best alternative to Westbrook is to pay up slightly for Sterling Shepard ($6,000). The latter averaged 6.7 targets and 0.25 touchdowns per game last season when he had to compete with Odell Beckham for targets. With Golden Tate also suspended, Shepard should see a large volume of targets.

Zach Ertz ($7,100) sits in the top three of our tight end rankings by both value and projected points. He is also playing at home this week, which matters for tight ends. If you have $200 to spare (via the downgrade mentioned below), you can consider upgrading to George Kittle ($7,300), who sits atop our rankings by both metrics. Both Ertz and Kittle saw over eight targets per game last season and scored at least 0.3 touchdowns per game.

The Ravens ($5,000) are our top option at team defense, by both value and projected points. They are heavy favorites against the Dolphins, whom Vegas expects to barely score more than 15 points. The Dolphins have a poor offensive line that should give up sacks and have Ryan Fitzpatrick, no stranger to the interception, under center. It's an ideal setup for a fantasy defense. The Eagles ($4,600) are projected over one point below the Ravens but will save you $400, enabling any of the changes described above. While Vegas expects their opponents, the Redskins, to score over 19 points, the Eagles are even heavier favorites. Without Trent Williams this week, the Redskins have one of the league's worst offensive lines, and they face one of the strongest defensive lines from the Eagles. Expect Case Keenum to be helped off the ground at least a few times in this game. 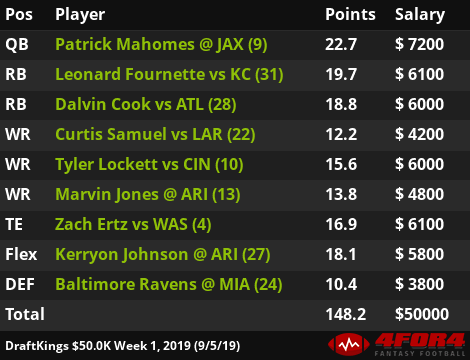 Kerryon Johnson ($5,800) is our third-best value at running back. While on the road, he is playing for a favorite and against a poor defense. As discussed above, we have him projected for over 20 touches in this game. The best alternative to Johnson is another running back we discussed above, Chris Carson ($5,700). The Seahawks are heavily favored at home. While we have Carson projected over one point below Johnson, due to DraftKing's full PPR scoring, we expect Carson to likewise see 20 touches.

Tyler Lockett ($6,000) is a top-five value at receiver and ranks top-10 by projected points. While he averaged only 4.4 targets per game last season, his volume should increase significantly as he moves into the slot role vacated by Doug Baldwin. If you want a safer floor, you can downgrade to Tyler Boyd ($5,800), who is also a top-10 value at the position but averaged 7.7 targets per game last season, giving him a significantly higher floor.

Marvin Jones ($4,800), who we locked into our lineup at FanDuel, is the top value option at receiver for DraftKings. As described above, he averaged nearly seven targets per game last season, making him safe for use in cash. The best alternatives to Jones are two other receivers we discussed above: Dede Westbrook ($4,800) and Sterling Shepard ($5,000). Both of them saw over six targets per game last season and have reasons to expect their target volumes to increase this week.

For the same reasons discussed above, the Ravens ($3,800) are our top projected defense at DraftKings as well: their opponent is expected to score barely more than 15 points and they face an interception-prone quarterback behind a bad offensive line. However, the Eagles ($3,600) are again worth consideration. Their opponents, the Redskins, are expected to score around 19 points but have huge problems on their offensive line this week that the Eagles should be able to take advantage of. While we have the Eagles projected over one point below the Ravens, making that swap is another way to get funds for any of the upgrades mentioned earlier.