I recently completed an IDP mock draft with some of the finest IDP minds in the industry. It was a 28-round snipe-filled bloodbath. I know one of the questions facing managers is where do to draft your first defender. Arguments can be made to wait and build out your entire offense first, while others say target IDP early on in your draft. Ultimately, it depends on your league's scoring, the flow of your draft and the guys you covet.

In this article, I'll be walking through my draft from the 11th spot using Draft Hero until Round 9. I really hope this provides some insight on who's available and who to target at specific rounds of your draft.

First, here are the scoring settings: 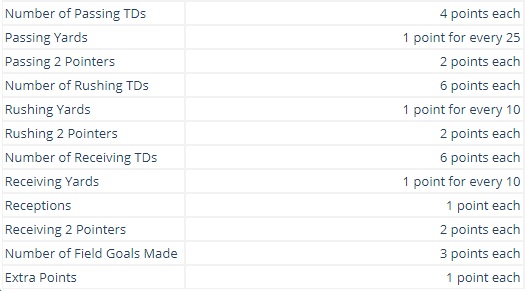 In this instance, we're looking at a balanced format, with a slight lean towards linebackers with the 1.5 points per solo tackle. Linebackers who accumulate solo tackles are king here.

In the words of Mortal Kombat; FIGHT! When the draft commenced, Zeke's contract issues were just starting to materialize, but he still went second overall. I was targeting Melvin Gordon, even with his contract dispute. However, he went two picks before me. I decided to go with Bell. I still like to grab an RB who's going to be on the field in all situations and Bell fits that mold. Sure, he sat out last season, but he comes into the season fresh and it doesn't take much to get acclimated back to play. Get the ball, find the hole, run the ball.

I'm hoping the addition of Kelechi Osemele fortifies the line. Bell should keep opposing defenses honest and prevent stacking the box because of his threat out of the backfield. Having a talented back should also help Darnold's development.

Bell finished the 2017 with 405 total touches. In PPR formats, Bell averaged 22.9 points per game. Our rankings and projections guru, John Paulsen, has Bell pegged for 311 total touches while Bell said himself he's going to get 500. Let's hope it's somewhere in the middle.

Speaking of Odell, I was able to snag him with my pick in the second. With all of the hoopla that surrounds OBJ, he's one of the most efficient receivers in the league (when he's not proposing to field goal nets). There really weren't any RBs that jumped out as must-haves in the second, so with it being a PPR, I targeted an elite, high-volume target receiver. At this point, there were five receivers that fit the mold here as bonafide WR1. My Cleveland homerism aside, my favorite is Odell Beckham.

Our own TJ Hernandez penned some poetry about Odell's fantasy impact in The Land. As mentioned, he's been one of the most efficient receivers with average to below-average QB play. Beckham gets the upgrade with Baker Mayfield, someone who has the arm and arm talent to get Beckham the ball, but is in an offensive system designed to his strengths to air the ball out. Outside of an injury-shortened 2017 season, Beckham has received at least 120 targets in every year as a pro. I know the Browns have other weapons—Jarvis Landry, David Njoku and Antonio Callaway—but OBJ is an elite receiver and Baker should key in on him multiple times a game.

In a PPR, seeing Keenan available, I couldn't click 'Draft' fast enough. With what should be a high-volume RB already on my roster, I continued to target the WR position in the third round and have two potential top-10 receivers. In this setup, you have the option of starting four receivers, so I was happy to have two who have the talent of Allen and Odell.

A.J. Green as was one of the top alternatives, but I wasn't sure the extent of his injury at this point. Sure, Allen has his injury history, but he's healthy now. A healthy Hunter Henry and an emerging Mike Williams is going to open the field up for Allen. Allen has received 199 targets over the past two seasons, so he is the apple of Philip Rivers's eye. John Paulsen has Allen pegged for 100-plus receptions this seasons.

This might be one of the picks where I'd like a do-over. Not that I don't like Mack, but his PPR upside is limited—38 catches over last two seasons. When I picked him here, I was drawn to the potential volume, as he should be the bell cow back. He emerged last season with a 4.7 YPC average and recorded 10 total scores.

According to our own, Justin Edwards, Mack is running behind the 4th best offensive line and has a favorable schedule over the first five games of the season:

Mack has picked up right where left off in camp and it's been glowing reports for Quenton Nelson in his run blocking abilities, which bodes well for Mack's prospects this season. The Colts didn't draft an RB, plus, didn't bring any true threats over free agency. I'm not even worried about the D'Onta Foreman signing.

This was more of a value pick here. A few of the players I was hoping to land here got sniped in James White, D.J. Moore and Chris Godwin. I'm happy, though, to get another potential high-volume back in a favorable offense called by Greg Roman. Roman-led offenses tend to favor the run and perform very well. In 2015 and 2016, the Bills led the league in rushing yards with 2,432 yards in 2015 and 2,630 yards in 2016.

I don't see Gus Edwards as a viable threat to Ingram's usage in this offense. He's proven more than capable in the run and has established himself as a reliable pass-catching option, averaging nearly 44 receptions per year since 2015. As Lamar Jackson continues to develop in the offense, he's going to lean on his veteran back in Ingram.

Evan Engram was tempting here with all of the injuries befalling the Giants' receivers and I almost clicked on Tyler Boyd, but I really liked Ingram's value here.

Mike is an IDP veteran, writing about and ranking IDP for over seven seasons and playing in IDP leagues since 2007. He finished 6th in overall IDP rankings and 1st overall In LB rankings in 2014 at FantasyPros. When he's not poring over IDP depth charts, he can be found agonizing over his Cleveland sports teams.

More from Mike Woellert
Most Popular