One of the toughest things to do in fantasy football is balance metrics with film evaluation.

Rushing Expectation is my attempt to find that perfect balance for the running back position.

Now entering year two of the Rushing Expectation methodology, the clear focal point of my contribution to the industry, I couldn’t be more excited to partner with 4for4 Football. My goal has always been to provide the reader with information from both my charting process and signature metrics in a clear, concise, and actionable manner. To help bridge the gap, I believe that transparency and consistency are extremely important. This is especially true with a unique series.

The following guide will provide you with an introduction to the Rushing Expectation methodology, highlight some exciting new improvements, and give you an idea of what to expect in 2017.

Still not a 4for4 subscriber? Sign up now for 4for4's Classic, Pro, or DFS subscription.

Most of you are familiar with yards per carry. The problem with using yards per carry in our analysis is it does not show the rate at which a running back is successful. Big plays and short-yardage situations can skew yards per carry, limiting its use both as a predictive metric of future success, as well as an explanatory metric of past performance.

Success Rate: A Better Alternative to Yards per Carry

This leads us to my favorite stat, Success Rate (SR), which is representative of consistency of success relative to down, distance, and situation. Per Football Outsiders, a run is considered a success if it satisfies the following benchmarks:

The separation of offensive line play from the back running behind it is not easy to quantify. Clearly, not all offensive lines are created equal.

What if there was a way to quantify an expected success rate for each running back based on his team's offensive line play?

From there we could find out if a running back is performing above or below expectation relative to his offensive line.

If this idea intrigues you, I have great news. The signature metric for this methodology allows us to do just that.

Expected Success Rate: How Good Is a Running Back's Blocking?

Expected Success Rate is a phenomenal metric that measures how successful a running back should have been based on the performance of his team's blocking.

We can calculate Expected Success Rate for both a running back's rushing attempts and his receiving targets.

2. Next, I ran a regression on Team Success Rate and Adjusted Line Yards, a metric that assigns a certain amount of responsibility to the offensive line for every rush based on the length of that rush (for instance, the offensive line is given most of the responsibility on short runs close to the line of scrimmage, but doesn't get as much credit for yardage gained by the running back farther downfield). 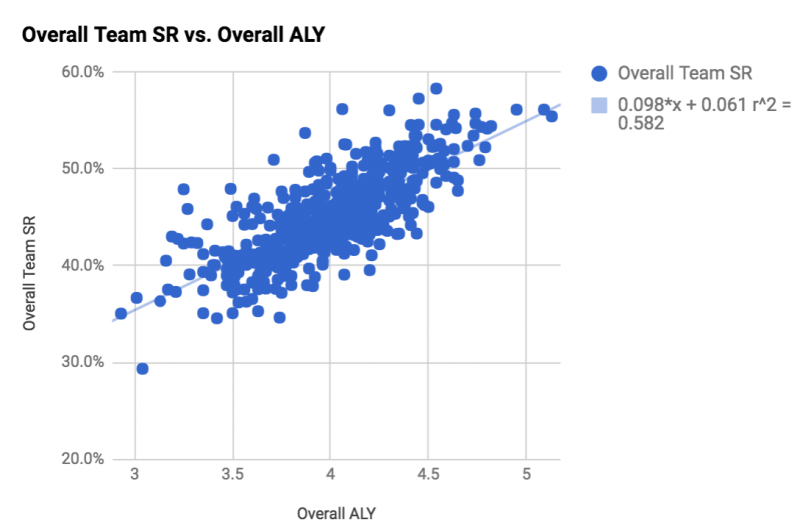 The resulting linear equation is an Expected Success Rate for rushing attempts for each individual team.

Now we have a second linear equation, this one of the Expected Success Rate for a running back's targets for every individual team.

If you haven't already noticed, the biggest improvement to the charts this year is the color-coded heat maps. In addition to allowing you to quickly visualize how a running back has been used by his team, these heat maps will also help you compare a running back being charted to the rest of the sample (which I can proudly say is now 60 running backs deep).

Related: What are the Most Predictable Year-to-Year Stats for Running Backs?

The 3 Types of Charted Rushing Attempts

A running back's rushing attempts have been broken down into five total directions, or lanes, but there are really just three distinct lanes: middle/guard tackle, and end, with the latter two broken down by left/right.

1. Left/Right End: When a running back runs the ball outside the tackle box, most often with the aim of getting to the edge and turning the corner, usually on a toss, sweep, or stretch play.

2. Left/Right Tackle: When a running back runs to the inside or outside of a block set up by one of the offensive tackles, usually on traps, counters, and various power or zone concepts.

3. Middle/Guard: When a running back runs up the middle off blocking by the interior line (center, guards), usually on dives or draw plays.

The 4 Types of Charted Targets

A running back's targets have been broken down into four areas of the field.

1. Flat Targets: When the running back runs a route horizontal to the line of scrimmage before heading up field.

2. Inside Targets: When the running back runs a route through the offensive line as the play develops.

4. Wide Targets: When a running back lines up on the line of scrimmage just like a wide receiver, and runs his route from there instead of starting behind the offensive line.

I decided to go with player targets instead of player receptions. The obvious reason is that it increases my sample size, but more importantly targets quantify what happens every time the quarterback throws to a running back’s area. I find target data much more intuitive than reception data.

The Success Rate vs. Expectation chart is where I compare a running back's Success Rate to both his Expected Success Rate, as well as the league average. You'll also notice another new addition:

Again, I’m really excited about the heat maps (especially in this chart), as they allow us to visualize how well a running back has performed relative to the circumstances surrounding him.

As you can see from the faded sections in the sample chart above, Isaiah Crowell had less than five targets in the flat, and he also handled fewer than 10 rushing attempts toward left tackle or left end. This color coding should go a long way towards helping you decide which data points are the most relevant. Put another way, it's important to use the first two charts together, as a small sample size in a particular direction could positively or negatively skew Success Rate.

One more note: I remove un-catchable balls, such as ones batted down at the line of scrimmage or thrown out of bounds, from the sample completely when calculating Success Rate, but those targets are still included for reference in the directional sample size.

The final and most important of the three charts, Overall Analysis, displays a big-picture snapshot of how well a running back has performed, based on Rushing Expectation charting data.

The top portion of the chart gives the Success Rate, Team Expected Success Rate, and the league average Success Rate for both a running back's rushing and receiving plays. You will also notice a few other key stats complied charting process, which I'll explain it detail below.

Before/After Contact Yards: Yardage per touch gained before and after the defender makes first contact. To illustrate, let’s take a look at a 27-yard run from Ryan Mathews against the Jets in Week 3 of 2015. Mathews gets the ball at his own 34-yard line and is first touched at the 38, which means he gained 4 yards before contact. He then breaks free all the way to the Jets' 34, for another 28 yards after contact:

Yards after contact is clearly a skill, but before-contact yards are extremely relevant as well. Running backs who consistently gain good yardage before contact in spite of inferior run blocking are very intriguing. Elusiveness behind the line of scrimmage is an extremely underrated, but prevalent, ability among the league’s best runners.

Facing 7 or less in Box: Displayed on the left his how many rushing attempts a running back had when facing a base box or softer, and on the right is his Success Rate against base or softer boxes.

Facing 8+ in Box: Displayed on the left his how many rushing attempts a running back had when facing a loaded box, and on the right is his Success Rate against loaded boxes.

The sample size of each player is something I put a lot of thought into, especially since running back is a little different than the wide receiver position; even when you add up a running back's total amount of potential touches in a given game, it usually doesn’t compare to the amount of routes a receiver runs.

There are two levels of sample size in my methodology:

The following is what gets charted for each sample:

The main goal of Rushing Expectation is to mix metrics with film evaluation.

In the interest of limiting an already overwhelming amount of numbers, I will not be publishing a 1-7 scale for each attribute -- at least on the surface. I feel that translating grades into clear, easy-to-understand language is a much better way to bring you on this journey.

For reference, however, below is the scale I was taught when learning how to evaluate running back talent. Just remember that in future Rushing Expectation articles, I will be using the corresponding language, not the numbers, in reference to the scale.

For example, if I say “adequate overall strength and below-average power in short yardage situations,” it means my overall play strength grade after film evaluation was a 3 on the 1-7 scale.

Running Back Traits Being Evaluated

Below are six key traits for running backs that I evaluate in my charting process:

What to Expect from Rushing Expectation in 2017

In hindsight, there was one glaring shortcoming of the 2016 series: the focus was on individual running backs, rather than entire backfield situations. Sure, I was down on Duke Johnson and Giovani Bernard relative to the optimistic stance of most analysts — but I failed to chart beneficiaries like Isaiah Crowell and Jeremy Hill.

So while there may have been value in avoiding guys like Duke and Gio in drafts based on my analysis, there is far more leverage in shedding light on an entire backfield, especially in committee and/or uncertain situations. (At least I got this right once.)

Related: When Should You Draft Your Running Back?

Going forward — and likely at the expense of my social life — Rushing Expectation will chart all members of a potential committee backfield, where applicable. In fact, the focus will be running backs that have unclear fantasy value heading into '17; you probably don't need me to chart David Johnson again to tell you he's a first-rounder.

So now we are looking at double the amount of players charted each offseason — but also in a more concise manner. This will give you double the value over the same amount of articles.

Running Backs to be Charted for 2017

Gaining Access to the Complete Collection of Rushing Expectation Profiles

Due to the insane amount of work that goes into charting each of these profiles, access to the complete Rushing Expectation collection this year will require at least a 4for4 Classic Subscription ($29).

Without a subscription, only 11 of the 21 profiles will be accessible.

Hopefully this walkthrough gave you a better idea of what to expect. Of course, if you have any further questions feel free to contact me on twitter @JoeHolka.

Again, transparency is the number-one goal in my process, and I hope you enjoy the '17 version of Rushing Expectation.